A Cat For All Seasons 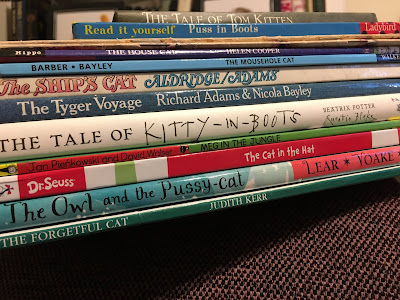 Today was international cat day, and it’s been rather a fun exercise to meander through the many shelves to pull out some of our brilliant picture book odes to the feline. Here's a miaow to our favourite classic cats, with new cats on the block and some marvellously arty cats to follow. We'd love to know your favourites too. 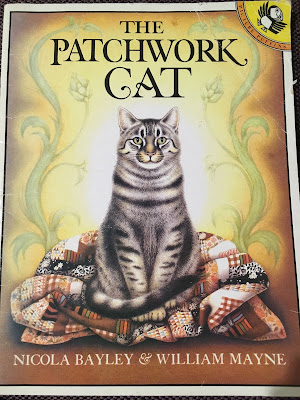 Some of my favourite illustrators of all time seem to harbour a penchant for the fabulous feline. My collection of Nicola Bayley's tales have been a treasured possession since childhood. The Patchwork Cat, by Nicola Bailey and William Mayne is a gloriously illustrated and lyrically written tale of a cat whose beloved blanket is disposed of for a newer version. But she loves her old rag and sets off in pursuit, finding herself lost and consigned to a dump... will she ever see her home again? Bayley also teamed up with Richard Adams (of Watership Down fame) to produce another catty classic - the poetic The Tyger Voyage about two adventurous feline brothers who set off to explore the world. Think Jules Verne for Tigers... Finally she worked with Antonia Barber on the classic Cornish tale of Mousehole fame about Mowzer the cat and her owner Tom who brave the Great Storm Cat to save their village and bring in some fish. 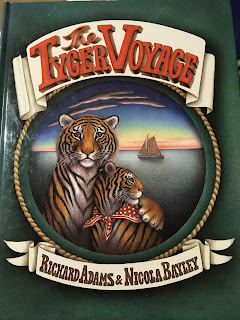 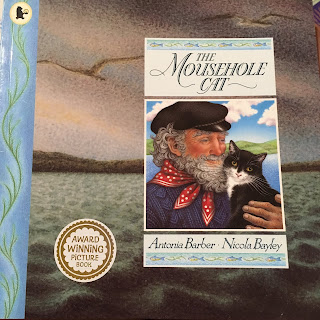 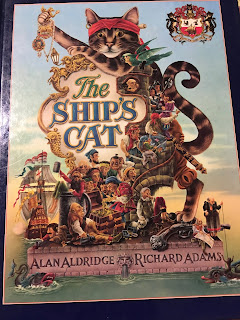 In a similar vein Richard Adams has also written a beautiful volume The Ship's Cat with Alan Aldridge which follows the swashbuckling adventures of another adventurous moggy - a thoroughly English cat, risking perils of the seas for Queen Elizabeth I against the Spanish threat; and Helen Cooper's The House Cat is a sumptuously illustrated and warmtale about a cat who is moved away from the place he really considers his home with owners who do not really appreciate him. We follow his harrowing journey home, all the way back to his little girl from the flat upstairs and the place he really belongs. 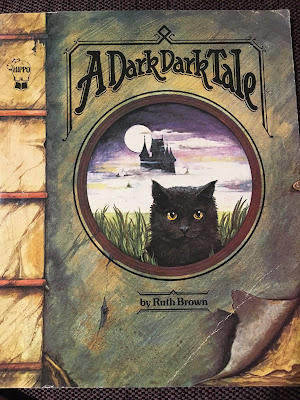 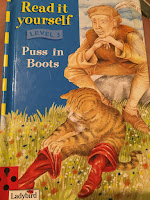 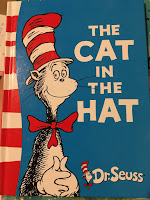 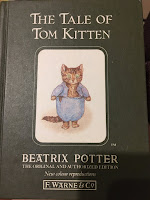 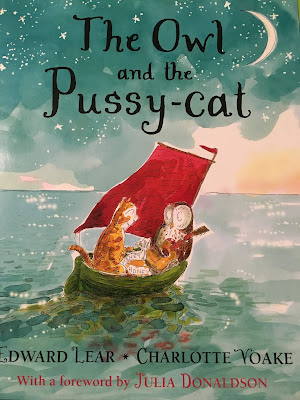 Next, we have an appropriate marriage of two recently published celebrations of Edward Lear's most famous couple The Owl and The Pussy-Cat. Firstly a stunningly illustrated gift version of the original, then a sequel from the wonderful Julia Donaldson, herself a devotee of Lear and his talent for nonsense poetry. Lear originally wrote the illustrated poem for the poorly three year old daughter of a friend, and I've found it is one of the best first poems to introduce to a child. The girls particularly love the poem set to music as part of the fantastic Funkey Rhymes CD. Charlotte Voake's illustrations are simple yet dynamic. They convey movement, lightheartedness and a splash of childhood joy. I love how they look like watercolours and you can see some of the brushstrokes - a great inspiration for budding artists to emulate. Donaldson's sequel The Further Adventures of the Owl and The Pussy-Cat is also illustrated by Voake, and with Donaldson's seemingly effortless genius with rhyme, the tale continues in seamless form with the honeymoon of the unlikely couple. Following the loss of their wedding ring, the two are thrust on new adventures where they meet many others of Lear's colourful creations - The Pobble who has no toes, the Chankly Bore, even the Jumblies. It's brilliant. A wonderful Christmas gift for any child (the sequel even comes with a CD of Donaldson narrating the poem). 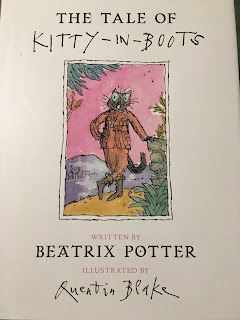 Finally, a couple of new offerings from classic authors.  Last year Quentin Blake was invited to illustrate an unpublished story by Beatrix Potter, The Tale of Kitty in Boots, rediscovered after 100 years. Potter said in letters that she had wanted to finish the story but "interruptions began", including the First World War, her marriage and illness. Her tale as she describes it is about "a well-behaved prime black Kitty cat, who leads rather a double life". Beloved classic characters also make cameo appearances, but Blake's illustrations give the book a more modern feel. 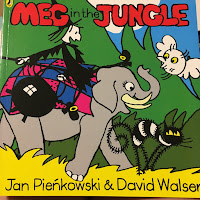 Meg and Mog by Jan Pienkowski and Helen Nicholl were also solid childhood friends. In 2016 Jan brought out a third title in a collaboration with David Walser. The illustrations are iconic - bold blocks of colour and distinctive soundbubbles. My edition of Meg and Mog is just about still in one piece... 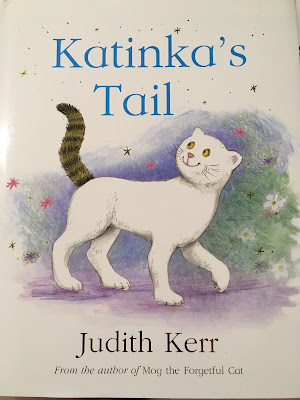 Finally a huge success is Judith Kerr's latest feline picture book. 47 years ago Kerr wrote about her cat Mog, mentioned above as a true classic selling over 3 million copies. Mog has long since passed away - controversially perhaps Kerr even wrote about this in a lovely book about the loss of a pet. Last year Kerr, at 93 and having had 9 cats through her lifetime, brought out a stunning book with a new feline character (her latest cat Katinka) entitled Katinka's Tail - described by the author as "a white cat with a tabby's tail that doesn't belong". When people point out the incongruent markings, we are told she is a perfectly ordinary pussy cat... except for her (rather magical) tail. Culturetot immediately fell in love with this beautiful book, and so did my mum. At 93 Kerr's work is still exquisite, long may she continue to create. (For more on her background and inspiration see this post on The Tiger who Came to Tea). 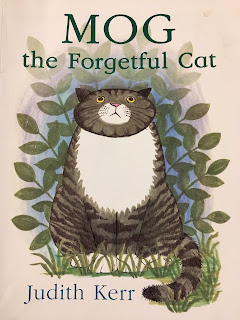 Disclaimer: Most of the books discussed we own and several copies are being passed down the generations, but thanks go to Harper Collins, Warne and Puffin for review copies of recent editions.
Posted by MuseumMummy at 01:23 43 comments: 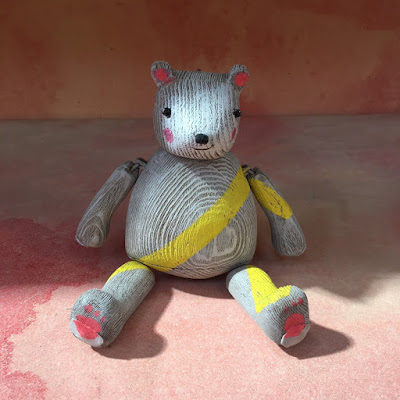 One of the more adorable shows we've seen this year is the warm-hearted, tear-inducing tale of a class bear, much loved and lost, sought and found. Each of Julia Donaldson's illsutrators bring a different flavour to her books and the combination of Julia Donaldson's storytelling and Rebecca Cobb's illustrations seem to produce tales uniquely brimming with emotion. Their first joint endeavour was the stunning Paper Dolls (probably my favourite of Donaldson's books). A loving mother helps her little girl make a chain of paper dolls, which become the child's most beloved play things. They accompany her on adventures, they face perils and experience wonders with her and all the time laughing and singing "You can't get us. Oh no no no! We're holding hands and we won't let go. We're Ticky and Tacky and Jackie the Backie and Jim with two noses and Jo with the bow!". Then sadly one day a little boy snips and destroys them, believing they are gone forever; but of course they aren't - they fly singing into the girl's memory. They join her most treasured things and as she grows into a girl and a mother they remain in her memory and she too helps her own little girl make some paper dolls. This stunning book shows the real value of legacy, and how our acts of love and creativity with our children (and those of my own mother with me) will always live on. 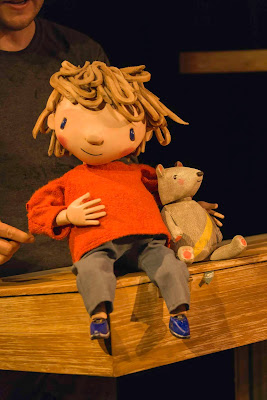 The more recent The Everywhere Bear has a similar flavour and skipping rhyming text. "With her blue pointy shoes and her hair in a bun, Mrs McAllister teaches Class One...." Just like many reception children (and Culturebaby as no exception) their classroom has a much loved pet that the children covet and wait in earnest to take home for the weekend. Ours was Charles. I must confess I have mixed feelings about Charles. Every Friday, Culturebaby would emerge from the classroom crestfallen: it wasn't her week. She hadn't done that special thing to earn her time with the picky penguin. But then her moment arrived, the look on her face, the excitement.... and the consequent memories. Perhaps it was worth the wait after all, and the pressure to show Charles a good time after his litany of weekend jollies to a range of exotic locations. Culturebaby took Charles on a boatride, to  Hampton Court, to the lido, he even did violin practice. Both girls still look back on it as a particularly happy weekend. 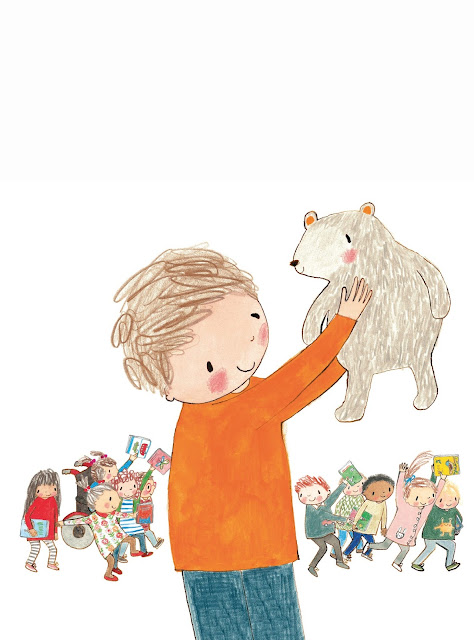 Donaldson's Charles is the Everywhere Bear and he enjoys a range of activities with his Bijoux class of 19. Matt is new, so it is decided that he will take the bear home for the weekend. However, on the way to school the bear is misplaced and he finds himself disppearing down a drain, washed out to sea, caught in a net, displayed in a fish shop, thrown in a skip, and finally reeking of seafood he is picked up by a seagull and fortuitously dropped back near his school to be saved by the local librarian. 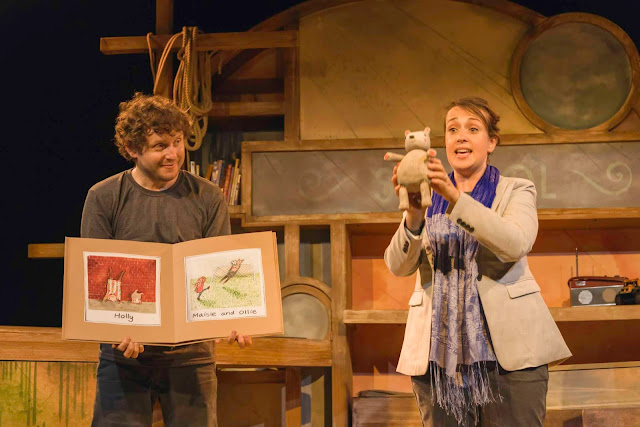 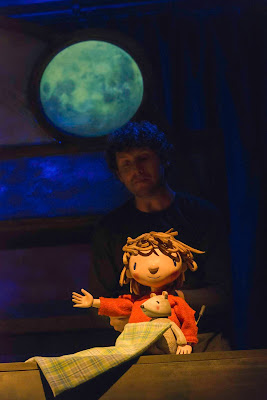 The book is sweet, with adorable illustrations and Stickman-like it is an adventure with a happy ending. However, it is Peter Glenville's stage show that really brings this book alive, adding emotive episodes in spades and turning a cute book into a moving classic. In the show we meet Matt, not just a new boy but a nervous new boy with no friends yet. He is delighted to have the bear for the weekend and develops a close bond with him - spending quality time and growing very attached to him in the absence of real children to spend time with... it's hard being new. Matt is therefore completely devastated when, distracted by a cat in the rain, he misplaces the much-loved bear on his way to school. Wracked with worry he is unable to stop thinking about the lost toy. Meanwhile, nervous and alone, the bear is washed out to sea, destined for a series of challenging adventures as he journeys further and further from home - finally ending up in a tip alongside a Barbie with a broken heart. His care to an injured seagull finally leads to his happy return to the librarian that sees him home. The use of emotive music, humour, clever puppetry and additional scenes really add to the original tale, enhancing it and pitching it so beautifully as a tender tale of friendship and perserverance. 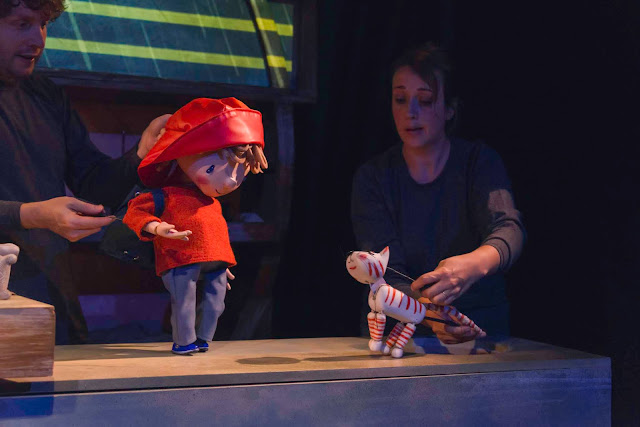 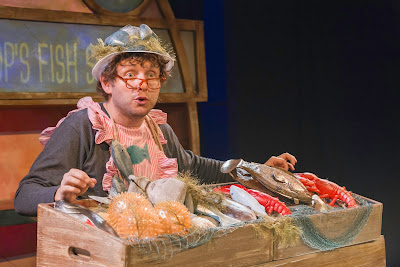 The children loved it and we were also privileged to attend a performance alongside Rebecca Cobb, who was clearly visibly moved to see the production for the first time. We asked her afterwards how it felt so see her work translated across to the theatre: 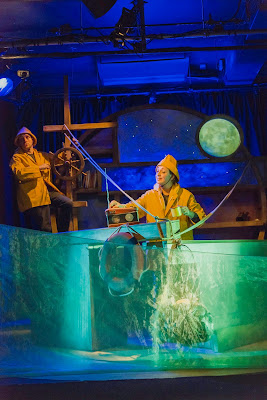 "It usually takes me about 6 months to illustrate a picture book and during this time I get very close to a story and feel very attached to the characters I am drawing. When I heard that The Everywhere Bear was going to be adapted for the theatre I was so excited but also nervous because I was worried about how I would feel when I watched the performance and I wasn’t sure if I would be happy with the way my drawings had been interpreted. But I really didn’t need to worry because as soon as I saw the puppets and the set I was overwhelmed with how brilliantly they had been created. I found it quite emotional to see all the work that had gone into transforming something that I had drawn on paper into 3D characters on a stage. The whole show was completely amazing and really true to the book and the rest of the audience clearly enjoyed it as much as my family and I did." 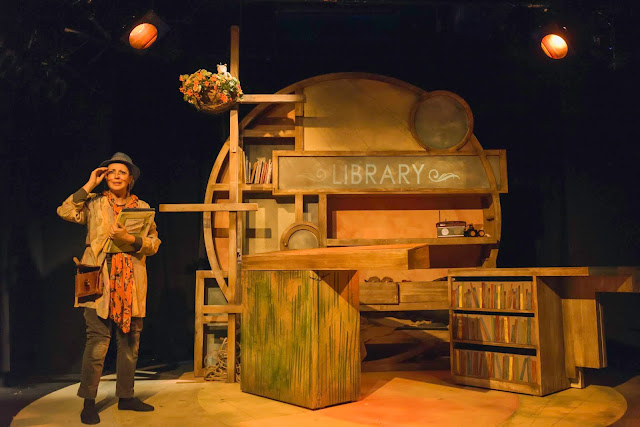 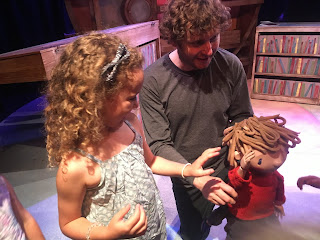 The Everywhere Bear is on at the fantastic children's theatre, The Polka Theatre in Wimbledon, until 26th August. You can book tickets here.

Following the Polka, the show will tour to:

Disclaimer: We were invited to a press performance with a view to a review. As always all opinions are very much our own. With thanks to Amy Bramman at Kate Morley PR for arranging tickets and for press photographs, the Polka theatre for hosting us and Rebecca Cobb for sharing her thoughts.
Posted by MuseumMummy at 22:30 1 comment: