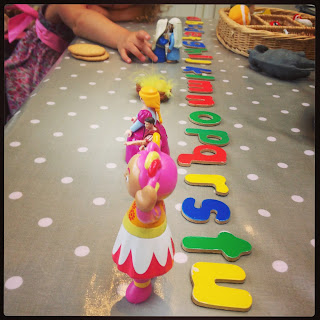 From around 3 Culturebaby became really interested in letters and we began to learn to read simple words. At just four she has plunged headfirst into her sensitive period for writing (currently any time she can get hold of a pen and paper... or cloudy bus window) and numbers. She wants to count everything and, rather surprisingly, chose maths worksheets over bedtime stories last night. Over the last year, I've developed a few resources to help bring the alphabet alive, and I've recently started to add some number games. I thought I'd share five simple to produce ones here. 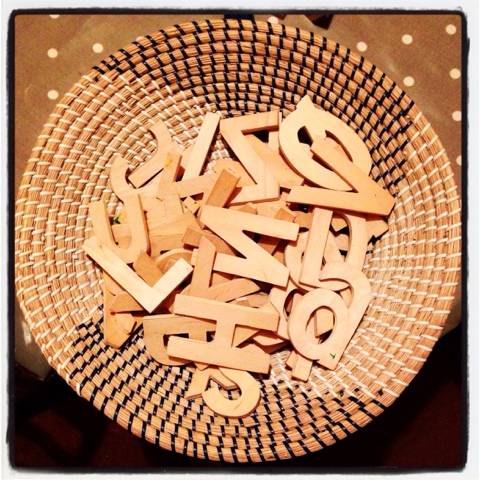 We have a retro set of wooden Galt letter stencils and these serve as a versatile 'movable alphabet'. Montessori schools often use sandpaper letters for their sensory/tactile qualities, but I find the slightly rough wood does a similar job. We have lower and upper case (with the exception of a h lost somewhere in the 1980s... I've replaced...) and with many thanks to our wonderful Suzuki violin lessons where Culturebaby was encouraged to line up A - G and then play a game to work out which had been swapped whilst her back was turned, this became a game she has asked to play again and again. It has helped her to not only recognise A - G in upper and lower case and reorder in any scenario, but we've also used it to build up the rest of the alphabet. She likes to spot when letters within a case have been reordered and to spot mixed up cases. Culturebaby also enjoys trying to fill a basket with the letters she can identify. I must confess, this fascination with such simple games was a complete surprise, but we've run with it... 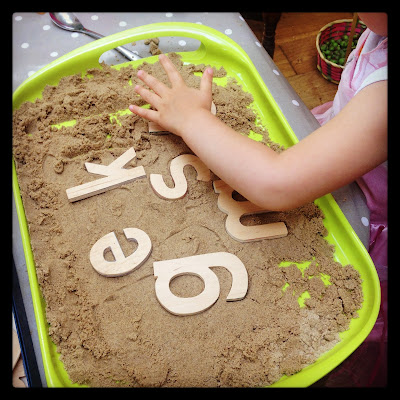 This is such a simple one. Take a tray of sand or salt, give the child a letter, and encourage them to practice drawing it into the sand. I've seen this also written about very successfully with washable markers or flat marbles on a non-breakable mirror. This photograph is the aftermath of one of these trays, when Culturebaby decided to try imprinting some of the letters to create patterns. 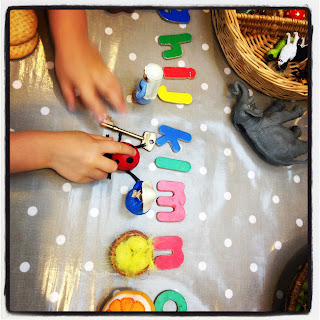 This basket was fun to make. I gathered a set of Melissa and Doug coloured lower case letters and matched each one to a well known item - making sure I used easily recognisable things or small models and added these all to a basket. I used a basket divided into five to make the game simpler so that each set of letters could be worked out separately if desired.

I first created this when Culturebaby was around three and it served as an enjoyable game we could do together. Now I've just got it back out and suspect she will be able to do most of it alone. 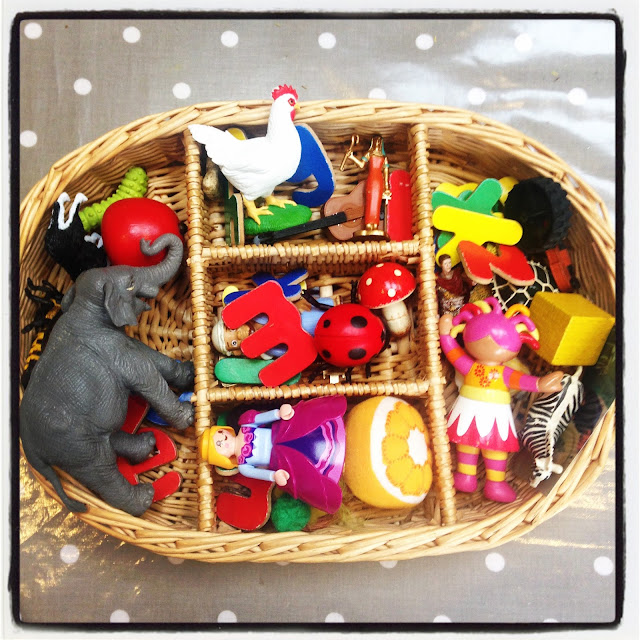 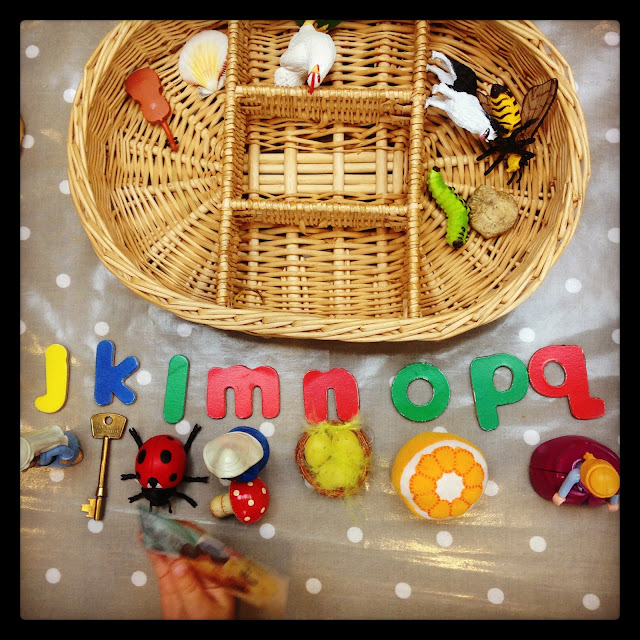 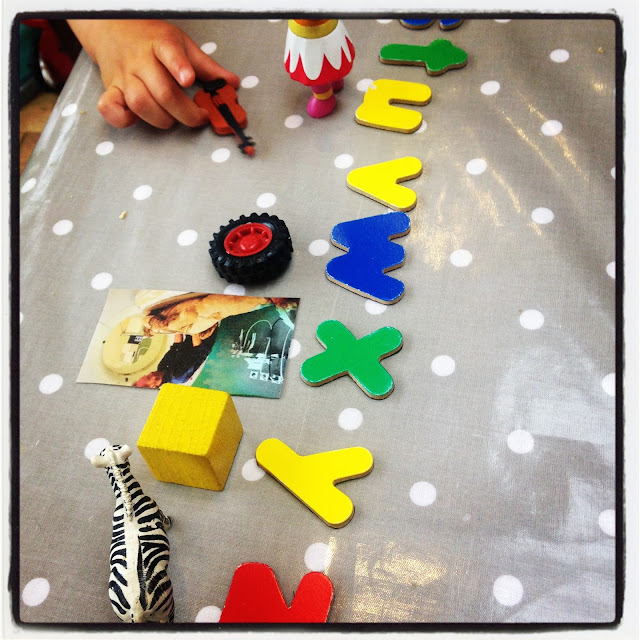 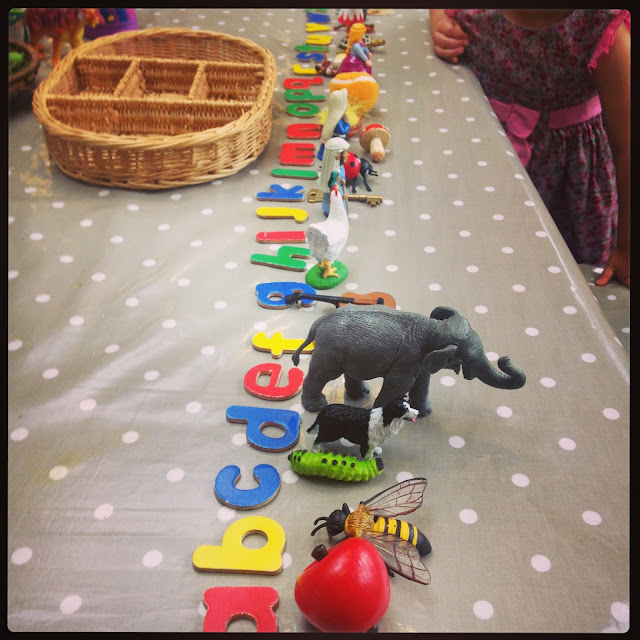 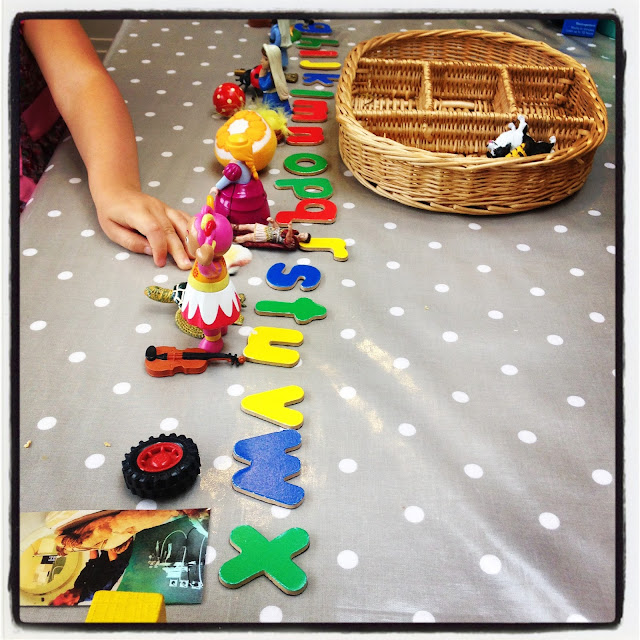 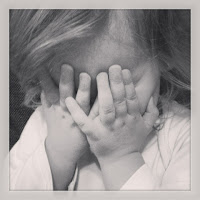 4. Number Sequence Games - Given the success of the letter sequencing and reorganisation games we have applied the same principle to numbers. During the house move I uncovered a brilliant Galt puzzle from the 1970s where numbers 0 - 9 are each created from the number of components that their numeral represents. Both girls love this jigsaw and work on it together. Culturetot gets as excited as Culturebaby at the prospect of hiding whilst the numbers are rearranged. Any set of movable numerals will do for the second part of this activity. 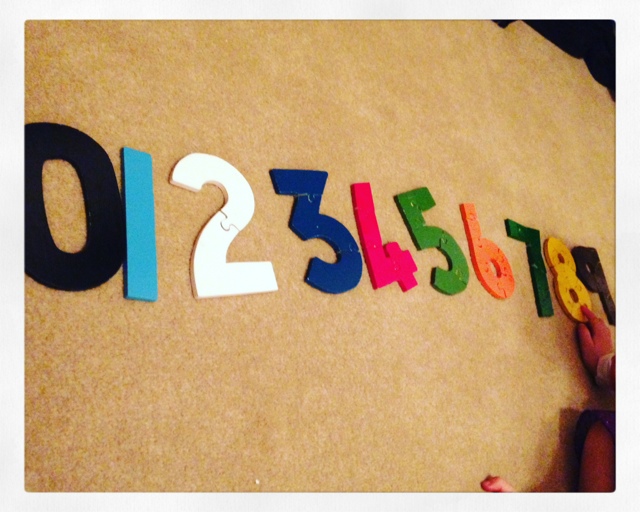 I'm always on the look out for interesting sets of mini identical items that can serve as counters and was pleased to see that Christmas is the great provider. I've created a counting and addition basket from a set of 24 advent pegs and a selection of 24 miniature mushrooms and a set of tiny bells. Culturebaby can either simply play a game of counting the correct numbers of items into the central box as indicated by a changing number clip. Or we will work together to add one number of mushrooms to another number of bells and find the clip together with the corresponding total. I find that working together on tactile and sorting games such as this helps her to remember what she is learning and she goes on to use the materials to sort and play as much as she likes. 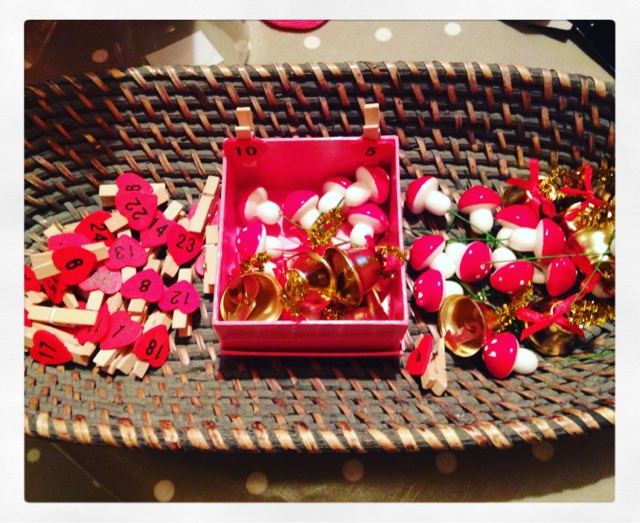 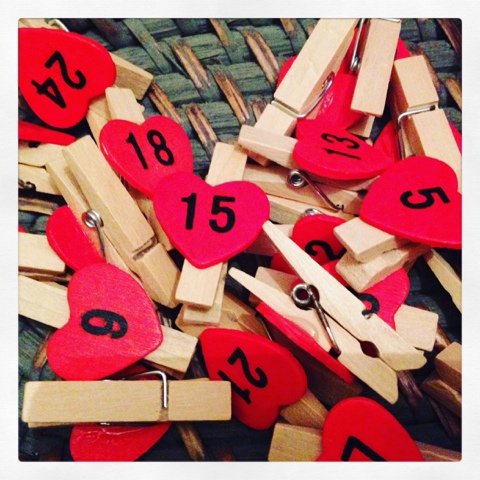 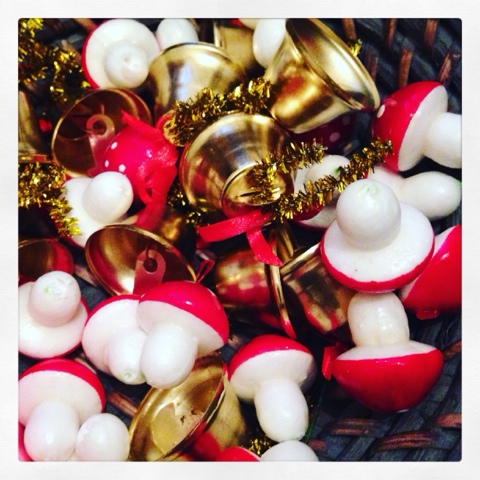 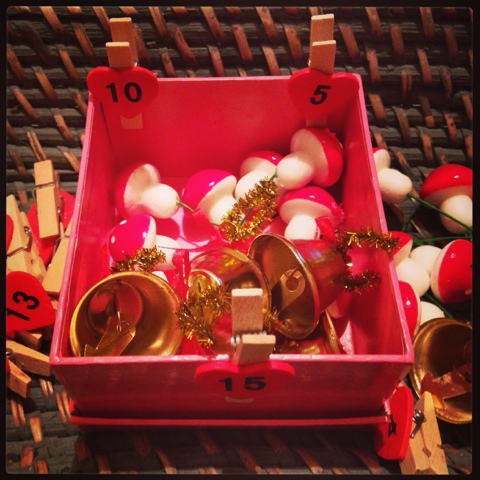