It doesn't happen every day, that a Tiger comes around to play... 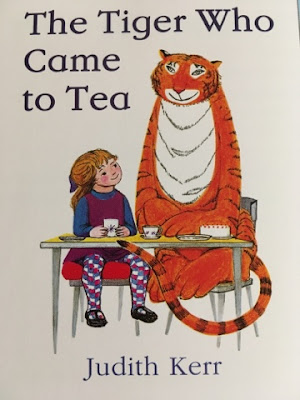 It doesn't happen every day that a Tiger comes around to play...

Sometimes it is the longeivity of a memory, months and months on, that points to the success of a childhood experience. As we ambled past the poster outside Richmond Theatre for the 2017 tour, the girls started to sing the theme and to talk about their memories of visiting Cadogan Hall last summer to watch the performance - requesting to book again this year. 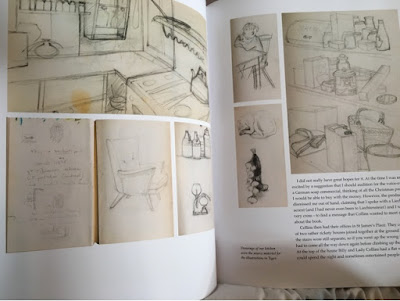 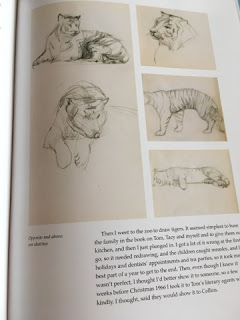 We have seen so much wonderful theatre over the last few years, but there is little better than seeing much loved characters come alive on stage. Judith Kerr's 50 year old classic seems to hold an enduring fascination for children, with a formula and illustrative style so successful, that I can imagine few children would fail to recount the tale.

Its genesis is equally interesting. Judith used to enjoy trips to the library with her young daughter Tacy, but reported her ongoing disppointment that there was very little for children between "here is a horse" and long and dull stories with unfamiliar words (happily due to the legacy of these intrepid early picture book pioneers this problem no longer exists). Kerr noted that it seemed extraordinary that there were so few books with proper stories in simple words that a two year old could understand.

Keeping themselves occupied with trips to the zoo whilst her husband was away filming, and meanwhile hoping for visitors and "that something would happen", between mother and daughter the story of a Tiger who came calling at the house was born. It was Tacy's favourite and soon it was retold by heart. Later her son also loved the story, but it wasn't until both children were at school and work was able to resume in earnest that Judith finally started to turn it into a picture book.

On the advice of a friend from Central St Martins (art school) she experimented with inks to give a layering and richness, and she observed and sketched tigers live at the Zoo. She based the book on her own kitchen and on Tom (her husband), Tacy and herself. Following some re-working with the editor (and Tacy being re-christened Sophie) - though it seems Judith won the battle on the Tiger (improbably) drinking all the water in the tap (her son's favourite) - it was published to encouraging reviews in 1968. Little could she have known its consequent impact. 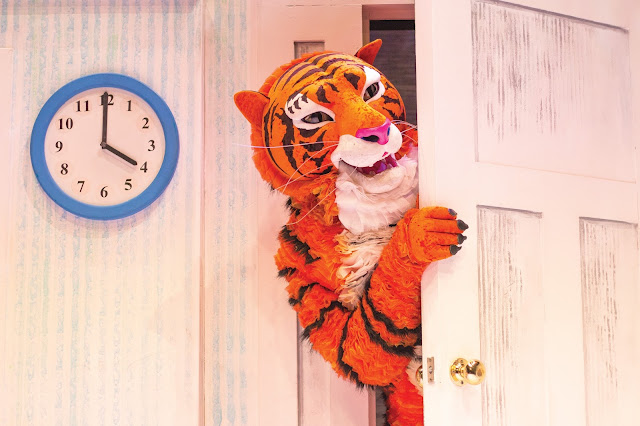 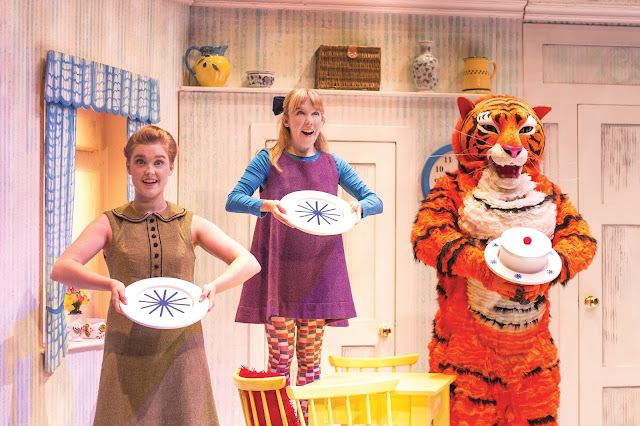 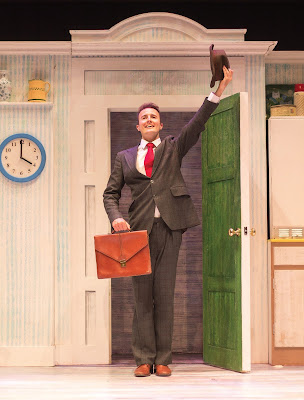 I was perhaps surprised that such a simple tale could be turned into a 55 minute musical but Olivier Award Winner David Wood OBE, a leading writer and director of plays and musicals for children, has done so successfully. With genuinely memorable tunes and humour, the stage show also retains much of the magic of the classic book with its '60s decoration, clothes and routine - and crucially the original story.

In the gorgeous book "Creatures", Kerr's autobiography, she describes the approach from producer Nick Brooke, who wanted to turn the three minute book into a one hour play... "At first I just thought it was ridiculous, but then I thought, why not, and made an appointment to go and see him. He was clearly very professional, and totally serious...." After a further tea and discussion with David Wood, she agreed to give it a go. At a visit to an early rehearsal Kerr notes that she was "brought up short by the set, which looked exactly like the drawing in the book. There were two young actresses playing Sophie and her mother, and a very good young actor called Alan Atkins playing the tiger, the father and three other characters, and the whole thing just felt effortlessly right." It opened to immediate success at the Bloomsbury in 2011 and was later nominated for an Olivier Award. 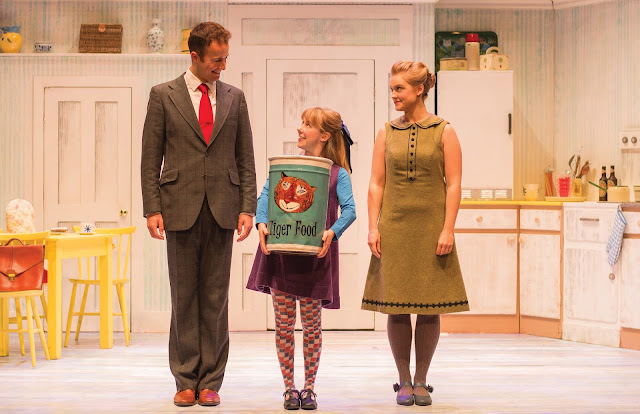 As Kerr herself observes


"It is oddly moving to see a theatre full of three year olds spellbound by this singing and dancing version of a bedtime story I once told my little daughter so many years ago." 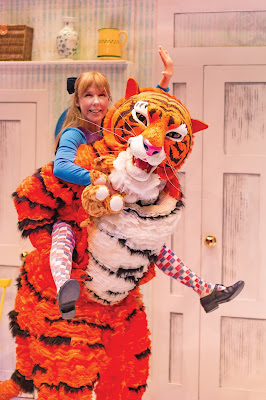 In the words of The Times "It's the Cat's Miaow", as is Kerr, who with her family fleed the rising Nazi party in Germany due to her writer father's liberal, anti-Hitler work. Whilst Tiger is no work of political criticism (though some have argued it is), it has demonstrably endowed many a young mind with a love for the arts and literature. As writer Ann Patchett notes: “Reading fiction not only develops our imagination and creativity, it gives us the skills to be alone. It gives us the ability to feel empathy for people we've never met, living lives we couldn't possibly experience for ourselves, because the book puts us inside the character's skin.” With training such as this for all of our children, 80 years on from Kerr's experience, the forces of bigotry and intolerence would have a far tougher fight ahead.

This year's tour details can be found here:

Dislaimer: We received tickets to the performance in exchange for an honest review. We are very grateful to Cadogan Hall for the opportunity. You can view their fantastic programme of family events here.