A Cock Amongst the Pigeons 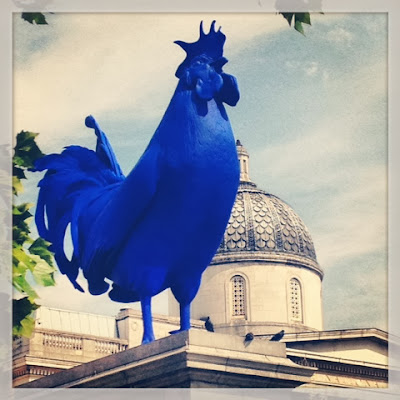 In August, at the beginning of our builder-induced exile, when we had high hopes they were on time and it looked like only a month to go (the gods on Mount Olympus must have been chuckling as they played chess with our fate) we moved to the in-laws in Surrey. It was very hot, I was very pregnant and it seemed like one of the best possible activities was to hang out in cool galleries in London. For the first time Culturebaby and I tagged along with some of her slightly older pals, on a trip to the National Gallery.

Personally, I love the National with its fantastic collection of iconic paintings, but I was interested to see how Culturebaby, a seasoned Tate Modern goer, would react to this much more figurative art and rather more formal atmosphere. 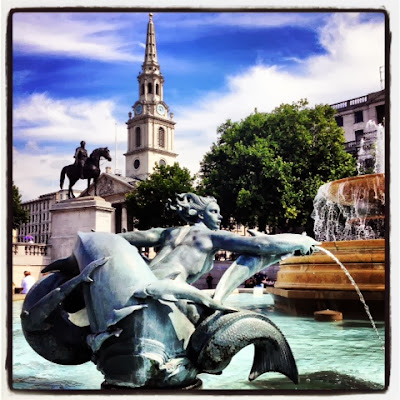 We started with Trafalgar Square, the fountains and fourth plinth. The fourth plinth is a great idea. Situated in the North West corner of the square, and contrasting strongly with the masculine and imperialist imagery elsewhere, the vision was to inject some innovative contemporary artwork into the public realm, and raise debate about the role and nature of contemporary art in our public space. Over the last 7 years this has been rather successful, the most entertaining commission perhaps being Anthony Gormley's One and Other (2009), where for 24 hours a day over 100 days, normal members of the public occupied the plinth. The current resident, unveiled to much debate and instagraming in July, is a giant bright aquamarine Hahn/Cock by Katharina Fritsch. As The Telegraph notes in its review "Fritsch is a feminist whose intention with this sculpture, which stands 50ft away from Nelson atop his phallic column, is to mock male posturing – “She said it’s all to do with a woman’s rendition of a man, or something like that,” reported Boris. So she probably wants us to find it daft." All genuinely interesting for mummies. However, for a toddler who is rather into identifying animals at present, this was just taken at face value as a marvellous London-bus sized bright blue rooster. Culturebaby loved it and spent a while pointing and wandering round the base. And just as in our previous post about Egyptology for little ones (here), again images of animals dominated her attention and stole the show throughout the gallery too. It is fascinating to watch how toddlers are drawn to the familiar, and now with Culturebaby walking and beginning to talk and express preferences, it was wonderful to follow 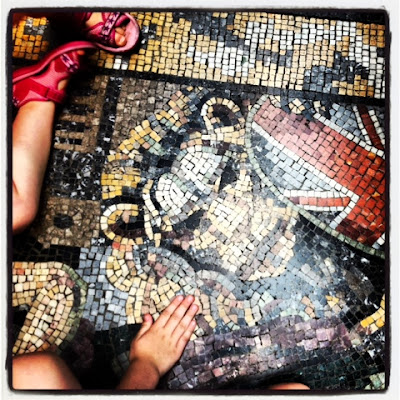 her to particular works to see what caught her eye. A few of her particular favourites were:
And it wasn't only the animal art that attracted her; she and the other children stopped to examine the animals and images in the mosaic floor that I must have tramped over a hundred times without looking at closely enough. (As I've noted before, I LOVE this about toddlers - how their speed and interests make you stop to examine things you may have become blind to over time and get you to appreciate them anew). Culturebaby is also a big fan of vehicles (especially trains) and loved Claude Monet's The Gare St-Lazare and various images of boats. I've also recently seen a really positive and engaging side to the smells, bells and images of our Catholicism, perhaps taken for granted since my own childhood. Culturebaby enjoys looking at the statues, windows and paintings in churches we attend. Because of these, she's on first name terms with baby Jesus and his mum - and she really recognised them in the art, particularly of the Sainsbury Wing (oldest items in the Gallery). 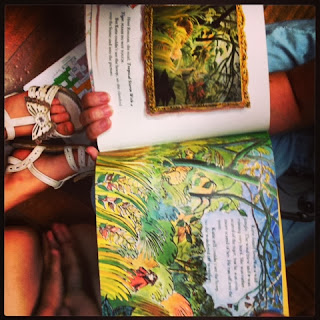 A highlight of the trip for everyone, however, was definitely when, in front of Rousseau's wonderful painting Surprised! my supermummy friend (who comes up with inspiring educational ideas that I'd fail to think of myself) settled down on the floor with our tribe of children and read Katie's Picture Show by James Mayhew. The title is the first in a brilliant series of illustrated children's books about a girl who explores famous paintings by climbing inside them. Culturebaby is still a little young to fully appreciate these inspired books, but as she looked at the images and gazed at the picture above, she pointed and flicked back through the illustrations again and again, clearly very excited that the picture in the story she was listening to was there in the flesh in front of her. The impromptu storytime gathered rather a rabble of other young gallery goers in addition to our own who also enjoyed this experience of bringing the painting to life. We then went on to search out some of the other works which featured in the book, and it was only afterwards we discovered that the Gallery has also used the books for inspiration and has a Katie trail available for children and downloadable resources you can get in advance of your trip. What an excellent idea. 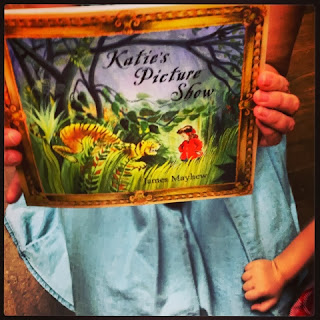 I've heard mixed reviews from parents about their experience of the National Gallery with young children, and likewise our experience had its high and lows. It looks like they are increasingly making a real effort to produce age appropriate events and trails, and with spray-painting art terrorists around I can see why the staff are very vigilant, but we did find that rather than acting as interpreters or behaving in a welcoming manner the room attendants were more like police than anything else. As I and others have pointed out before, toddlers often need to understand and orient themselves in space before they engage with its contents... and yes this may mean some darting around. The gallery wasn't very busy when we first went in, but we were still watched with suspicion and told to keep away from the tempting toddler-height barriers (practically impossible). For the majority of paintings, it is quite clear that a child couldn't anywhere near reach, let alone damage the art. I originally became a lover of art as a result of a collection of prints and art books my mum introduced to me as a baby, as well as regular trips to Manchester's fabulous galleries. We had a picture of the week and a set of postcards I continually sorted through. Many of these were from the National and other such galleries, and I still find it is these iconic images of my childhood that I am most drawn to when I visit the gallery now. Allowing young children to experience and enjoy the space, and recognise the art they are shown at home, is absolutely crucial and I really hope that the gallery will continue to remind itself that, if not for early education first of all, who is this art ultimately for? 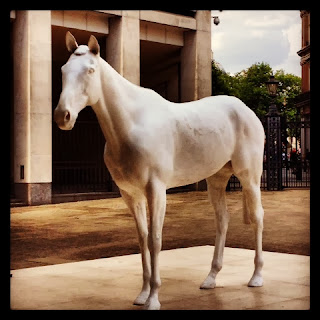 As our gallery trip coincided with a fabulously sunny day, we continued our animal theme as we wandered past Wallinger's White Horse outside the British Council, and across St James's Park on our way to the train. I've walked past it so many times, but was delighted to discover that the little children's sandpit to the Buckingham Palace end that is visible from the path, is in fact a rather wonderful little playground. It was clean and seemingly safe (only adults with children can enter), and has a great selection of equipment, including a giant sandpit. This was a really useful find and an ideal place to stop to let little ones run off steam. It even has toilets just for children. 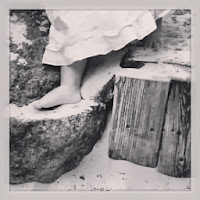 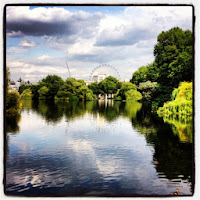 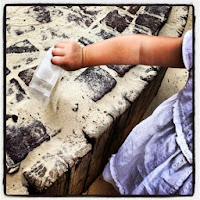 This trip to the National really made me think about some of the best and most appropriate resources I've come across for toddlers of Culturebaby's age and I thought I'd share some here. First of all I mentioned that my mother collected postcards of the art she or I most liked and we used these at home to discuss and browse through. I have started to do this myself and plan to be much more organised about using them in the coming months. I've noticed that Culturebaby both loves and treats very differently her selection of flash cards than she does books. She seems to like the size of them and the independence they afford her - she can flick through them, sort and line them up, select her favourites and I've recently observed her going through a pack and naming certain elements. Postcards can of course be used in the same way. If you also wanted to buy a ready made art card pack to start your collection we'd recommend Usborne's Famous Paintings Art Cards produced in association with the National Gallery. They have useful facts for parents and Culturebaby has used them from a young age.

Secondly, as I say, my mum used to have a picture of the week propped up at our dinner table. This was a great idea I fully intend to start as soon as the builders and their barrels of dust leave the building... We talked about the art as we ate and, as I distinctly remember many of these images now, it must have really worked. You can buy packs of posters and images of paintings, but I also find that cut up calendars and some of the big adult art books you can buy from Taschen, Phaidon and others do the job very well. You just need pages that are occupied by one whole image to make this most effective.

I also wanted to point you in the direction of a brilliant blog series created by Red Ted Art called Kids Get Arty. Every couple of months they research a particular artist and use this as inspiration for a crafty project. They also provide a link to a range of other bloggers' projects along the same lines. It is a mine of wonderful and inspiring ideas and I can't wait to start some of these projects with Culturebaby in the coming months.

Finally, of course, there are many great introductory art books that are perfect for Culturebaby's age - far too many to mention here - and we'll cover a number of these in various future themed posts. Our next, to follow very shortly, will explore this animal magnetism for little gallery goers...
Posted by MuseumMummy at 21:32