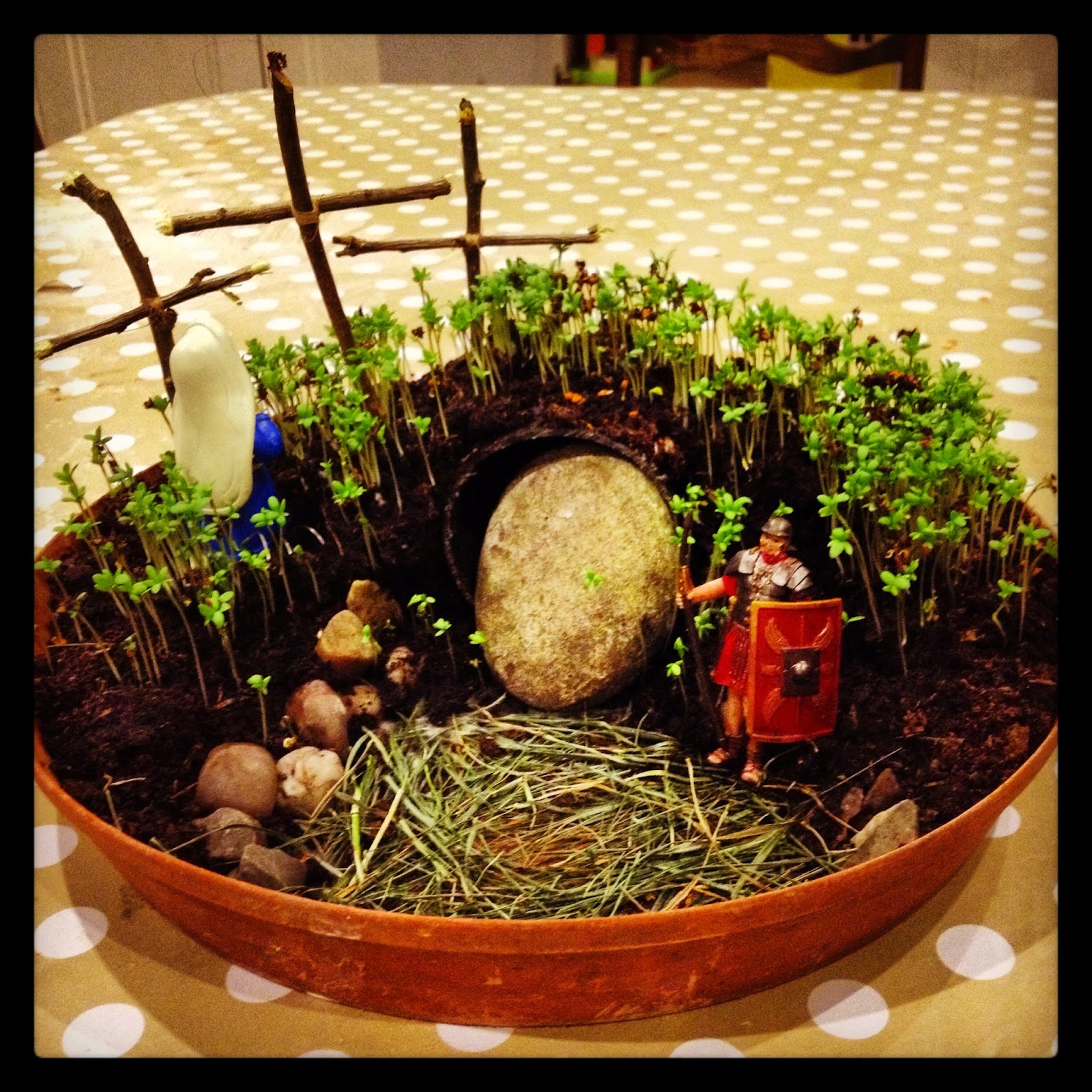 Last year was the first Lent that I really had to think about how best to explain the story of Easter to Culturebaby. It's a tricky one. Given that we adults struggle to fathom the mystery of salvation, I'm not sure a two year old can be expected to either. Furthermore, Culturebaby is an innocent. The sight of Pooh Bear, Piglet and pals lined up on the naughty step just makes me love my little lady more, particularly when she explains that Pooh scratched Piglet and he has to do two minutes and there'll be no television for him. Even though we have a naughty step and a marble jar to help Culturebaby take time out when she's being frantic or difficult, and reward spontaneous loveliness, toddlers are ultimately still impulsive in their reactions and they are entirely beautiful and good. It is therefore much more helpful, I believe, to talk to them about kindness and how to treat people, and tell stories about the unconditional love of God - even when we make mistakes. 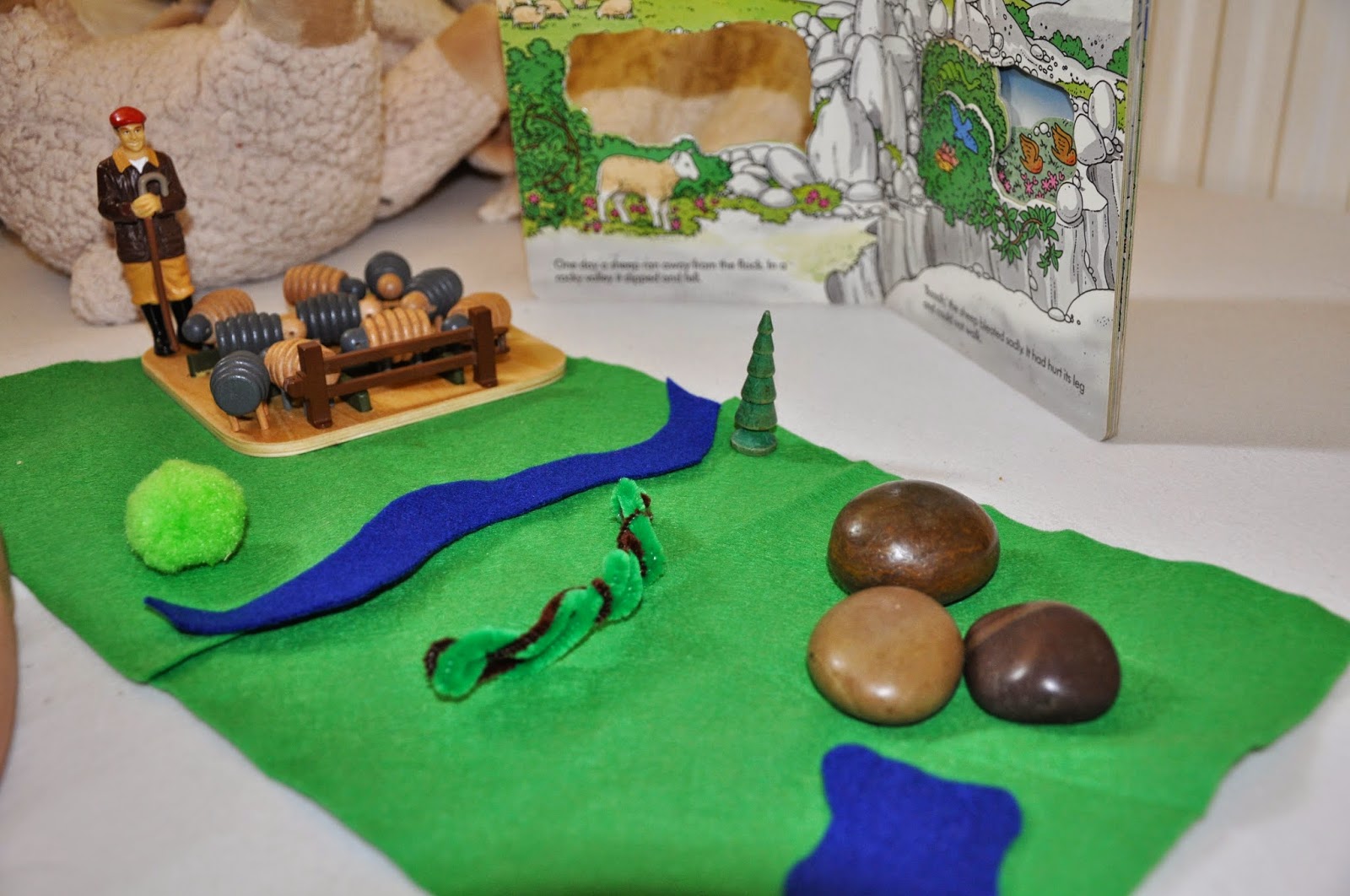 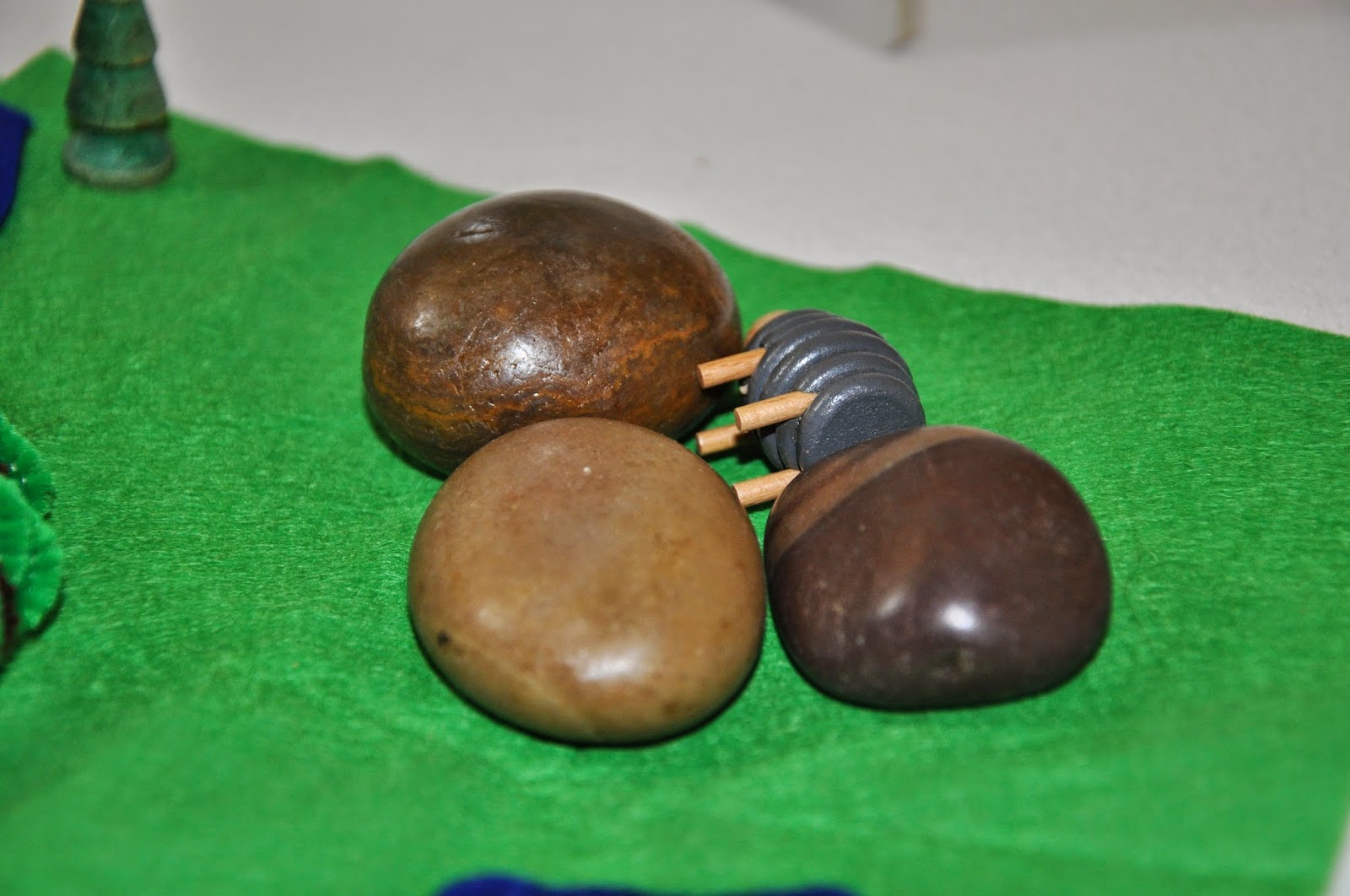 I've found that a rather lovely and accessible way to introduce the crucial ideas around infinite love and care, sacrifice and salvation is the simple parable of The Lost Sheep. Culturebaby loves imaginary play and little models. She also seems to be developing rather a theatrical penchant for acting stories out. With this in mind last year I created a simple play landscape for the lost sheep to venture across on his own, complete with perils for his master to overcome in carrying out his recovery. This was so simple to create just from materials and objects we already owned, and was more successful than I could have imagined. After numerous "again!"s and two versions of the tale with slightly different props, Culturebaby began to recount the story herself. We filmed it and watched it back, and I even overheard her acting it out to her soft toys from the other room as she settled down for a nap. The two excellent versions of the parable we use are the lighthearted version from Stories Jesus Told by Nick Butterworth and Mick Inkpen. This compilation is a current favourite with Culturebaby, who loves the simple moral tales re-told here in accessible form. We also really like the cut-out board book The Lost Sheep, which is slightly closer to the original and equally accessible. 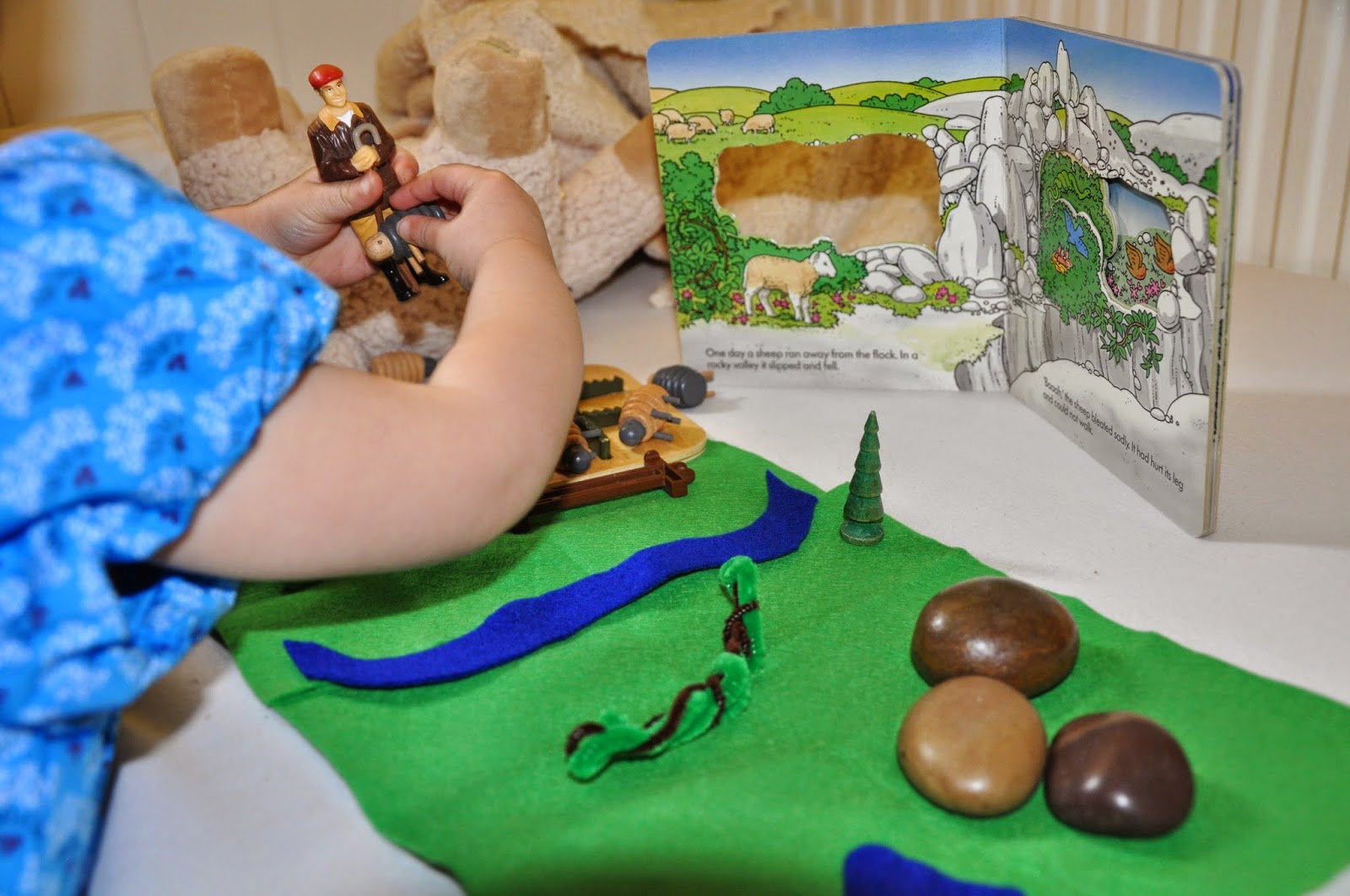 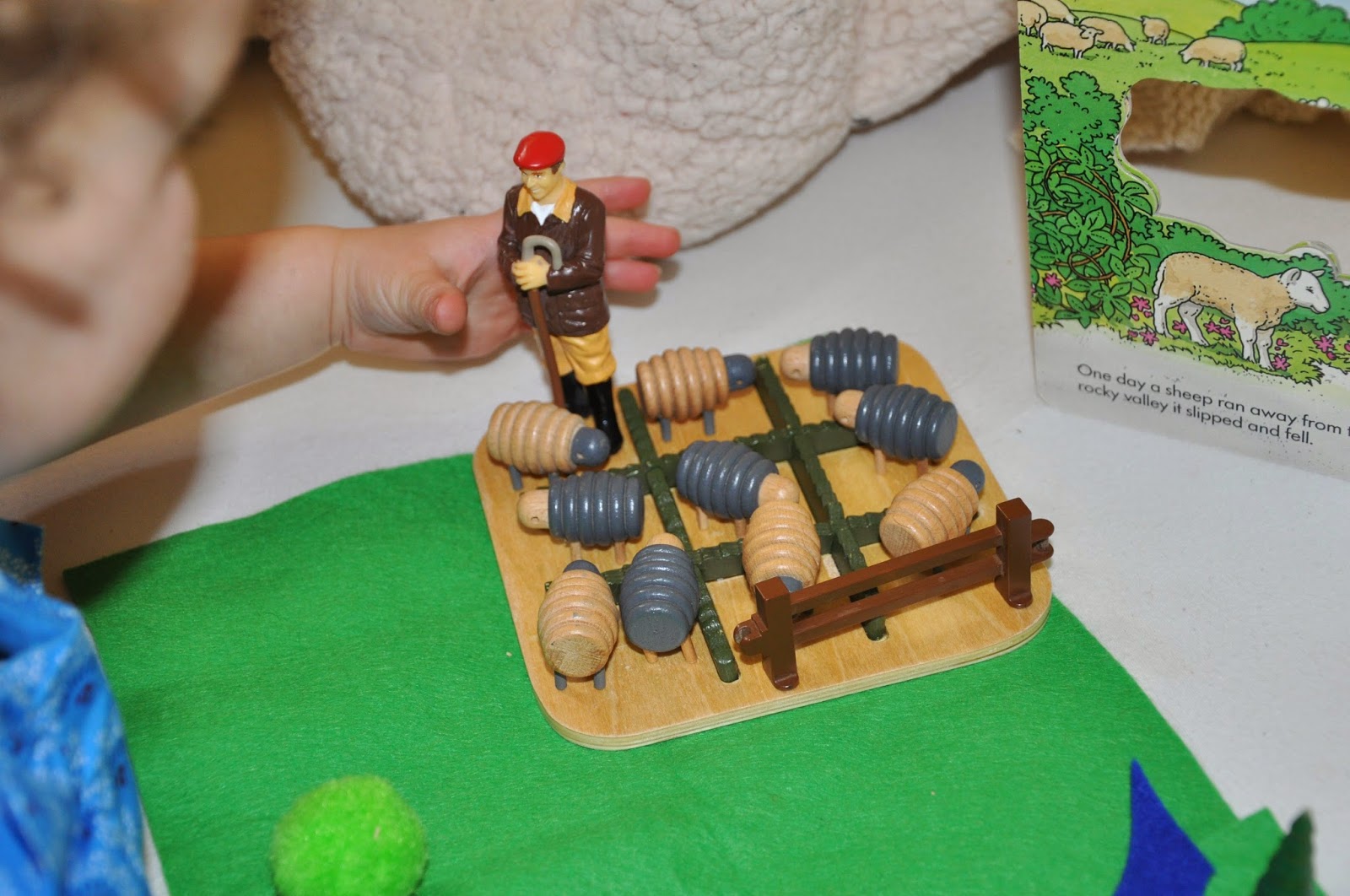 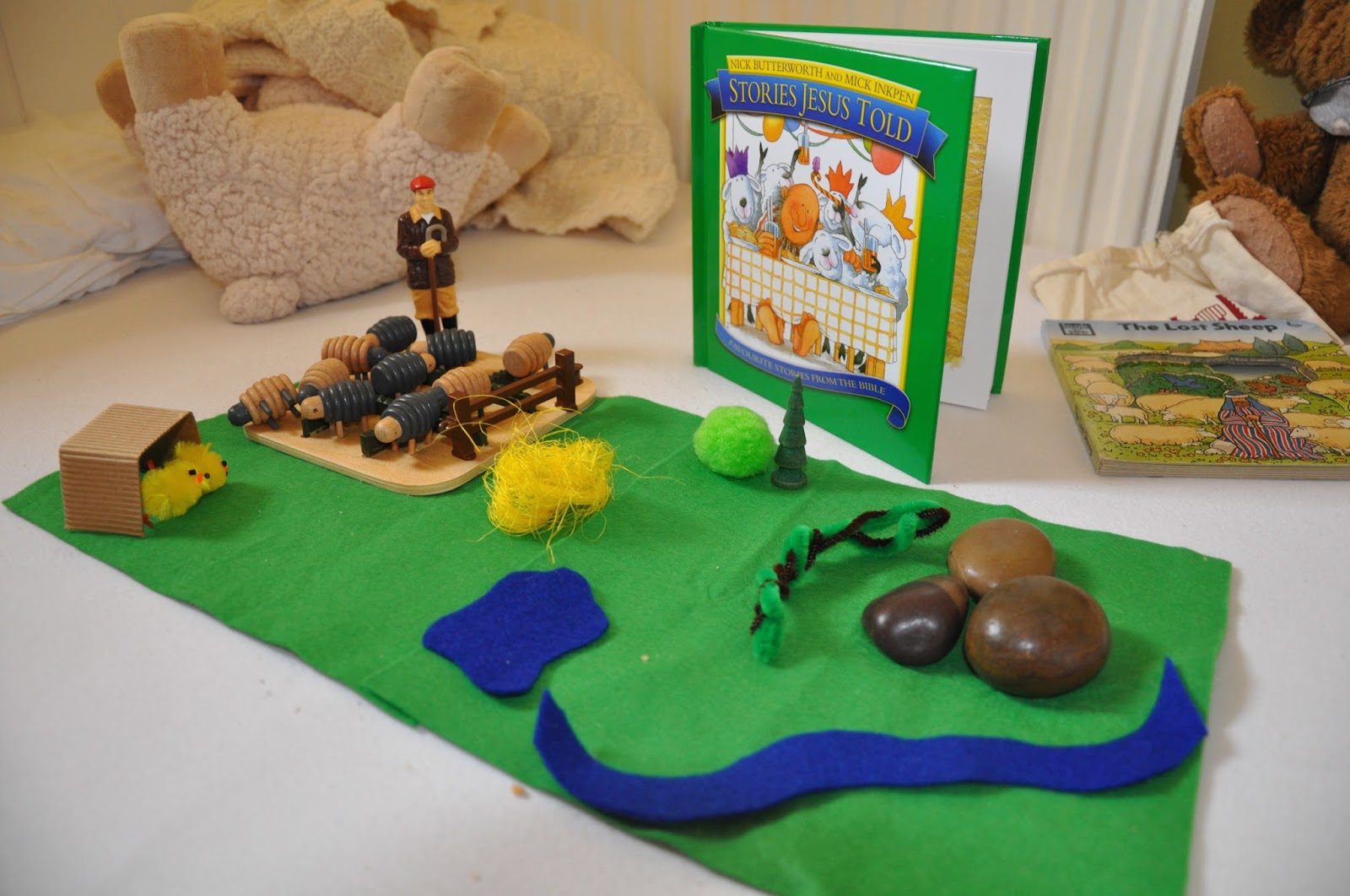 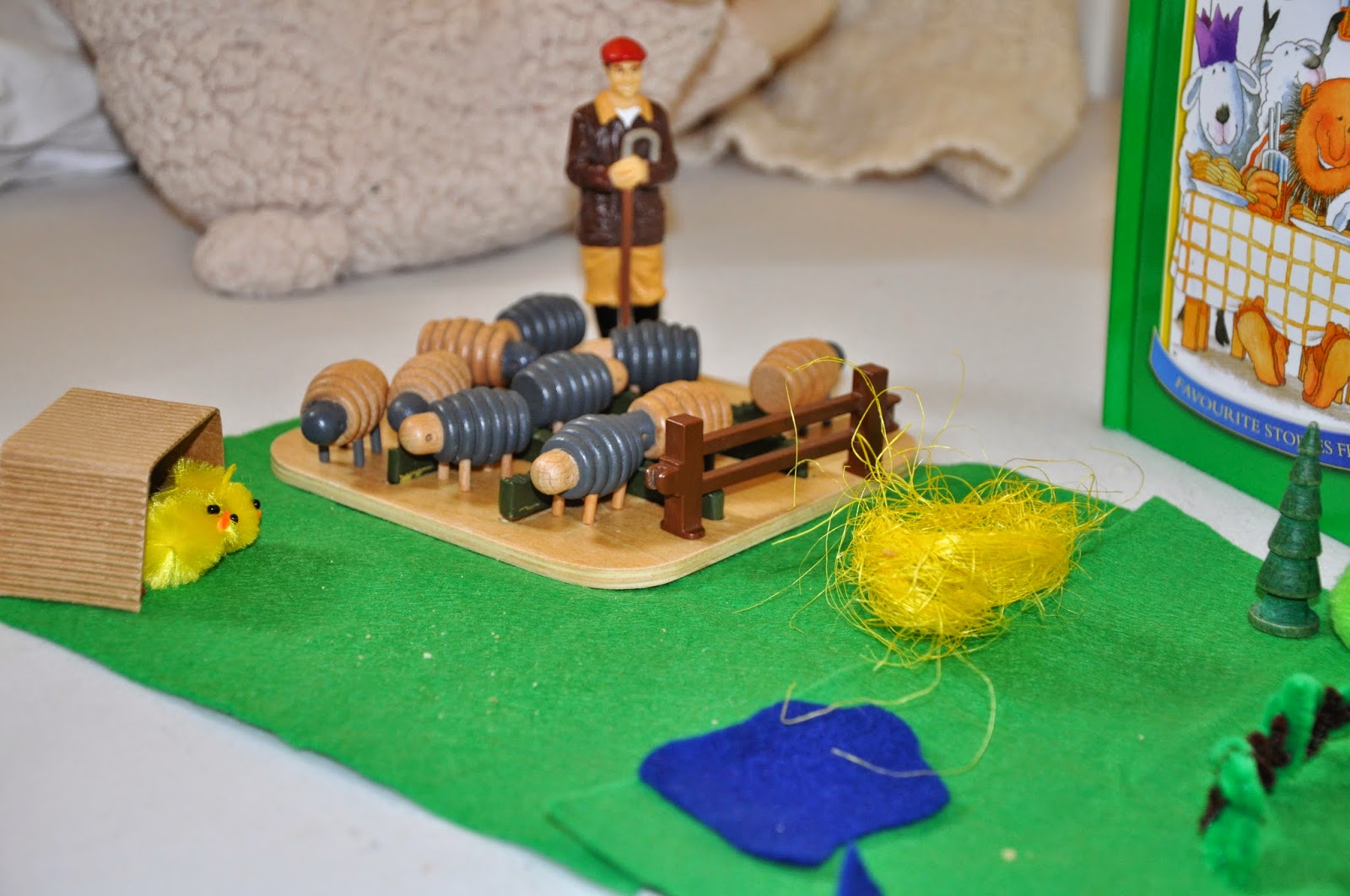 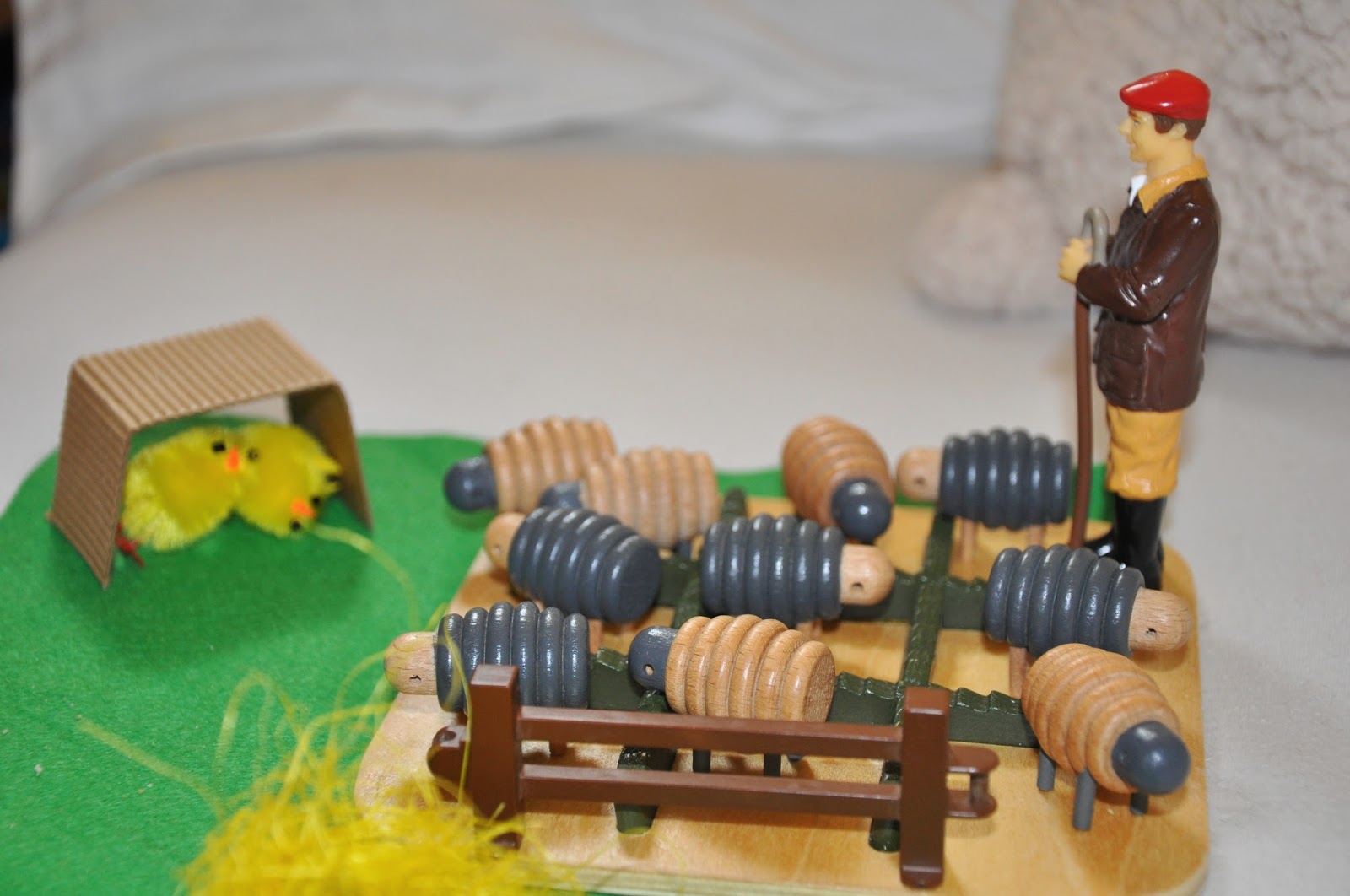 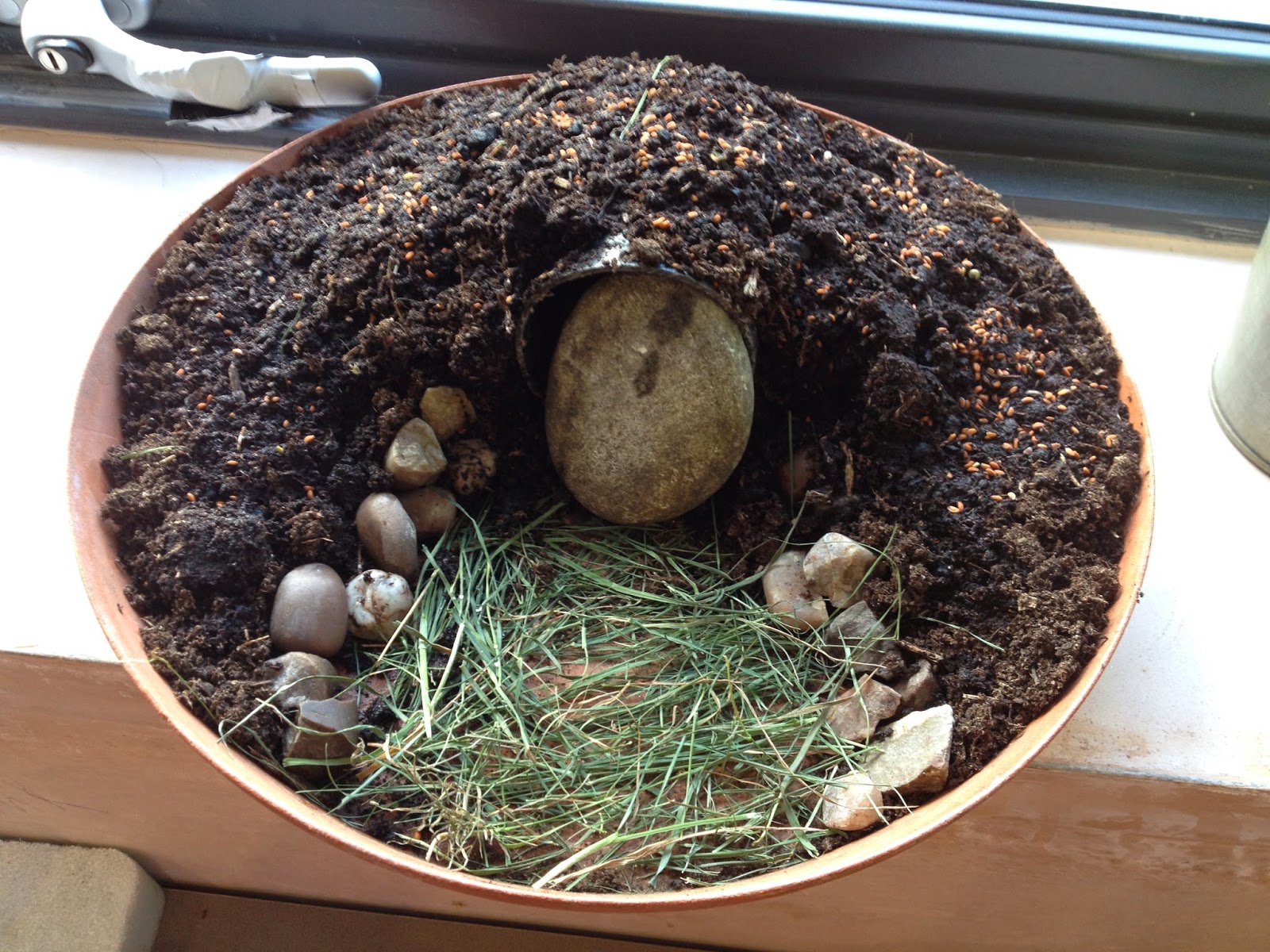 Last year, towards the latter part of Lent, we also created a Resurrection Garden table centrepiece that I'd seen on another blog and loved. The model presents calvary and the tomb; complete with stone blocking the entrance, which can be rolled away to reveal the empty tomb and figurines. This was extremely simple to make and was a helpful way to act out the stages of Holy Week.

Start with a large plant pot base and a smaller ceramic plant pot or piece of pipe turned on its side. Build up earth around the pot into a mound with the top of the plant pot forming a cave-like entrance surrounded by sand or gravel. We created 3 small wooden crosses from branches bound together with thread and placed these on the top of the hill. We then added cress seeds (you can also use grass seed if you have longer) which grew over the course of the week and was a visible symbol of the resurrection. We also added figurines of Mary and a Roman soldier. It was such an effective model that I plan on making it again this year. 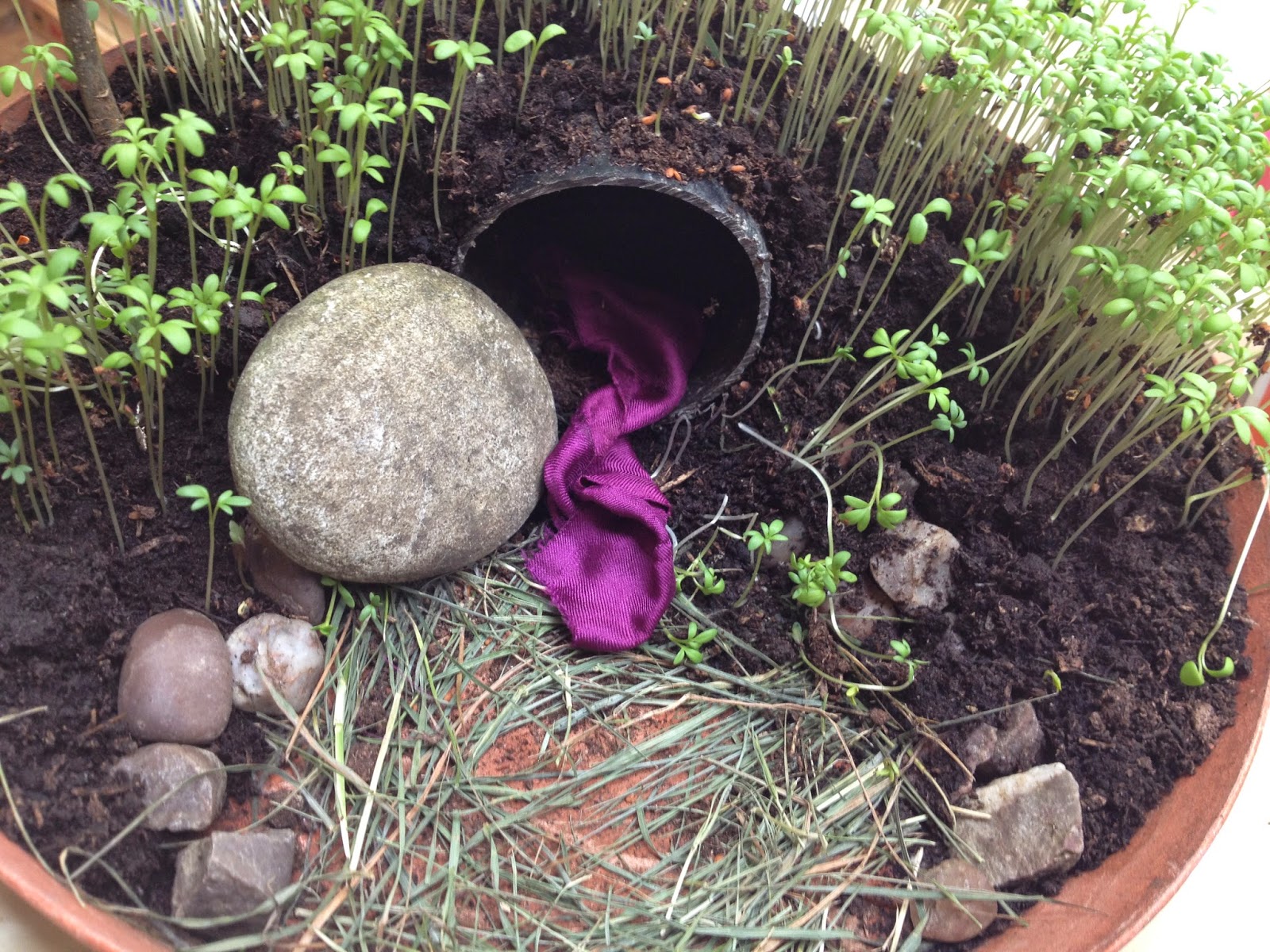 We have found two great books in particular to accompany the Easter story. Firstly Usborne's Book of Bible Stories compilation: this is a perennial fixture in our mass survival bag and has been the primary introduction for Culturebaby to some of the iconic characters from the Bible. She loves the format of these Usborne productions with their simple and engaging images and accessible text. We also received as a gift a gorgeous little Easter Bible Storybook board book featuring photographs of toy models acting out the excitement of Jesus' followers as they discover that he is alive. With the repeated phrase 'Jesus is alive', this one really stuck in Culturebaby's consciousness and she was able to take part in the telling of this story again and again.

Inevitably with children involved, imaginations take over and materials take on a life of their own. Culturebaby decided that as Jesus had vacated his tomb and no longer needed it, he wouldn't mind if she moved a homeless Makka Pakka in. It was indeed strikingly reminiscent of the little chap's Night Garden abode and, given Our Lord's general approach to the needy, I'm absolutely certain he would have had a little chuckle and endorsed the project wholeheartedly.

Disclaimer: A few months ago Usborne sent us their Bible Stories, which has been very well loved. It's a must have for mass bags everywhere... We also received the Roman soldier model from Safari Ltd. Their range of accurate figures have been brilliant for so much of our imaginative play over the last year. We highly recommend them. All other materials are our own. We will write shortly about our other Easter and spring activities - we had a lot of fun last year and failed to write much of it up at the time... 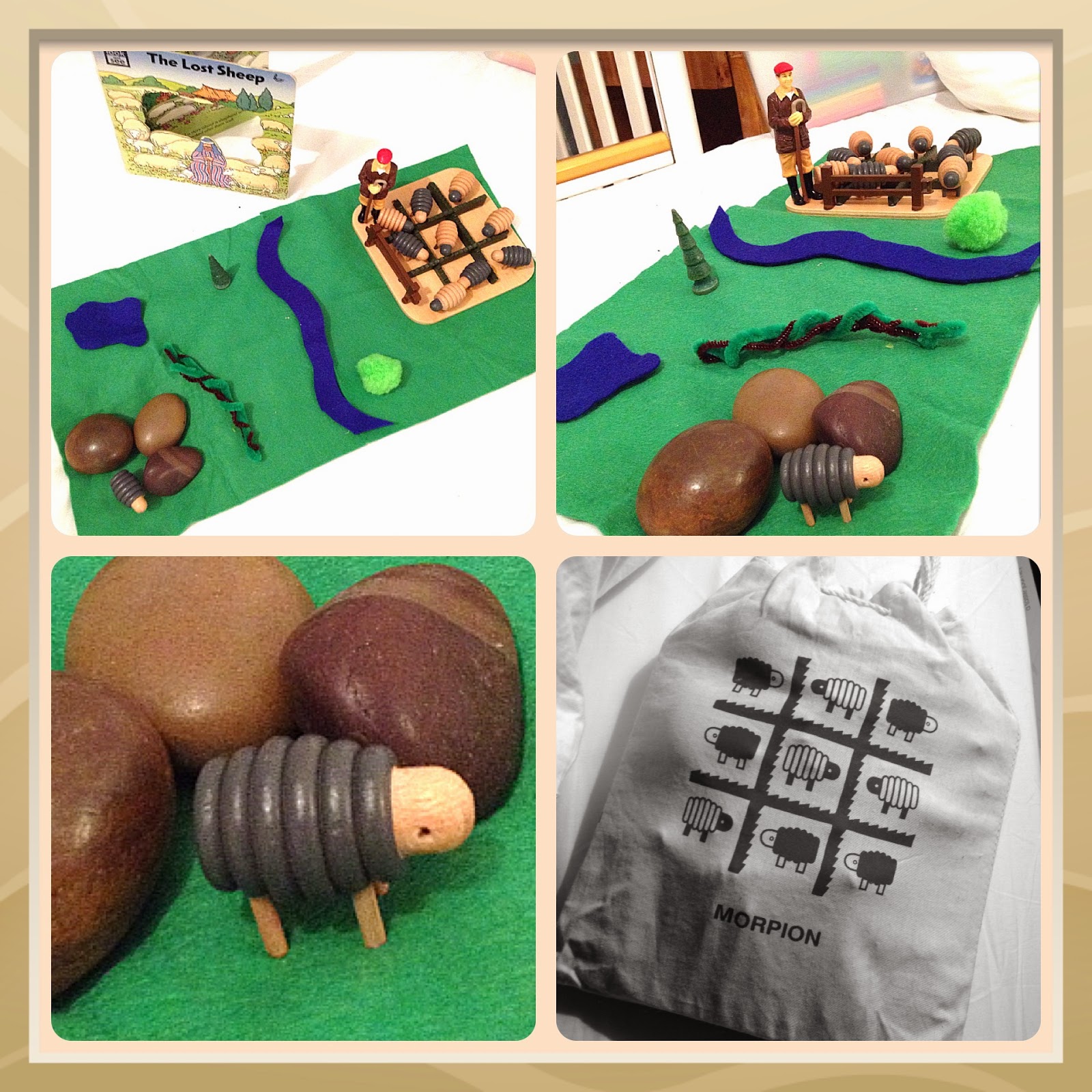