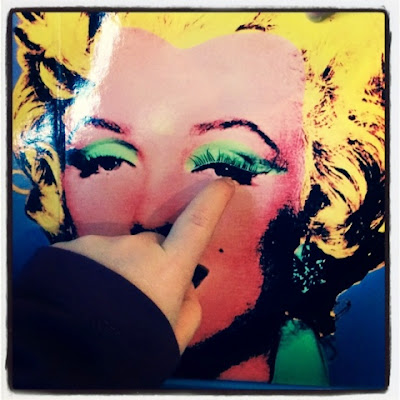 I'm harbouring a mild addiction to free online courses at the moment. I'm an extraverted boffin - much happier in a supportive herd. One such course is a new initiative run by Artist's Rooms and Edinburgh University on Andy Warhol. I've never studied him so I thought it would be a great opportunity, whilst providing some inspiration for projects to share with the Culturebabies. Happily I have a likeminded study buddy and we've been really enjoying creating some joint arty activities for our 6, 3, 2 and 1/2 year old in recent weeks. 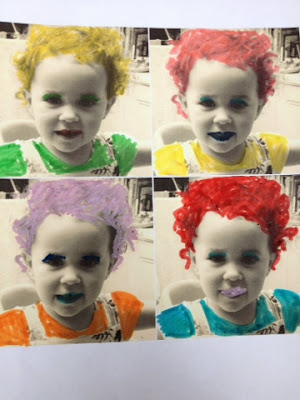 I've discovered that Pop Art is a really accessible movement for little ones to grasp. It is bright and simple, features strong shapes and everyday objects, people and animals, and it uses a variety of media that is easy to emulate or replicate. Pop was short for popular and what better to engage little imaginations than the familiar presented in a new way? One of Culturebaby's first favourite board books was a gorgeous little production as part of a series by Susan Goldman Rubin entitled Andy Warhol's Colours. I have reviewed this before here and regularly recommend it to parents of young babies of Culturetot's age (6 months plus). This book works so well with this age group as it is a great size and feels lovely, it showcases colourful images of that perennial toddler favourite of topics - animals - and has a really good rhyming text to accompany the art.

Last year Culturebaby and I also visited Tate Modern's blockbuster Lichtenstein retrospective which celebrated the king of comicstrip art. She visibly and vocally enjoyed the huge colourful canvasses with their bold lines and dots and, given her age of 18 months when she was deep into the pointing stage and learning words, it was a perfect to way to play I-Spy. She was able to identify vehicles and household furniture and objects such as telephones and food. I came away with a great packet of postcards and a beautiful ABC book, which we will be returning to shortly as she is currently learning her letters. 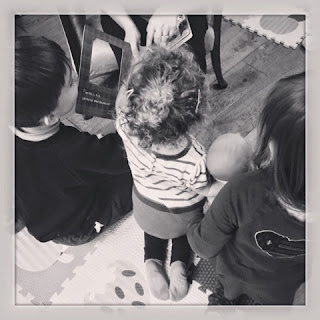 The Warhol Course set us an assignment to create our own work inspired by the artist and after a mild moment of panic, I realised that this would be a great opportunity to make some pop art with Culturebaby. At two and a half, she is very much engaged with creating her own drawings but is still learning to colour-in with increasing precision. She's also never happier than with a pritt-stick or a set of stickers (I'm forever peeling them off furniture, floors, her sister, and regularly find I'm inadvertently sporting a number of the back of my skirt or shoe). After a little while considering the options and scanning the internet where a plethora of creative people regularly and generously post their fabulous ideas, I gathered a few together (you can view a selection on my Pinterest Board here) and we set about creating age appropriate materials. 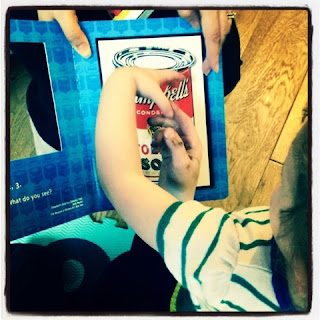 Amongst other things, Warhol liked to see himself as a machine and, as his works were in high demand, he produced prints of his works and invited his friends to his aptly named Manhattan 'Factory' to join him in 'Colouring Parties'. We began our Warholian Colouring party by having a look at some Pop Art for inspiration. We read one of our favourite art books Pop Warhol's Top by Julie Appel and Amy Guglielmo. The text of this book leaves rather a lot to be desired, but the touchy-feely imagery is utterly inspired. All the children loved popping the top of the Campbell's Soup can, fluttering Marilyn's eyelashes, pulling the lettuce out of Oldenburg's Two Cheeseburgers and, best of all, feeling the sticky sauce on Lichtenstein's Mustard on White. 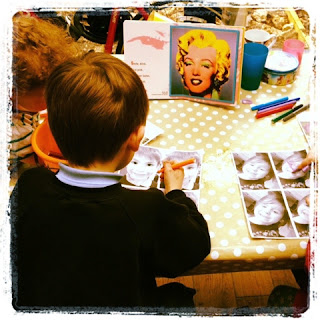 We then propped up the picture of Warhol's Marilyn 1964 and gave them a set of sepia photographs we had created of each of them as a repeated grid of 4 (a style Warhol used a lot). This is really easy to produce using apps such as Instaframe. Following a demonstration they set about industriously customising their own portraits using felt tip pen. The results were wonderful. Since she was a baby I've noticed that Culturebaby has always been interested in looking at photographs of other babies and children, as well as spending time examining images of herself on my camera, so this was a perfect activity for her age. It also ensured that even with simple marks and colours the results looked credible to the children and reminiscent of the simple Marilyn in front of them. 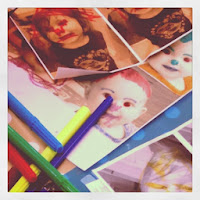 We then presented them with a selection of other Warhol-inspired worksheets to choose from - a set of repeated images of our family cats, multiple images of soup cans that we obtained from this great site, a template of Warhol's Flowers 1964 to complete (from Red Ted Art's fab blog), and (mainly for the six year old) a set of blank tin labels for him to design his own contents and flavours (from here).We also provided blank paper, which the six year old used on his own initiative to create his own artwork with grid structures and patterns. 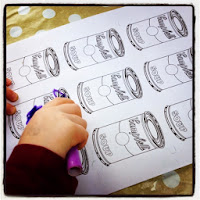 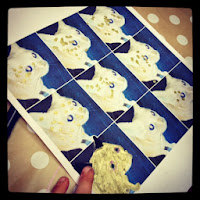 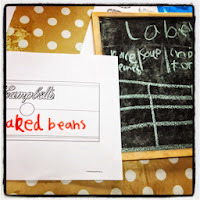 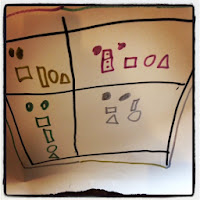 The children moved between the various sheets and a real set of identical tinned tomato cans that we placed on a mat for them to handle, explore and build with. This proved to be an engaging activity. Six year old really enjoyed building with them, creating structures then taking his own digital images using a range of effects on our cameras. He then worked with Culturebaby to create her own structure and photographs. Whilst she at times got frustrated and sucumbed to her innate toddler urge to knock them down at regular intervals, I was delighted to find that she had remembered the experience, as two days later I found her removing all the cans from our cupboard, carrying them carefully to a mat and replicating the experience alone. 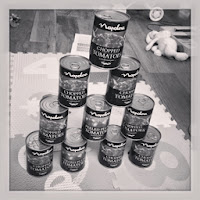 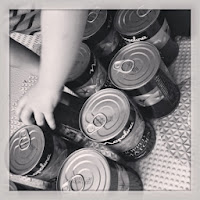 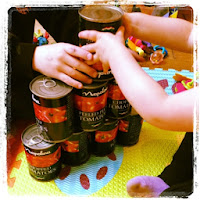 Likewise, I had left a number of the sheets and the pens available on her play table, and a week on, she has still been selecting them unprompted, and working on them with a range of materials. Yesterday, for instance, she used a set of foam stickers to embelish a set of images of herself, and appeared to be practicing drawing lines and colouring facial details on a set which depicted her sister.

Using materials already available and with a limited amount of prior preparation, I couldn't recommend this art appreciation activity more highly. I am absolutely certain that through producing her own art, Culturebaby will in the future be able to recognise and remember a Warhol and hopefully she will feel that she too, and indeed anyone, can also be an artist. 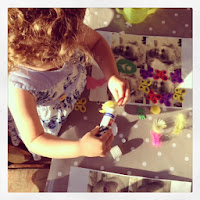 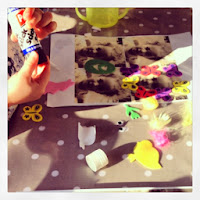 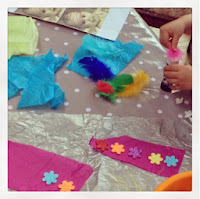 In addition to the two books I recommend above, here are two further recommendations for slightly older children: 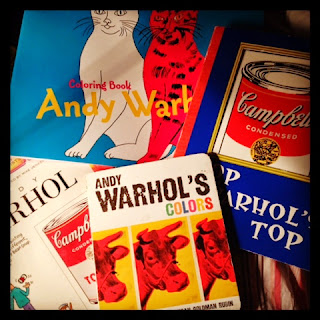 Andy Warhol by Mike Venezia - I have written about this great series 'Getting to Know the World's Greatest Artists' before in my post on Paul Klee for Kids. These brilliant books are both funny and informative. They each summarise an artist's life and inspiration using facts children will be interested in and pepper this with a selection of art and amusing cartoons of imagined events. These could be shared in a meaningful way with a pre- and primary schooler, but they could also be read by literate children over the age of 5 or 6 alone.

I was so impressed with Prestel's Paul Klee colouring book that they kindly sent me their Andy Warhol Colouring Book by Annette Roeder to look at too. Again this is an absolutely brilliant resource to be used in a plethora of ways from toddler age all the way through childhood. Using a selection of Warhol's art the author skillfully selects details of interest to this age group to encourage them to engage with and think deeply about the art and how it was produced, whilst learning about the artist and his techniques and creating their own images. Readers are invited to try dance steps, illustrate shoes, select colours and complete paintings, paint by numbers in the style of Warhol, host their own colouring party, customise photographs of themselves, create comics, draw pets and make ink blot art. These books are an educator or homeschooler's dream... We'll use this for years.

Here are twelve great facts about Andy Warhol that your children may find interesting, and some questions or activities to use with them: 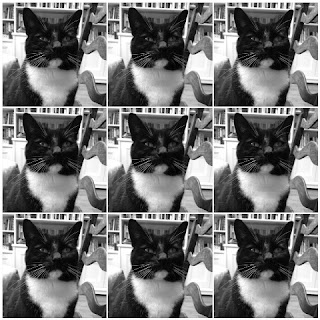 Disclaimer: Prestel sent us their Andy Warhol Colouring Book for review purposes. All other books are our own. We have linked to sources of ideas where we used worksheets others have created.