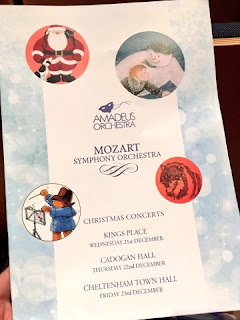 One of the most memorable and emotive of our Christmas activities each year has been attending the Amadeus Orchestra and Mozart Symphony Orchestra's Christmas concerts. Two years ago (here) we wrote about the brilliant Mozart Symphony Orchestra's Peter and the Wolf and the Snowman double bill at Cadogan Hall. This year (following an astounding diary fail last year where we turned up to the concert a day late) the Culturebabies arrived at King's Place for a repeat performance with the Amadeus Orchestra and two full year's worth of anticipation. It was worth waiting for - a double whammy of two of their most loved orchestral works in one sitting. Excitingly the Amadeus is one of the world's foremost training orchestras for young professionals and music students.

Firstly we were treated to a live performance of the children's classic: Prokofiev's Peter and The Wolf, narrated by Simon Murray and featuring musicians dressed in hats relating to their characters. The conductor was engaging and fun. He gave us facts about the instruments and told us what to look for as we progressed throughout the piece. Each instrument gave us a short demonstration. This brilliant composition is, without a doubt, the best classical piece I've found to introduce to young children without the aid of film. Written in 1936 by Prokofiev for the Moscow Theatre for Children, the work was intended to be, and was commissioned as, a guide to the instruments of the orchestra. Interestingly for us adults, given its genesis in the Stalinist regime, there are a number of political themes underlying the musical tale and it narrowly escaped state censorship (see here for an interesting article) but for adult and child alike it can also be enjoyed at face value as a brilliant musical exploration of the orchestra. 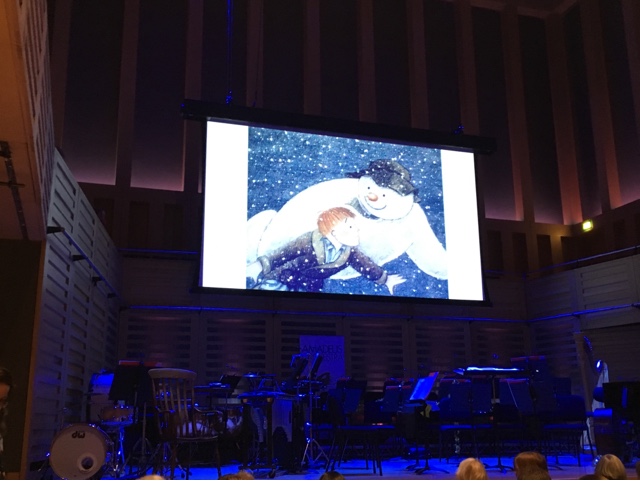 Following the interval, the concert hall was transformed into a cinema and we were presented with the full film of the Snowman in cinematic scale, but with the original soundtrack removed. Instead we were accompanied by a live orchestra and the 13 year old Choirboy Sebastian Till performing the classic Walking in the Air. As I wrote recently, a Christmas viewing of the Snowman is like a rite of passage, a ritual through which the joy of childhood is kept alive. Fully versed and note-perfect, surrounded by family and strangers alike, we re-enter annually this intimate tale of belief, living life to the full and dealing with loss. Nothing says 4 sleeps to Christmas like a viewing of the Snowman and as far as cinematic experiences for children go, this was pretty impossible to beat.

This fantastic series of Christmas concerts varies each year a little but retains many of its most magical components. They've since added an out of London concert in Cheltenham too. Last year, Culturebaby (then just 4) and I headed over to the first in the series: Paddington Bear's First Concert at Cadogan Hall. This was varied, funny and entertaining with narrators as distinguished as Simon Callow and Richard E. Grant.

It began with a welcome surprise, a startlingly moving arrangement for a Symphony Orchestra of the main themes from Frozen. Frankly if most parents of little women knew this, the tickets would have sold out in record time for this element alone. We then moved on to the main billing, a narrated musical story (first performed in 1986) of the lovable Paddington Bear; charting his journey from Peru to Portobello Road to an eventual (and unscheduled appearance) in one of London's finest concert halls. Finally we squirmed our way through Roald Dahl's quirky and characteristically macabre Revolting Rhymes version of Jack and the Beanstalk set to music. Whilst this day of the programme was less traditionally Christmassy than the classic double billing, it was musically accomplished and enormous fun - and I see that this year they combined Frozen and Paddington with Briggs' Father Christmas. 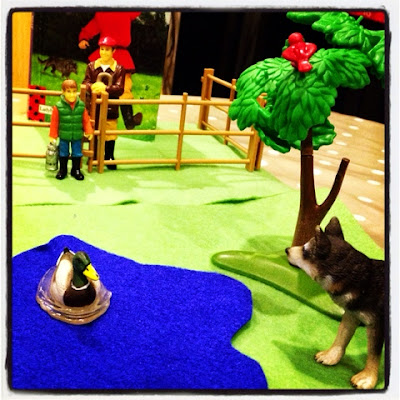 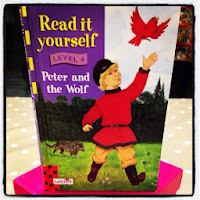 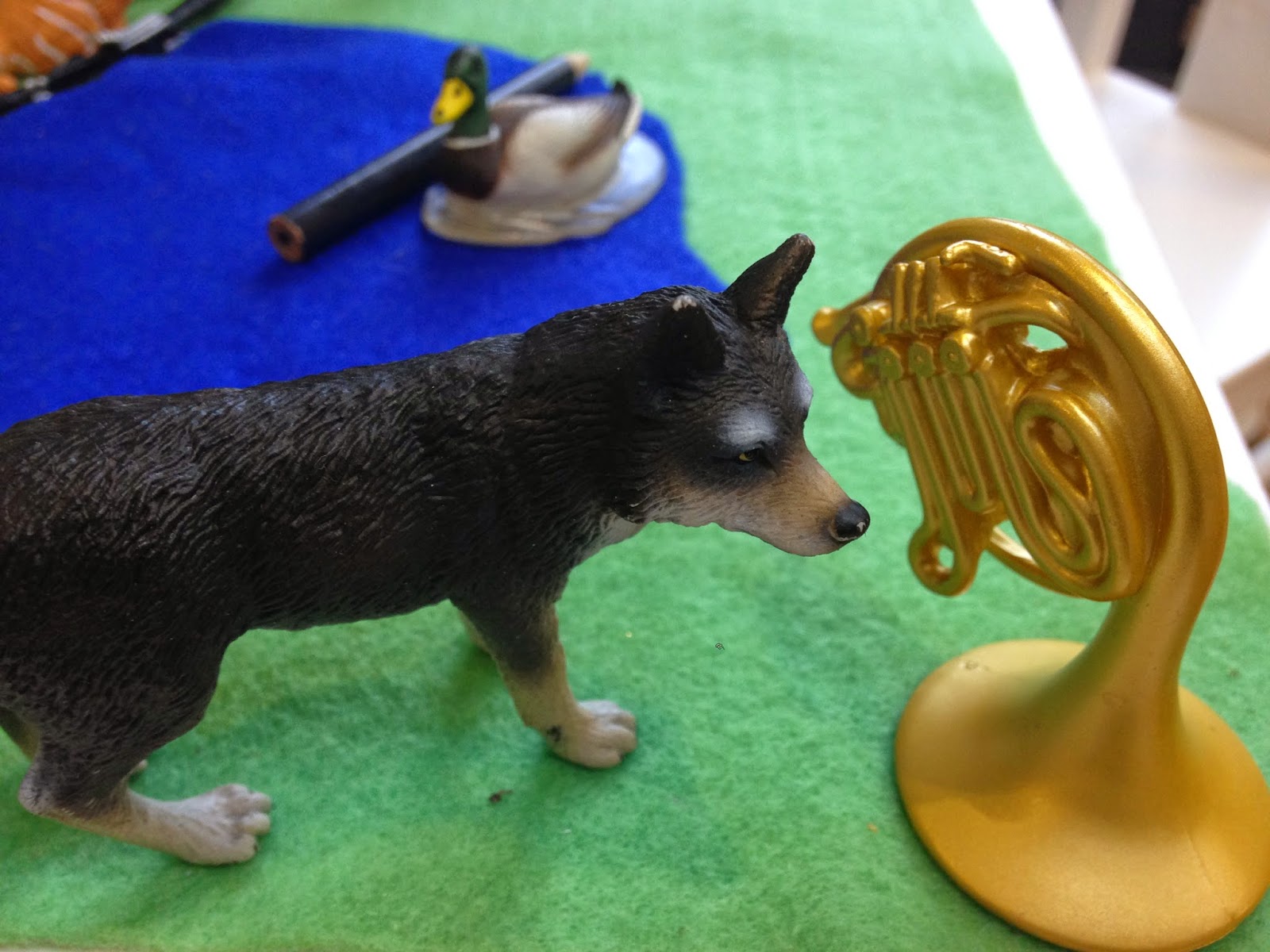 Rather inconveniently, one of Culturebaby's only Christmas requests two years ago was a Peter and the Wolf play set. Despite my scouring the internet, it transpires that toy manufacturers have largely failed us in this regard, and I set to work pulling together a DIY version with felt, playmobil and a selection of other models, including a set of Safari TOOBs miniature instruments. Happily it was a roaring success, easy to create, and gives a great opportunity for both imaginative play and visual illustration of the story and the instruments. I'd highly recommend the effort of making one. We've also since discovered a couple of great story book titles - there are various versions from Ladybird and a beautifully illustrated edition by Ian Beck with text boxes fringed with the instruments present at each point in the story. We've also found an English National Ballet School performance available on DVD, which the children love, and an academy award winning (best short film 2008) animated film.

Over the years we've also enjoyed an enormous amount of fun along the theme of The Snowman and this year I produced an extensive Christmas round up from biscuit making to imaginative play activities. Click here to read this post.

Disclaimer: We received tickets to the performance in exchange for an honest review.  We received the Safari Toob Instrument back a couple of years ago for review purposes too. All other materials and ideas are our own.
Posted by MuseumMummy at 21:13

Email ThisBlogThis!Share to TwitterShare to FacebookShare to Pinterest
Labels: Advent, Christmas, Classical Music, Peter and the Wolf, The Snowman, The Snowman and the Snowdog, Theatre for children, We're Going on A Bear Hunt