I suspect the National Trust will feature rather prominently in Culturebaby's travels. I (shamefully) have thus far failed to learn to drive, so when my parents come to stay we pack the Baby Bjorn, jump in the car and go on heritage adventures. Now we have a baby, my husband and I have also decided to take advantage of the fact that Culturebaby's luggage for a weekend trip requires a vehicle with the capacity of an articulated lorry, and holiday in England this year. We love England anyway, it is beautiful and there is so much to explore; and frankly one of the best things about England for me is The National Trust.

When I was young, my family fell victim for a time to one of the failing northern industries in the 1980s and early '90s and my Dad had a stage of being in and out of jobs. We were skint. However, whatever our family went through, my parents always ensured that they were able to retain our family membership to the National Trust. This may seem on the face of it to be wildly decadent, but it in reality ensured that we always had something wonderful (and educational) to do together very cheaply. The Trust was good to me, I believe that it made me who I am, and I feel very loyal to it in return. And I've recently seen yet another, hitherto ignored, dimension of its appeal - it is great to visit with babies.

Culturebaby started her journey with the National Trust at Benjamin Disraeli's house Hughenden Manor, appropriate as the long suffering husband believes she'll be the next female PM (though I think I'd rather she avoided climbing that greasy pole...). She was rather little at the time and permanently hungry, had an unsavoury nappy incident (known to the initiated as 'Poomageddon') in Disraeli's study (perhaps she questioned his imperialist politics?) and we had to make a hasty retreat to the babychanging facilities with her yelling loudly. This wasn't quite how I envisaged our first trip to a NT house, but frankly I was very impressed with the staff throughout. To a chorus of, 'we've all done it' and 'not to worry at all', the staff gave me a seat to feed the hungry little lady and made us feel really welcome.

Our next (fortunately less scatologically oriented) visits were while we were travel-cotting in the wolds (our first family hols). While the boys were playing golf, my mother in law and I snuck off with Culturebaby to Chedworth Roman Villa. Chedworth is one of the largest Romano-British villas in the country and it has some great mosaics, surviving hypocausts (underfloor heating systems - the Romans really were rather clever), and a selection of baths to rival any modern spa. There is a new building with raised walkways, and Culturebaby was really impressed with the projected images on the walls and the various items to touch. (Don't forget your baby carrier - prams are a bit tricky to navigate for this and the next property). We also visited Snowshill Manor. We already mentioned in an earlier post how the founder Charles Wade took his family motto 'Let nothing perish' rather seriously and restored an entire Cotswold manor house to display his huge collection of over 22,000 objects, and lived in a tiny building next door. I recently read that this quirky collection sparked one person's love of museums forever, and I can see why. It was an odd, sometimes oppressive, always fascinating, collection of handmade items. Culturebaby didn't know where to look there was so much to take in, and she chatted away at the various objects until she encountered the collection of (rather frightening) japanese armour which made her cry! I was impressed that the guides in the house took the time to talk to children and actually provided items for them to handle.
A few weeks later Culturebaby and I went to The Red House with Grandma and Grandad. It is the only house commissioned, created and lived in by William Morris, founder of the Arts & Crafts movement - rather a fad of mine. (N.B. for THE most amazing Arts and Crafts house visit Blackwell in the Lakes). This small property is accessible from the centre of London (you stumble across it in a residential street in Bexleyheath) and has a friendly little cafe (with highchairs) that feels rather like you are sitting in somebody's front room. It also has a lovely small garden, which provided Culturebaby with her first encounter with a scarecrow (I rooted out The Dingle Dangle Scarecrow from the recesses of my brain for an impromptu song) and a collection of fabrics and print blocks we were able to touch. The bold and colourful arts and crafts patterns really caught Culturebaby's attention. We combined this trip with our first visit to English Heritage's nearby wonderful Eltham Palace (one for a future post). 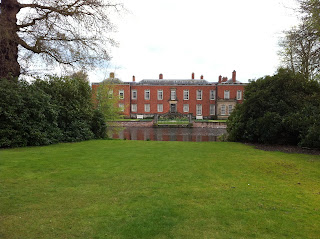 Finally, one of our best visits so far was to Dunham Massey, a favourite from my childhood. We visited with Culturebaby's Godmother and her one year old and there was so much for us to see and do. As one of the seemingly popular hangouts of northern yummy mummies, it is well prepared for little visitors. It is a great house and gardens anyway, and has a 300 acre deer park, but this time we encountered a family of tiny ducklings, chickens, deer on the lawn, stunningly coloured bushes and flowers, and the always exciting myriad of waterfeatures. The gardens are also very pram friendly, though be careful of the narrow bridges over the river - we narrowly avoided wet calamity on one of them! In the house we were offered a buggy park and, for the toddler, a hip baby carrier. One single annoying moment featured a guide telling Culturebaby not to touch a column (oh come on, we were hardly going to break it!), but in other rooms we were welcomed and given items to touch. Culturebaby was fascinated by a marble table with playing cards painted on the surface, which she tried to pick up... Best of all, we were able to play on the Grand piano in one of the rooms, and try on various items of dress in an area designed for younger visitors.

We have so much more to report on the National Trust, but we'll try to make it bitesized... and we'd love to hear about the properties and places that you and your little ones love too. If you haven't discovered the Trust yet, never fear, you can join in the fun here. I'm sure you'll soon agree it's one of the best value things you'll ever buy for your kids, and eventually forgive (or join) my evangel-trust-ism.
Posted by MuseumMummy at 15:44