Waiting for Baby (and bringing your toddler along for the ride) 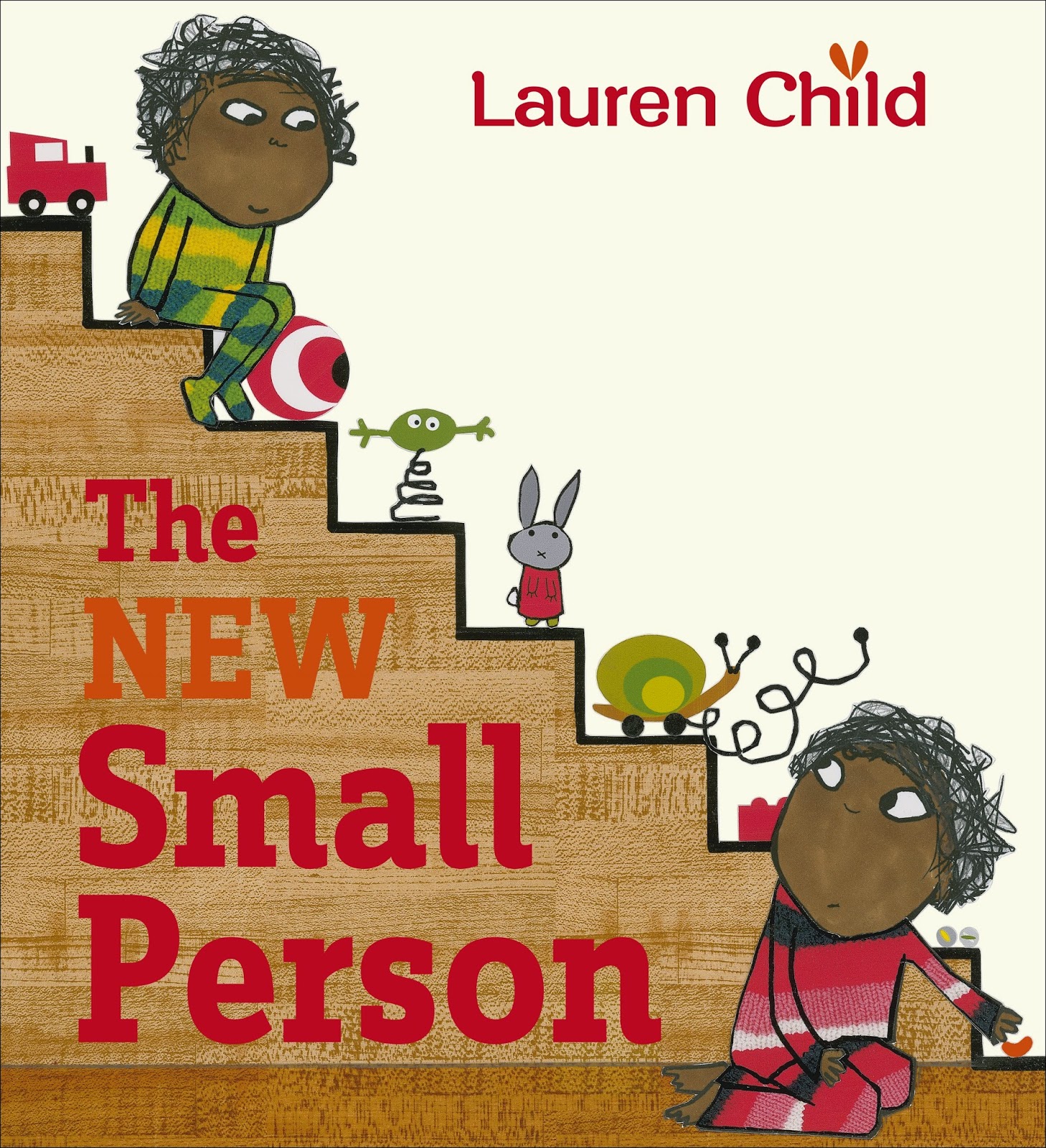 I've been meaning to write for a while about the spectrum of wonderful picture books available that helped us to prepare Culturebaby for the arrival of her baby sister a year ago, and which have enabled us to talk about and deal with the rollercoaster of her toddler emotions ever since. Prompted by the publication of two new gems to add to the parental toolkit, I thought I'd offer our top titles on the theme in the hope that other parents will find them as useful and upbuilding as we did. In addition to this I'd highly recommend five simple activities to help involve an older sibling in the experience, reduce resentment, give them ownership of the relationship and hopefully help them to be gentle and loving to the new arrival.

Of course this is always easier said than done and there have been many days when I've felt like all I'm achieving (at best) is crowd control and I've been surprised and grateful to emerge with two unscathed children. Sometimes it seems a toddler has too much tough love to give; but it does get easier, and some days you look and see you no longer have a toddler but a little girl capable of immense love and gentleness, and a sibling who simply adores her. That first year is soon over, you have had a few nights' sleep and your baby is almost a toddler. The balance of power is changing... 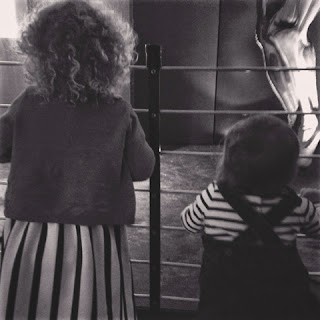 1. I invited Culturebaby to talk and sing to the bump with me, cuddle it, feel kicks and we talked about what she was looking forward to doing with the baby;

2. A couple of months before Culturetot arrived we bought Culturebaby her own baby doll to care for. This worked really well as we were able to talk about how to handle a baby, positions that are safe, and Culturebaby was able to have her own dependant to consider. This poor doll did at times end up face down in a pram or on the lawn, but at least it became a learning experience!

3. When we saw babies we discussed why they might be crying, laughing or feeding. Culturebaby became fascinated with these fresh little people and a number of tolerant parents (to whom we were very grateful) allowed her some practice cuddles;

4. We suggested that Culturebaby select a teddy bear to give as her gift to her little sister. This was extremely successful. Culturebaby has a favourite teddy which she named Bobo. She chose another for her sister declaring that this was to be Culturetot's 'Bobo'. I was so impressed with her and I know she felt this pride;

5. We bought a present for Culturetot to give to Culturebaby when she arrived from the hospital. It was a high chair for her doll, which all tied in well. I've heard the wisdom of this process from others and think it does help to involve the older child in the flurry of attention in the first few days and help them to feel like the baby cares about them too. 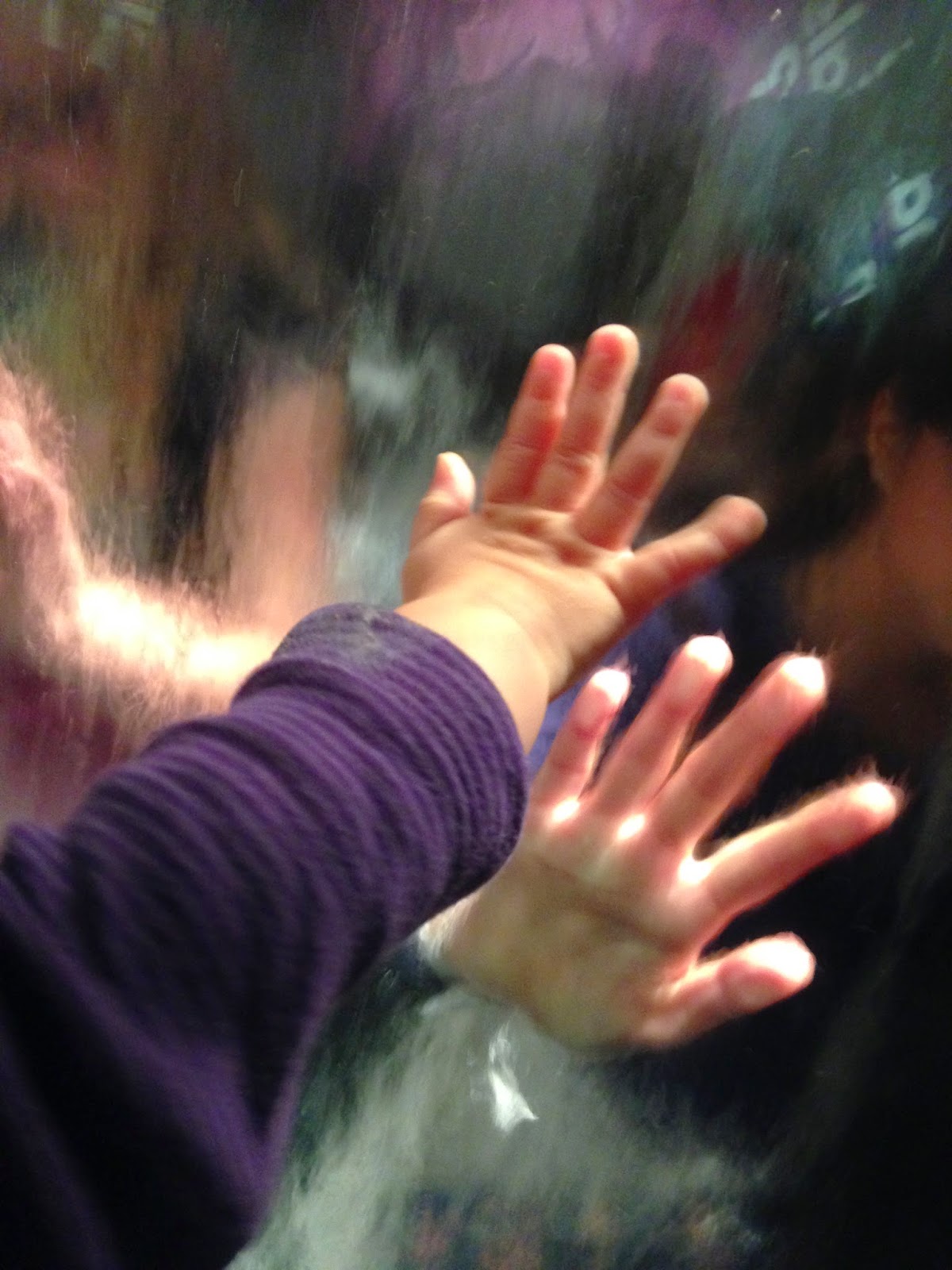 In the run up to Culturetot's arrival we read five great books. The absolute winner for much of the time was Topsy and Tim and the New Baby by Jean and Gareth Adamson and it was read and re-read to near extinction. Culturebaby loves little ladybird books and could really relate to the characters. She loved how the book followed the anticipation of pregnancy and the excitement of a new arrival and all the practicalities of the twins helping out. We were also given copies by friends of The New Baby by Anne Civardi and There's a House Inside My Mummy. These were the first two books we read and were very useful. The first is very matter-of-fact and practical; following the simple tale of a family preparing for a baby and what happens around the time of arrival. Usborne publishing has a real talent for producing simple and readable books with illustrations that manage to grip little ones with their cute and familiar characters. This was the book of choice of my friend's practically-minded three year old son. The later is more poetic and is a longer read. It is a beautifully written book and works well for slightly older children. The idea of a house for a baby inside a mother's tummy is a lovely one and perhaps a simpler concept for a child to grasp than the biological reality. This book was also immensely useful as it touches on the illness mummy experiences during pregnancy. As a hyperemesis sufferer this was all too real for us.

Consequently, we also discovered the bold, rhyming and amusing What's in Your Tummy Mummy? by Sam Lloyd. From a flea to a dinosaur sized inhabitant a child guesses what might be inside as he sees his mummy's tummy stretch and stretch. With pop- ups and a catchy text, this is great for even the smallest of expectant siblings. Finally we used the new Let's Talk About My New Baby by Stella Gurney. Toddlers love photographs of themselves and other children and this board book is great as it serves as a diary of a little boy as he waits for a baby brother. Using photographs of scans, babies, and the little boy himself, this was an original introduction to the topic. 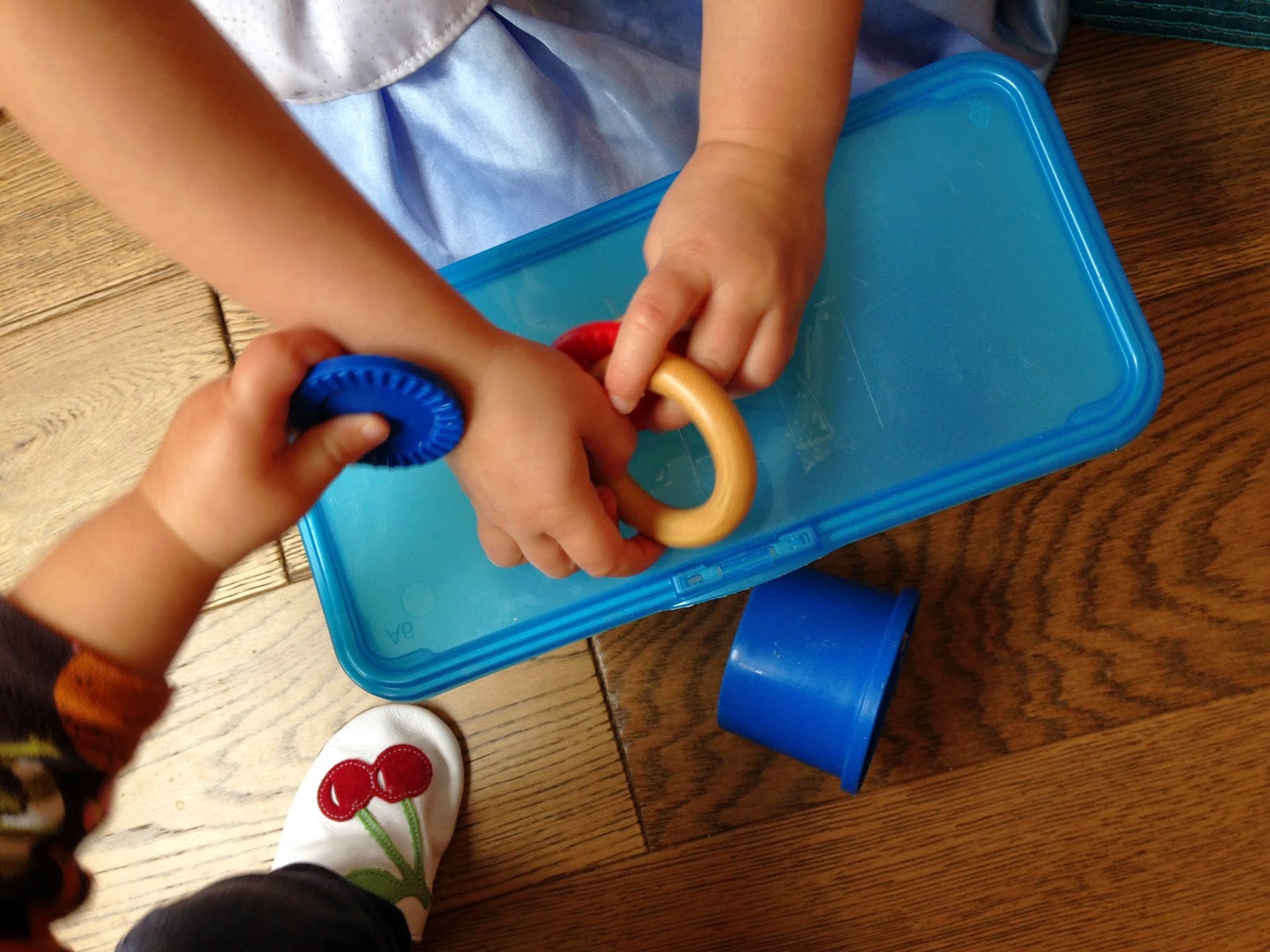 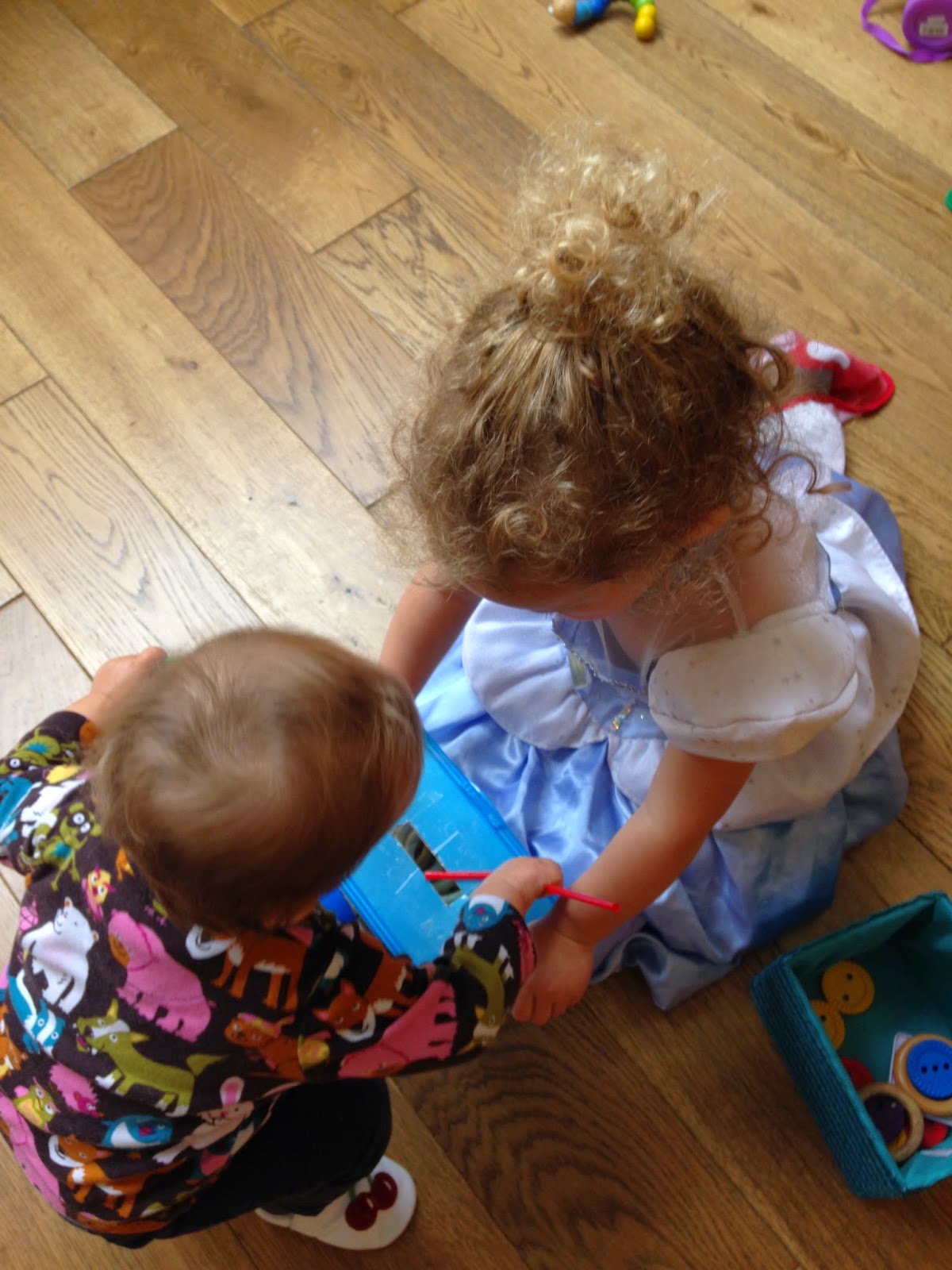 Around the time of Culturetot's birth we added a few more titles to our arsenal. There's Going to Be a Baby by John Burningham and illustrated by Helen Oxenbury is a uniquely stunning book with its amazing retro illustrations that could grace any wall, and beautiful prose. It follows a sibling waiting for his brother or sister and dreaming about who they might be and what they might excel at. At times, as is so natural with little ones, he wants the baby not to come, he doesn't want a brother. Books dealing with this inevitable jealousy and difficulty toddlers experience with a rival for attention are so useful and important. I've found that the story element allows the child to relate, but also provides a certain distance and therefore greater opportunity for objective discussion. For my ballet-mad Culturebaby, Angelina's Baby Sister by Katharine Holabird was another perfect illustration of this, as was Sophie and the New Baby by well known Catherine and Lawrence Anholt. In these, and in the initially heartbreaking Za Za's Baby Brother by Lucy Cousins (creator of Maisy), the elder child and the hero of the piece, comes to love the baby and find their place as a crucial part of the family. Za Za's Baby Brother, one of our favourites, is wonderful for a younger reader and our version comes with an animated DVD. Za Za wonders why the baby gets so much attention. No-one is there to play with her, listen to her, cuddle her. She has to learn to wait. Ultimately of course she not only gets her hugs and stories but finds the joy of a playmate, who really isn't so bad after all; in fact he is rather fun. The process of discovery that at times a sibling can be both enjoyable and also occasionally annoying is picked up in one of our best loved series of books with Spot's Baby Sister by Eric Hill. We were also bought a very welcome book by our wise friend anticipating Culturebaby's first few weeks at nursery. My Busy Being Bella Day by Rebecca Patterson is all about an older sister who starts nursery but at times wants to be at home. Nursery is ultimately so much fun that Bella forgets all this, though little sibling Bob misses his wonderful older sister. It is heartwarming and certainly made Culturebaby feel like the big girl, who is both much loved and in need of her own time to do big girl things. 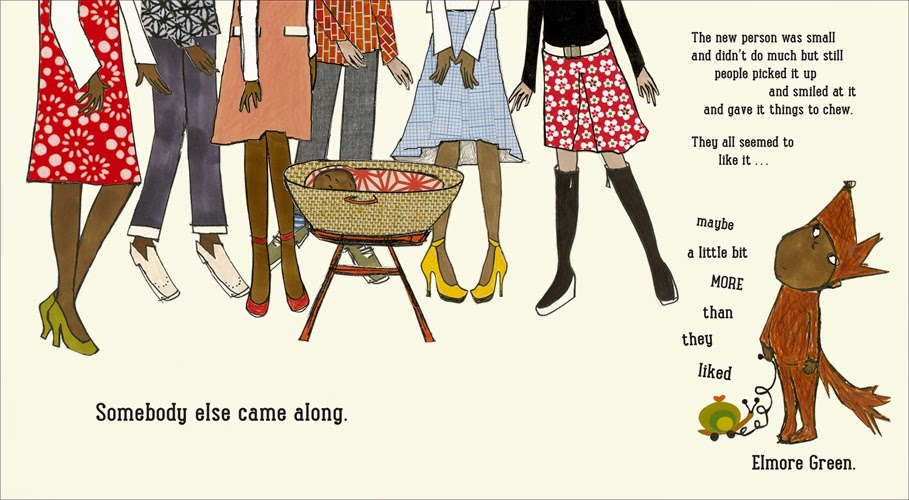 Two great new books have been published in the last couple of months along the theme and we are still enjoying them in our bedtime reading. Creative author of the hyperbolically verbose Lola and her long suffering brother Charlie, Lauren Child, introduces Elmore Green and his shock at the arrival of The New Small Person in his home. He is proud of his room, his toys, his sense of order, and he loves his stash of jelly beans. He can't understand the fuss about this new brother or why people seem to like him more. The small thing is noisy, it knocks over his toys, licks his jelly beans and (horror) sleeps in his room. Elmore wants it to go back where it came from; but it doesn't. It gets bigger. It follows him. But then one night everything changed. Elmore has a nightmare and for the first time Elmore sees he has a friend and a comforter. Things are more fun when there is someone to share it with. With Lauren's distinctive illustrations and her trademark insight into the psyche and humour of small children, this new story is a wonderful introduction to the emotions an older child may be managing with an invasion in their home - and of course it presents a heartwarming happy ending. 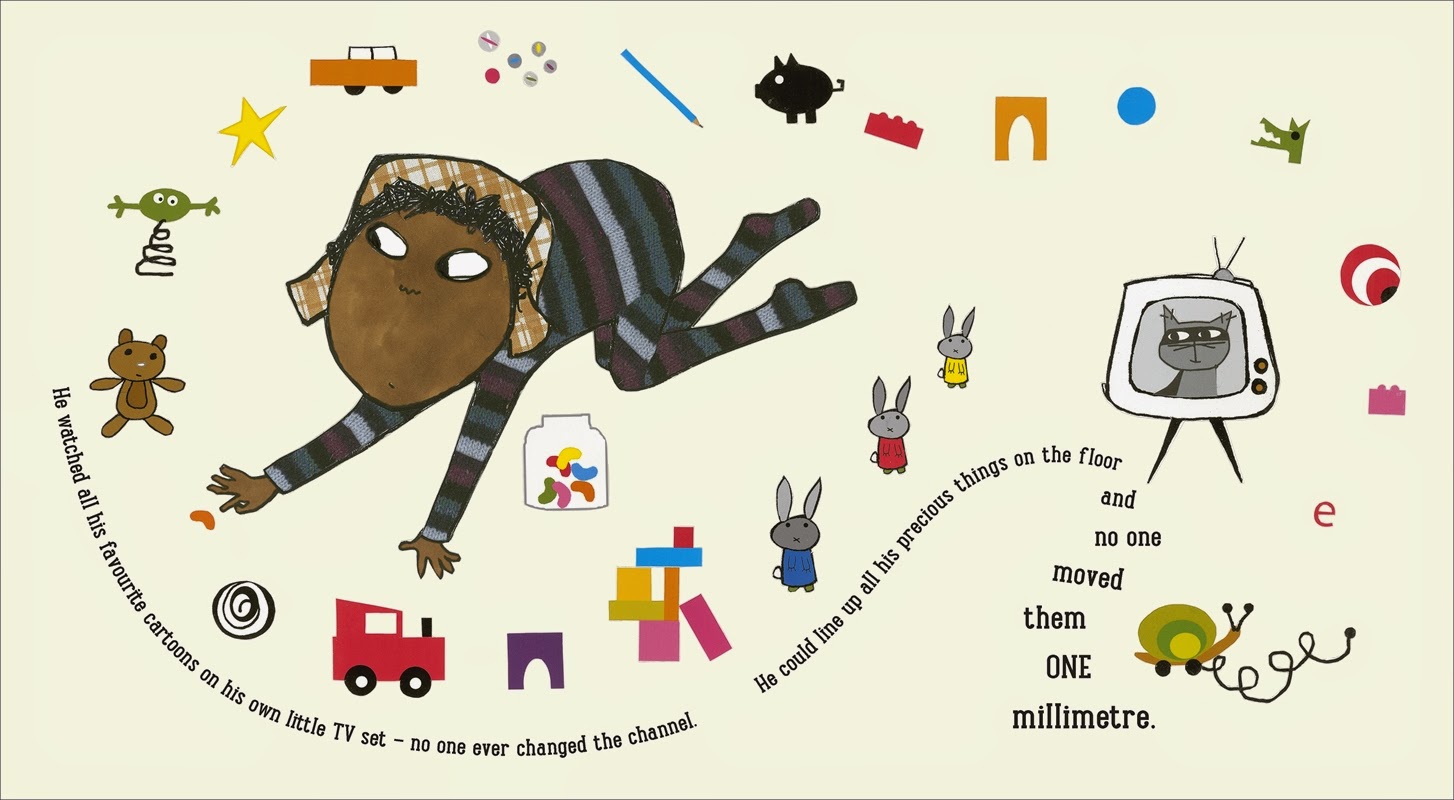 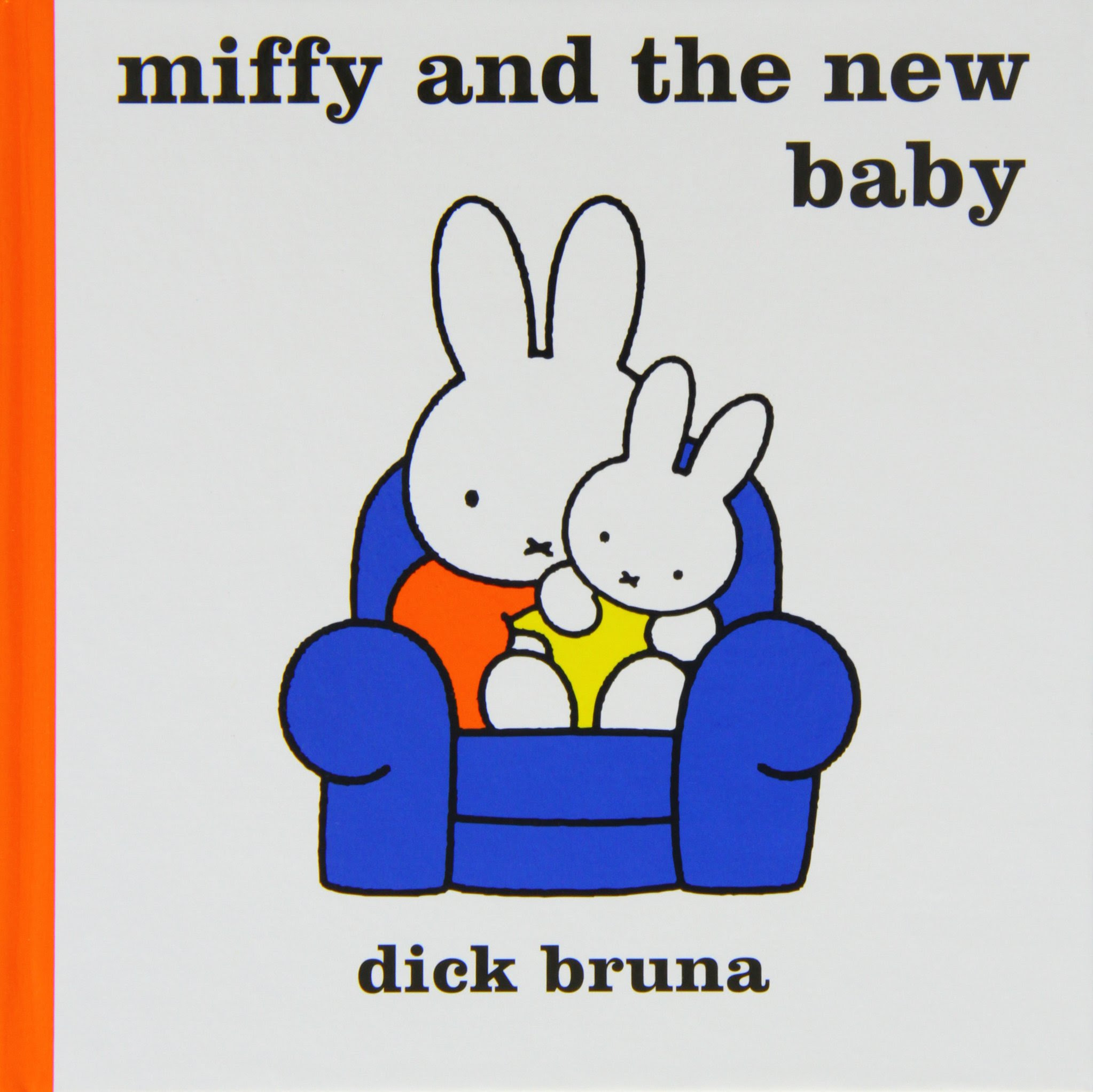 And then there is our old pal Miffy, spruced up and reworked for the modern child with Tony Mitton's modernised text and Dick Bruna's original illustrations. Miffy and the New Baby is a simple rhyming tale revealing how Miffy begins to feel so grown up when she has a little baby to make gifts for and to celebrate with her friends. As always, Bruna's endearing creation is traditional and positive. Culturebaby returns to these books again and again. She's even taken to 'reading' them to Culturetot.With timeless, bold and colourful illustrations, combined with a story for every possible toddler quandry and adventure, Miffy is a childhood friend that every little one should have the chance to make.


Disclaimer: We received review copies of The New Small Person and Miffy and The New Baby for review purposes. All other books are our own, as are all views.