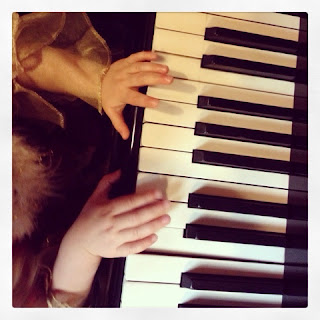 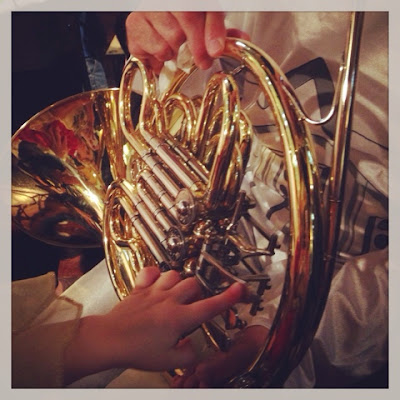 Back from yet another brilliantly accessible and engaging concert for the youngest of children, I wanted to round up some of the very best of the concert series we have encountered to date with the girls. Some of these are monthly, some annual and many have locations outside of London. From fancy dress and Christmas enchantment to opera for babies and an orchestra led by a Gruffalo there is something for everyone. What they all have in common is that they respect the child as able to appreciate the most mature music, use excellent musicians, engage and explain, are often immensely fun, and are just as uplifting for the accompanying adult as the child.

One of the fabulous things about living near London, is the kaleidoscopic array of cultural opportunities for children, and within this, there are some really exciting initiatives within the Tot's music scene. Happily, Classical Babies, has now rolled out to venues in Manchester and Surrey, and Bach to Baby visits venues in Essex, Kent, Surrey and the Thames Valley. In these welcoming, and often very beautiful, environments the child is king - feeding is accepted, crying is expected and toddlers can happily dance and have the opportunity to examine live instruments. Parents can meanwhile sip coffee and listen to excellent live music that may otherwise be out of their reach at this time in their lives. 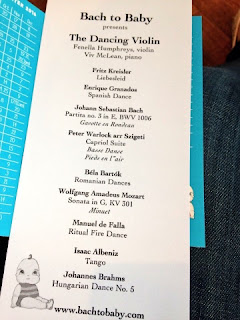 1. First the critically-acclaimed Bach to Baby. The girls are regulars at these wonderful concerts, and we often see familiar faces. Founder Miaomiao talks about the many children growing up with them. We particularly love that there are now weekend specials locally in Teddington. Culturebaby has started school so she can join us at these weekend concerts and she still loves them. A few months ago we even witnessed a trumpeter create an instrument from a garden hose (held by a multitude of toddlers) and a funnel. Our first ever session, and one of my favourites, was in Highbury where Oliver Weston, professional saxophonist and Jazz educator, and Jonathan Taylor, professional pianist and jazz teacher, took us on a great journey through the history of Jazz from the 1920s to modern day. They talked us through each piece and I felt like I too learned something and had an enriching experience for myself - so important back when the children were tiny and I spent all day in toddler classes or playing with pre-lingual tots. Since then we've seen a host of other instruments. The children are able to wander freely in these concerts, dance and look forward to a selection of nursery rhymes at the end of the session. There's now a Bach to Baby CD available called Miniatures. It features Miaomiao playing high quality and memorable piano pieces chosen for children. 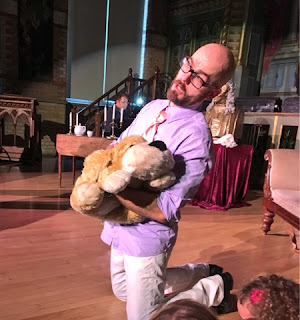 2. Award-winning Classical Babies, also happily featured in Teddington venues amongst others, is another brilliant concert programme. On entering the beautiful venues, children find mats, cushions and soft toys to relax with. Our first concert was a Christmas one complete with a basket of instruments for everyone to play along with, we've seen string concerts, contemporary composition, and most recently we went along to the stunning Grade 2* listed Normansfield Theatre to see the cast of Don Pasquale perform scenes from the opera in full costume! Opera for children might seem to the onlooker rather a stretch but the children were gripped. Babies crawled forward to listen, the children laughed at the comedic gestures and expressions of the actors and we watched as one toddler stood utterly enthrawled unmoving for a significant period of time. The actors were exceptionally good with their miniature audience, engaging them, lying beside them, serenading soft toys, and they even (to the children's delight) roped in a few parents for cameo, if silent, roles. What an entirely wonderful way to spend a Sunday afternoon. 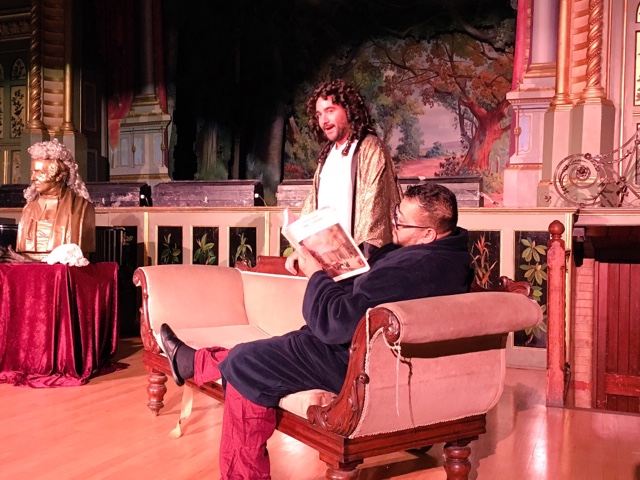 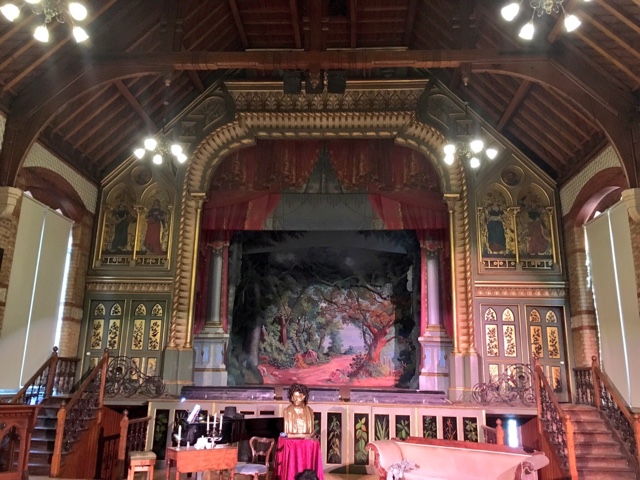 3. With a rather different format, Wigmore Hall's Chamber Tots are the most interactive and immersive of the concerts we have attended. The small group of children begin their musical journey in a room below the theatre. We started with a percussion warm-up, led by a drummer the children were encouraged to follow the rhythms and beat along. Instruments were freely distibuted. Then, with the support of a narrator and a pair of professional violinists, the children were invited to compose and suggest the next steps in a completely kinetic experience. Using their bodies to suggest the next move, to which violins responded, they built up a piece of their own invention, acting and respnding as they went. The theme of this particular event was At the Seaside, and the audience (or really participants) were taken on a journey of music and movement with periods of excitement and activity and moments of dark, starlight and relaxation. Finally, everyone moved upstairs to the theatre to sit for a number of pieces in a more formal concert setting. The whole design of the sessions was exceptionally effective and I'm just rather sad we can't get in to these more often as they are to be highly recommended. They book out quickly so do look ahead if you want to get to one of these. 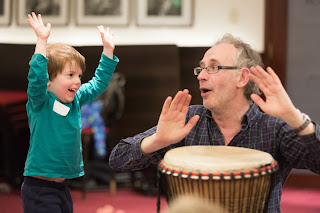 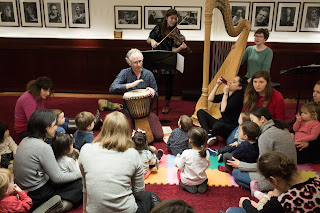 4. We have only recently discovered the Royal Albert Hall's superb children's musical programming. This summer we were lucky enough to get to two children's Proms and over half term we spent two days at the venue experiencing a diverse range of music. I have covered one of the Proms here and the other major events will be covered in a dedicated post, but thanks to a musical friend we found that there are regular smaller events too. Our first was the recent, and utterly brilliant, Jazz for Kids - and introduction to New Orleans Jazz with resident Albert's Band- which can only be described as an amazing party. The children were taught about the rhythms that give Jazz its distinctive sound, heard the history of a movement rooted in the opportunity presented by the wholesale abandonment of military instruments, met a sousaphone (a curly tuba for marching) and had the opportunity to dance and sing with abandon to the music. We parents enjoyed ourselves just as much. The children emerged utterly delighted and exhausted... 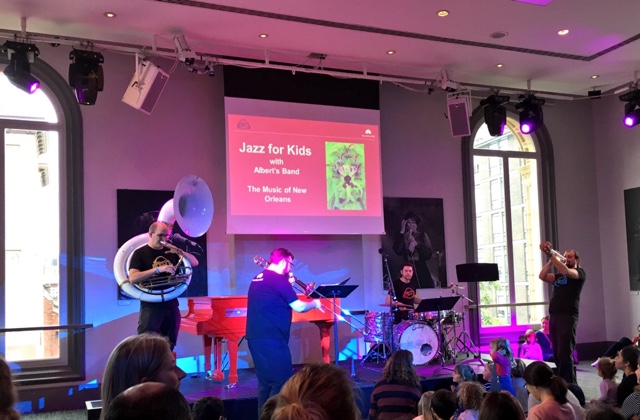 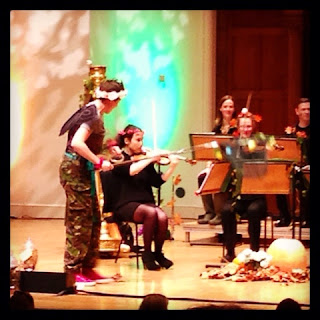 5. We wrote about Cadogan Hall's great selection of childrens events before, and their Christmas concerts (such as Peter and the Wolf and the Snowman and Paddington's First Concert - see here) are counted amongst some of our most magical moments. Their regular and well established Crash Bang Wallop! concerts are both an opportunity for creativity and hands on experiences with instruments and great musical entertainment. For an hour before, the children are invited to take part in arts and crafts, meet the musicians, handle a selection of instruments, and try their hands at percussion. The session we attended was an interactive hour of music along the theme of Shakespeare's Midsummer Night's Dream, led by a combat-trouser-clad Puck and a Sinfonia decked with flowers and foliage. 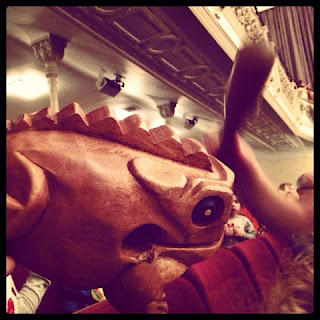 Featuring distinctive pieces such as Mendelssohn’s A Midsummer Night’s Dream, Dukas’ Sorcerer’s Apprentice, Mussorgsky’s Night on Bald Mountain, Tchaikovsky’s Sleeping Beauty Waltz and Debussy’s Prélude à l’après-midi d’un faune, and woven through with the broad theme of spells which just don't seem to go right, the event was a triumph for, at that stage, just three year old Culturebaby. Initially she watched in awe as Puck introduced the sounds of each section of the orchestra and captured them in containers - later to be released, swirled around and mixed together at will. She hid when mispaced spells culminated in the attachment of various instruments to the heads of unsuspecting orchestra members (I suspect genuinely fearing she may end up with a permanent flute for hair), and she adored the slapstick moment when Puck slept and a wolf arrived on stage to investigate the instruments. We were treated to a great selection of music (many featuring animal sounds), joined in with actions, and laughed at the fairy mischief. Several members of the audience also became percussionists by tapping a large frog instrument. At the time, as Culturebaby ducked to avoid the spells and bounced in delight at other pieces, I wasn't sure how this experience would affect her, but as the days passed and she talked and talked about it - scanning my camera for pictures of the event and listening to our story book of the Sorcerer's Apprentice - I can see that the concert (one of her first) affected her rather profoundly. 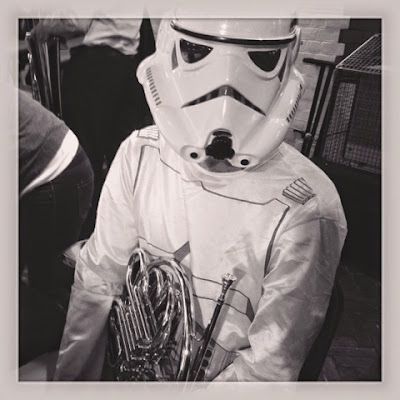 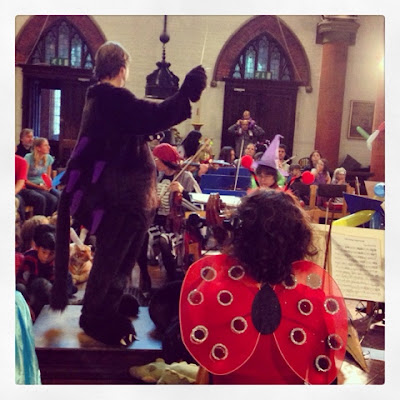 6. Finally it is really worth mentioning the St Albans Symphony Orchestra's annual Little Monsters' concert, which two years ago was a simply wonderful introduction for both the Culturebabies to their first full orchestra. Conducted by The Gruffalo and performed by a host of monsters, princesses, bugs and even a stormtrooper, an audience of children in fancy dress perched right at the feet of the musicians, a hair's breadth away from the strings. Peppered with poems and featuring both popular classics and music from movies such as Jurassic Park and Raiders of the Lost Ark, the children were taken on a magical journey through a selection of thoroughly spellbinding pieces of music. Unable to control my tearducts as I watched the youngest of children captivated as the orchestra reached emotive crescendos I felt completely elated. The atmosphere was thoroughly unpretentious, welcoming and joyful. Babies toddled around, children danced. A miniature spiderman, the winner of the costume competition, was invited to conduct the orchestra as they performed The Flintstones.

Perhaps best of all, and with a great trust and generosity, at the interval every child was invited to meet the members of the orchestra, handle any and as many instruments they wished, and have a turn at playing them. The musicians were so good with the children, gently showing them how to create sounds from their instrument of choice. I've rarely been to such an uplifting event and it was a real bargain at £1 per child and £5 per adult.

The appealing and uniting thing about all of these concerts is that they showcase excellent composition, introduce improvisation- so important to the development of creativity- and through their intelligent choices of music they show a fundamental respect for the child. Children can enjoy and concentrate on complex or classical melodies or rhythms. They can be introduced to the glorious nature of a live concert in an inspiring venue. I love what Miaomiao says about the inspiration behind her idea: "My idea is to provide top quality classical music to entertain adults, while giving children the chance to hear and explore live instruments up close during the crucial early years. Children have an innate ability to understand complexity almost through osmosis. It is my firm belief that the music our children listen to doesn't have to be dumbed down". I absolutely agree.

Disclaimer: We received tickets to one Bach to Baby and one Classical Babies Concert (we have attended very many since), and the tickets for Cadogan Hall, Wigmore Hall and The Royal Albert Hall events were given in exchange for an honest review. All others we bought ourselves and to many we return again and again! Thanks to Wigmore Hall for their photographs. Just a note to say I don't presume to give an exhaustive list here. We have heard concerts at the Bridgewater Hall in Manchester, Southbank Centre and Barbican are also fabulous. We just haven't made it to some of these yet... 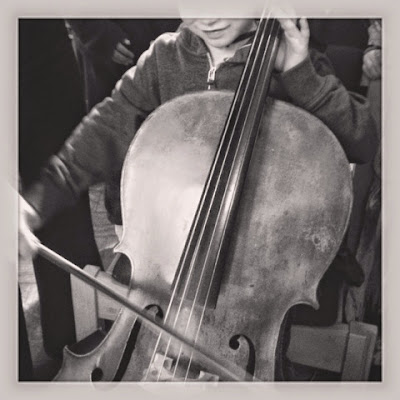