Culturebaby and I went to see the new Damien Hirst retrospective at the Tate Modern yesterday afternoon with one of her little buddies and his family. If ever you could design an artistic baby playground, the Tate Modern at present is the closest thing to perfection with its combo of Kusama and Hirst. Culturebaby was still excited by the evening and, despite a strong rebuttal of a bowl of salmon and veg puree (I'm hoping she hasn't inherited my anti-fish tastebuds), she was smiling and chatting, and excitedly cooing at a Hirst butterfly print right up until bathtime.

On so many levels the exhibition was fabulous, and I loved having Culturebaby with me as I experienced so much more than I would going alone. I'd had a taster of what to expect as we had recently watched a brilliant programme (Damien Hirst: The First Look) with surrealist comedian Noel Fielding (incidentally, this choice of presenter was an utter stroke of genius by Channel 4). With my daughter in mind, I really tried to look at Hirst's work from the perspective of a baby and discovered a colourful, sensory, engaging wonderland where some might see rather more morbid themes... I'm convinced Hirst is very much in touch with his inner child; there was so much in his work for the babies to delight in. As usual there was much of the usual leg waggling and excited squealing, and several passers-by stopped to chat about their reactions. (For picture and video tours see here and here) 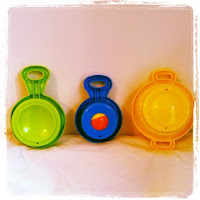 On entering the exhibition we encountered Hirst's early work, described by one review as 'juvenillia'. It is rough and ready, but very colourful. Culturebaby and I stopped to examine the similarities between her (rather odd but favoured and, therefore, brought along) stacking pan toys and the work 8 Pans 1987. Indeed, no sarcasm is intended here. Throughout the exhibition many of the items are everyday, simple, bright, and often childlike - and therefore easy for Culturebaby to relate to. We then moved through rooms hung or decorated with colourful dot paintings, and like Egyptian tombs, these bright walls encase rather more macabre contents. But for Culturebaby the flies in A Thousand Years 1990 (a life cycle from cow's head, to flies, to fly killer) were merely dynamic and engaging; and the fish, lambs, cows and shark preserved in formaldehyde are (rather serene) characters recognisable from books such as Fluffy Chick and Friends (Incidentally THE best cloth books ever). I think passers-by may have been rather amused by the animal noises I was making in front of the various cases, but Culturebaby was having a great time! 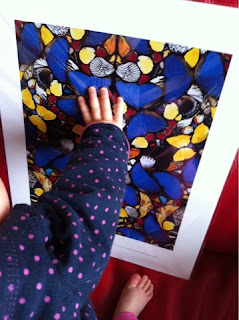 We then moved rather hastily past the rows and rows of cigarette butts (hopefully the smelly, giant ashtray may have put her off for life...) but stopped to examine the beautifully reflective casing and colourful contents of the pills in Lullaby, the Seasons 2002. Next, the series of monochrome, bright canvases with butterflies mounted here and there, entitled In and Out of Love 1991, were really appealing to the babies - they tried to reach out and touch the butterflies beyond the glass - and this was followed by a wonderful room where colourful and patterned live butterflies were hatching, flying around, feeding, and landing on us. Could it get more exciting for babies? Apparently so. The best space came a little later where a giant inflatable beachball bounced suspended above a fan in the centre of a room (Loving in a World of Desire) whilst giant circular paintings span on the walls. The room was uplifting and joyful, the former work jolly; the latter magnificent. And the sensory fun continued... Culturebaby yelped with excitement as we entered the room containing the (rather sinister to an adult, but incredibly shiny for a baby) surgical equipment in cupboards, and continued to fight her (long overdue) sleep in the rooms containing the exquisite and colourful Doorways to the Kingdom of Heaven 2007 (stained glass windows made entirely of butterflies); and the glimmering Judgement Day (a huge cabinet full of jewels). Then, after a well timed nap over lunch, she woke up just in time to see the glistening (and not at all tacky as I had expected) jewel encrusted skull For the Love of God. We had it to ourselves for a moment, sparkling, relic-like, at the centre of a pitch black room, and it was rather awe inspiring for little and big eyes alike.

For me, the brilliance of Hirst is that his work not only excited Culturebaby, but it fascinated me as an adult (essential for us mummies!). I know Hirst is considered rather controversial, and his works questioned by some as 'Art', but I found much of it beautiful, some disturbing and, still more, thought provoking. The range of exhibits explore his eschatological preccupation with life and death, beauty and decay, heaven and hell, and make the viewer think about these topics too. My husband is rather baffled and amused at my love of graveyards. By the umpteenth Egyptian tomb on our honeymoon he began to admit hieroglyph-fatigue. I'd consider him a (loveable) lightweight in the mortuary line, but to be fair I did spend most of my undergraduate years poring over books about obscure funerary rituals and uncovering Roman remains. (My favourite popular books on the topic by the way are Dancing on the Grave, The Mummy Congress and Necropolis. All worth a read). I find the subject fascinating, and not at all depressing. Whilst reviews discuss Hirst's emphasis on the emptiness of death, the frivolity of life and nihilism (and no Laura Cumming I don't agree that it is tired), I absolutely agree with Richard Dorment that there is a striking undertone (perhaps overtone?) of redemption in the progression of the exhibition. Last week I lost my wonderful Grandad, I loved him very much and I'm indescribably sad, but I'm so happy he met my daughter and was blessed to see his children's children's children. For me, works such as The Physical Impossibility of Death in the Mind of Someone Living 1991 and The Incomplete Truth 2006 (rather a glimpse of heaven), do not speak of nothingness, but have an immediate and positive resonance of the eternal. I found much of Hirst's work to be very hopeful. Towards the end of his life, when asked what kept my Grandad positive, he replied 'the babies, I think of the babies'. I remembered this when I peered into a huge cabinet of jewels (Judgement Day) and realised after a couple of minutes I hadn't even noticed them. I'd been too preoccupied with the clear reflection of myself with my gorgeous little girl beaming back at me. I really hope that's what Damien intended in this work.

Although I really find myself questioning the morality of a couple of Hirst's works (e.g. the made-to-die flies in A Thousand Years 1990), and was genuinely disturbed when I saw that the mother in Mother and Child Divided 2007 was pregnant (why please Damien?), the exhibition is very baby friendly. If you see it with your little ones we'd love to hear what you thought. I think we will go back and back; so if over the summer Culturebaby and I are ever missing in action, check out the Tate, we may well be found in the Hirst playground...
Posted by MuseumMummy at 18:13