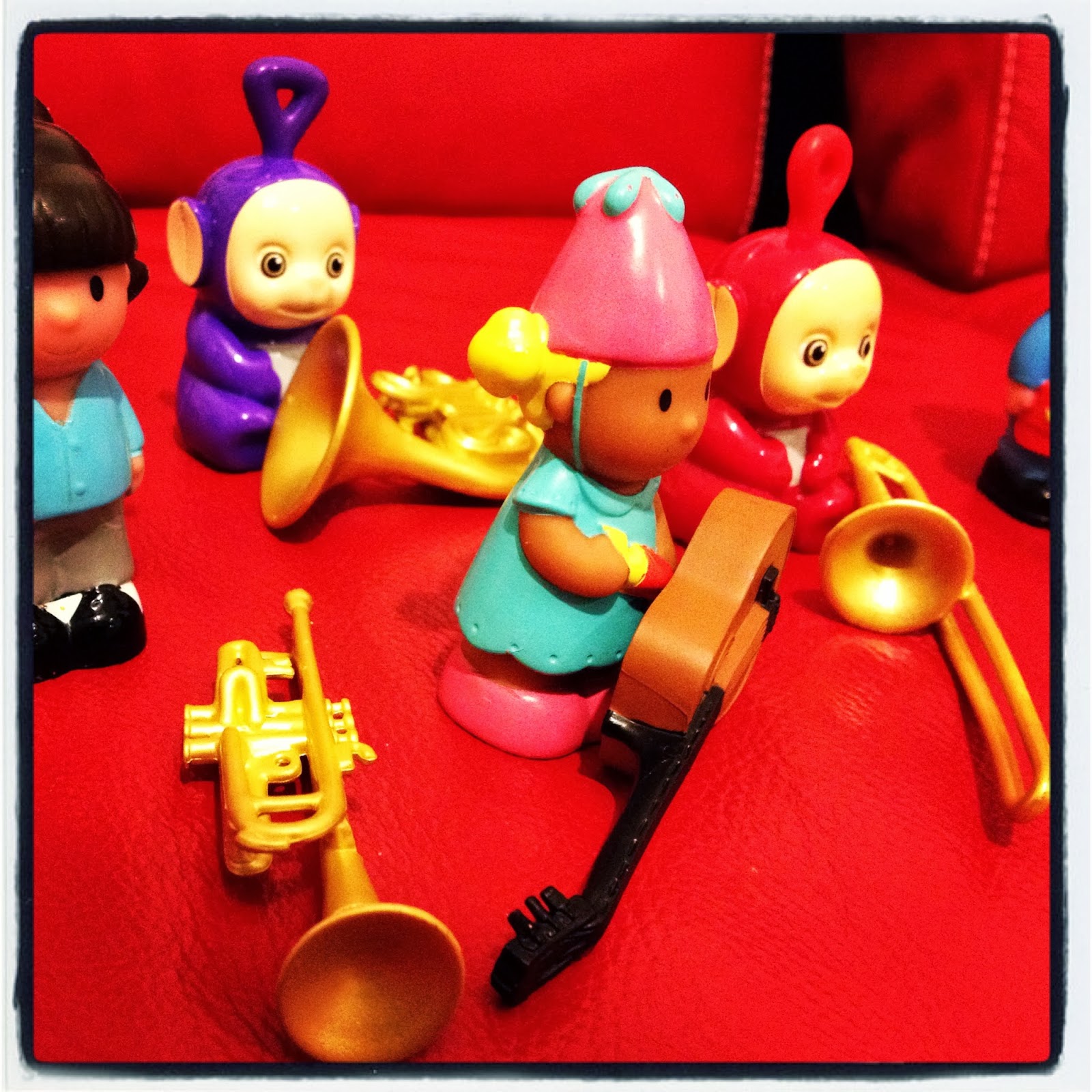 Back when Culturebaby was 9 months old, I wrote a post (here) about introducing her to music and talked about how right from the day we brought her back from hospital she's always shown a real interest in it. Since then we've done wonderful dance and music classes together, visited interactive exhibitions of musical instruments, listened to varied music and done a lot of singing and playing of instruments. She seems to be showing a real ear for it these days and never ceases to amaze me with the way her face lights up when she sings and dances, how she improvises and creates songs (even if they are entitled Poo Poo Everywhere), and how she can describe exactly what is going on in the Snowman from just listening to the audio soundtrack. Consequently, her new little sister Culturetot must have an encyclopaedic knowledge of nursery rhymes ingrained in her psyche, absorbing them in utero as her hyperemesis-inflicted mother curled up with Culturebaby in bed and sang them over and over, (and over), on request. Our well thumbed copy of the stunning Nursery Rhymes by Nicola Bayley was the first book my mother ever bought for me, and is now an absolute favourite. 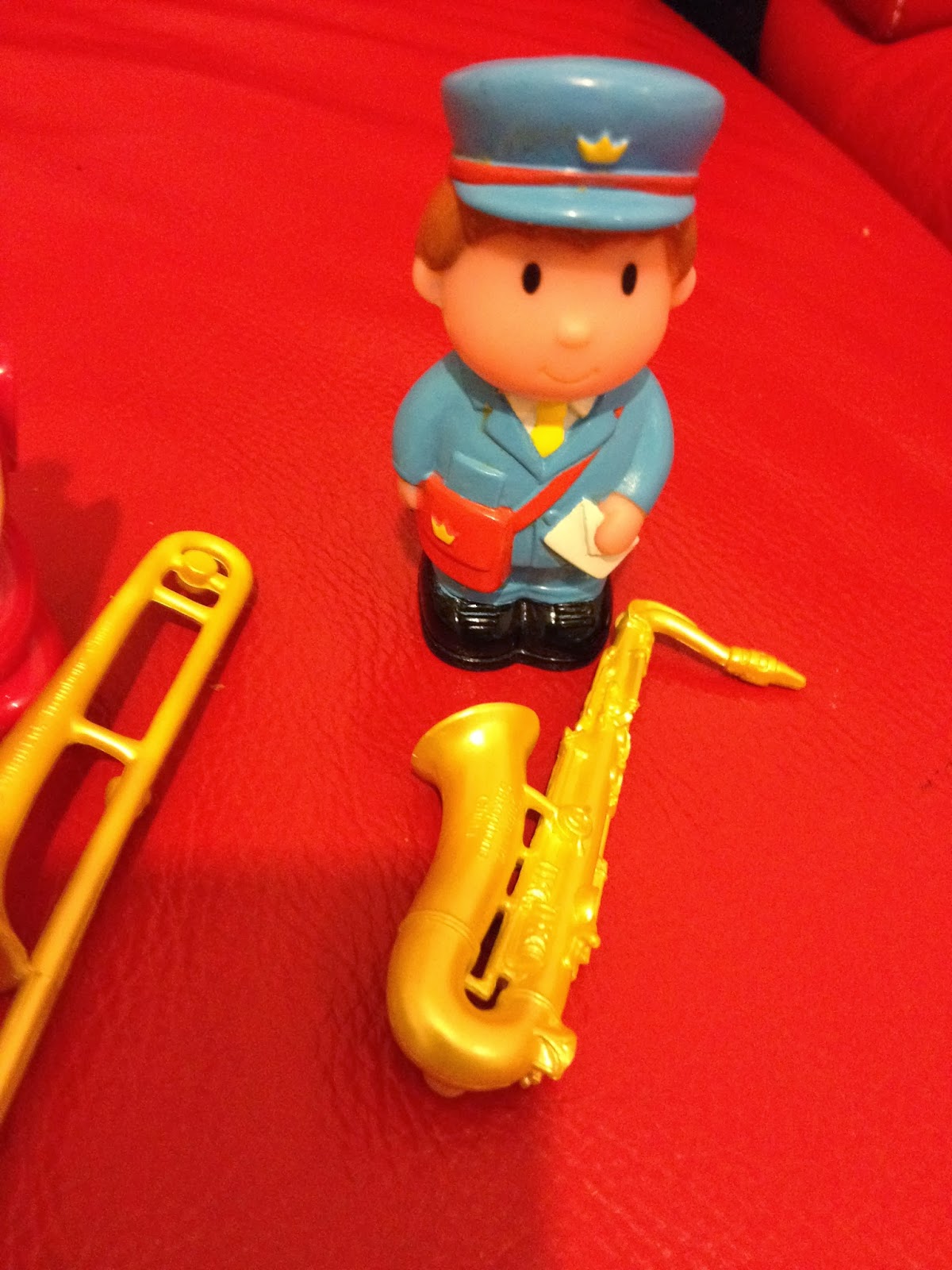 We have been sent a couple of musical resources in the last few months that I want to review here because I think they are genuinely great. One of Culturebaby's, perhaps unexpected, favourite activities is playing with a musical instruments educational TOOB created by Safari toys. As soon as we opened them, Culturebaby began to incorporate them into her imaginative play. It has been rather amusing to watch her Happyland characters each be assigned an instrument and organised into a band. She's also been enjoying learning the names of the various instruments and the positions in which they are held, and I've been pointing them out in the music we hear. I think these educational resources are absolutely brilliant. I was planning to incorporate them into some planned learning activities over the next year (and still hope to) but I hadn't necessarily expected them to be a hit just in themselves - they have really captured Culturebaby's attention. Between 18 months and 4 years is Montessori's 'sensitive period' for interest in small objects (the time our little sponges really show an interest in and concentrate on this area). This is so evident with Culturebaby's play with small models like these. She lines them up and orders them, uses them in imaginative play and carries them around with her. Though the TOOBs are small and warn against being used by under threes, a supervised two year old can also get a lot out of exploring them. They come in a wide range of sets and feature everything from accurate representations of landmarks and animals to Egyptian and Roman characters and gods. They are handpainted and really well made. I can imagine that these TOOBs will be versatile enough to be used throughout childhood for a large range of educational activities, which makes them great value and a wonderful resource to collect. 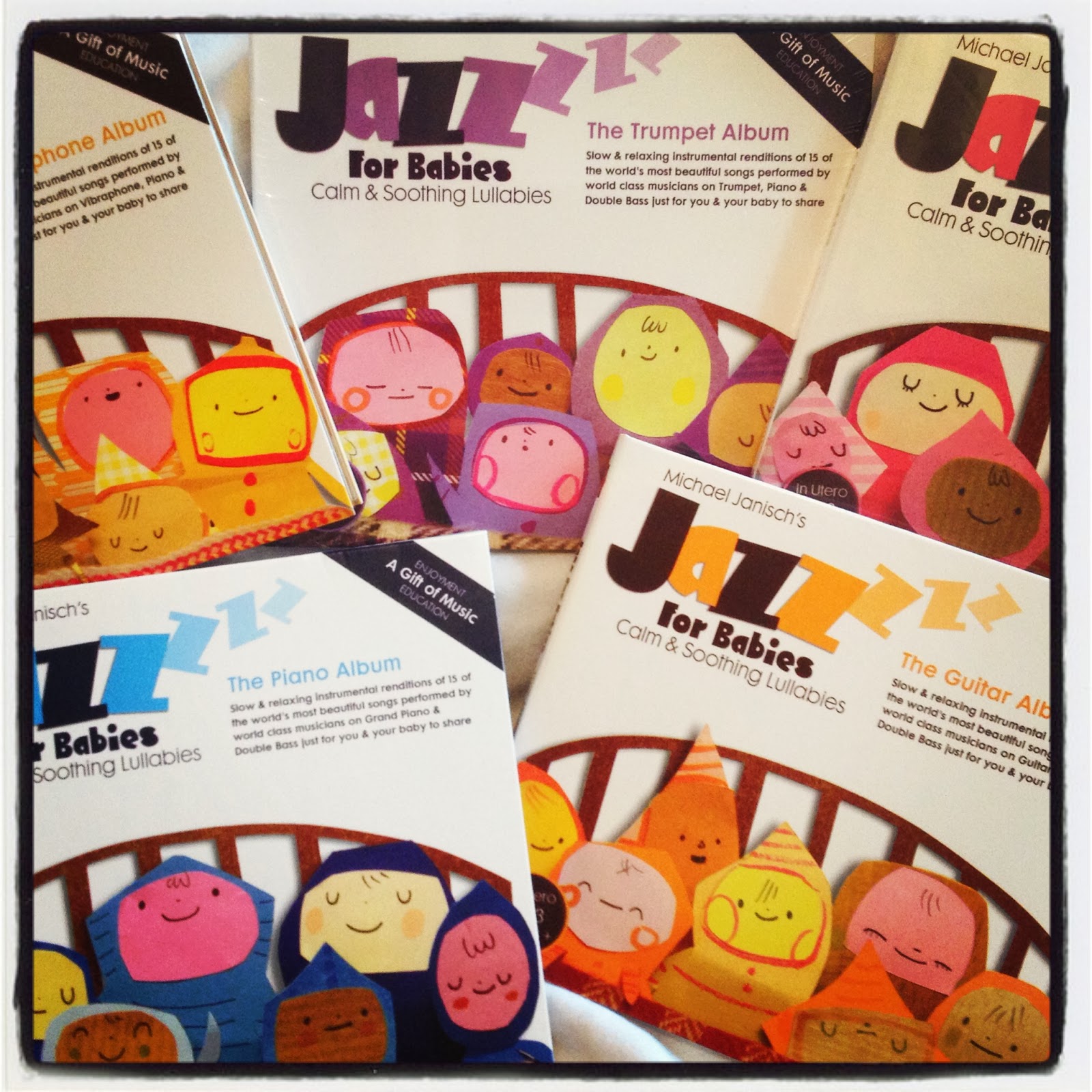 Culturetot has also been sent some rather fabulous albums. I read an article about a really interesting project by a Jazz bassist called Michael Janisch, who, when his wife became pregnant and unhappy with much of the music he found out there that had been produced for babies, created his own high quality jazz recordings with other professional musicians. Like Michael, I've always been keen to expose my little ones to quality music from the start, and he kindly sent me a set of his fabulous cds for us to try. I think they are inspired and I really wish that I'd had these when Culturebaby was tiny too. Each album is focussed around a lead instrument (piano, guitar, trumpet, saxophone and vibraphone) and features a range of slow and relaxing interpretations of old classics and some well known newer tracks too. When Culturebaby was little I did have some great classical music that I shared with her, but it is wonderful to find other genres that are not irritating, aimed at babies with some real thought behind them and hugely relaxing too. I'm sure you too have stumbled across some of the truly horrendous recordings out there for children, and as much as we love Fisherprice and pals, there are many times when I've been sorely tempted to to throw one of their electronic items out of the window. The Jazz for Babies series aims to introduce children to the right kind of music at the earliest age, believing that this will help them to "become calm and serene as well as develop creativity and individuality". We certainly need calm and serene (especially while we are edging around our perennial builders)... 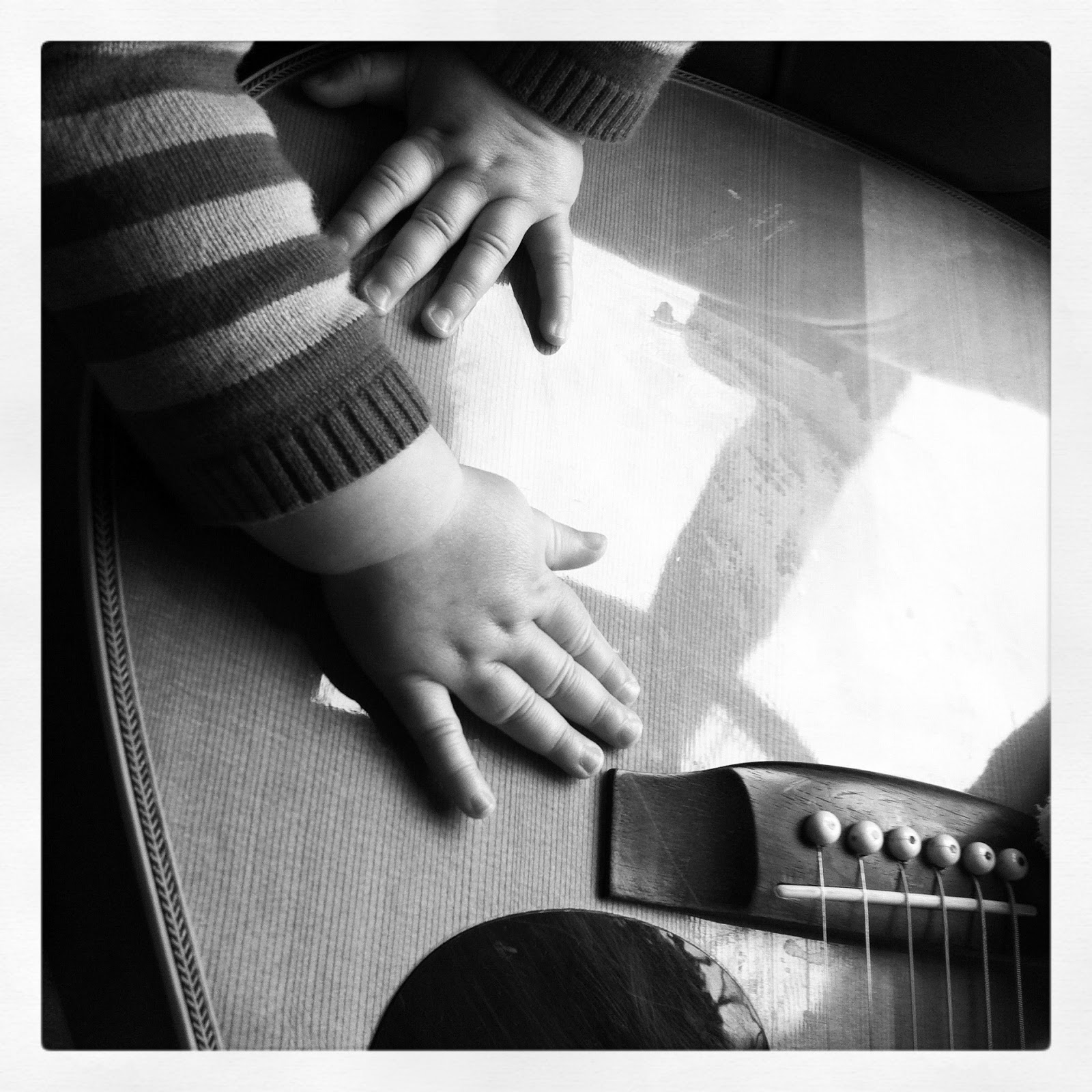 A while ago I wrote about the evidence indicating that babies can hear and are affected by music played to them in the womb, and can remember it up to a year after birth. From around 20 weeks, babies can hear, although this will be muffled by the liquid and tissue around them (like listening to music while underwater). There is certainly rather a lot of debate on the internet about whether playing classical music to babies pre and post-birth helps their brain development. Some believe that it does, others question the evidence, but it is believed that listening to music reduces stress for a pregnant mother, which (if anyone had as sickness-ridden a pregnancy as me) can only be a good thing for mother and baby (for an interesting article on this see here). Plus, of course, listening to and playing music as a child, while it may or may not make you better at map reading or maths, is likely to make you more musically adept, and develop a love for it - which is of course the most important thing. Towards the end of my utterly rotten pregnancy therefore, receiving the Jazz for Babies cds and listening to them with my little bump could not have been more welcome, and I was reminded of this again these last couple of weeks as I've been playing them to Culturetot in the evening after long busy winter days. I particularly love the piano and guitar ones, and the more traditional jazz tracks. I'm less keen on the vibraphone personally, but it is still a really interesting sound for the Culturebabies to learn.

There are a number of reasons why I think these albums are great. Firstly they are really very relaxing for me. I need this at the moment. I love Jazz and really miss the days when I sang in a big band. There are some brilliant songs included and some of the versions are really emotive (the guitar rendition of You Are My Sunshine tipped Culturegrandma over the teary edge - her mum's lullaby for her). I'd happily play these albums at a dinner party of adults not just to my children. Last week I also really observed Culturetot turning her head to listen to the music as she smiled and cooed at me, and then eventually she drifted off to sleep. I love that, because they are instrumental, I can sing along to the tracks for her. There are some beautiful melodies recorded - including lullabies and love songs. Just the sort of thing that I'd be prompted to sing or say to my children anyway. Culturetot really looks at me and mirrors mouth movements as she lies on my knee when I sing. It feels like real quality time for us. I also think it it important that there is quite a lot of improvisation in the recordings as it is really good for little ones to hear this creativity and variation in the music they listen to. I use these cds for bedtime, in the car, and as background to playing in the day...

It seems others are also impressed with them - they have won a number of accolades and international awards recently. I'd really like to see Michael produce a Christmas album, and, given Culturebaby's penchant for dancing, I think that a fabulous next step for Jazz for Babies could be some excellently recorded faster and more vibrant recordings to inspire little ones to dance. I've noticed Culturebaby really start to move to jazz rhythms and she seems to really enjoy the quicker tracks we listen to (recently some Stephane Grappelli and Glenn Miller). Perhaps some Jazz for toddling next?

You can listen to 5 of the tracks here. Number 4 is particularly lovely:
Disclaimer: We were sent the music TOOB by Safari via their UK distributor, Alyss Toys, for review purposes. Jazz for babies also sent us the cds to review. However, I approached them first and think the products are genuinely great.
Posted by MuseumMummy at 21:10