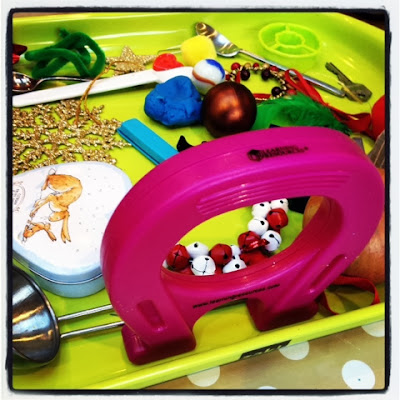 At the start of a new year that will be significantly maternity flavoured, it seems most sensible for my new year's resolutions to be of the more manageable sort (get through each day with two children in tact and preferably happy and interested; cook healthy food for aforementioned children etc...) and with a few aspirational ones thrown in (try not to be grumpy with Culturebabies or long suffering husband, read more, write more, finally learn to drive, send thank you cards before everyone disowns me), but then of course it wouldn't be fun without a few tricky ones too. I'm always rather overawed and inspired by the range of creative and well organised mothers out there in the blogosphere, who seem to be able to balance several children with making extremely beautiful and educationally stretching home-made activities AND post comprehensively about it all too. Plus they can bake and sew. I'm certainly not one of those mummies, but I plan to take a dab of inspiration from them to get as organised as I can and actually implement some of the ideas I've accumulated.

A few years ago I might have shuddered at the thought that I'd relish selecting a laminator or designing toy shelving, but these days I've embraced the inner boffin. In an earlier post I wrote about the wonderful Horniman Museum and Frederick Horniman's poor wife who reportedly said that 'either the collection goes or we do'. They moved house soon after (and Frederick's collection stayed with them). Following months of building work I'm loathe to ever move house again, so given my similar penchant for hunter-gathering in the educational department, I've commissioned giant shelves. I have promised Culturedad they WILL fit our books and toys. The megalithic book cases are currently in construction (I'm informed they are around half a ton) and I intend at least to order them, keep them that way, and use them to ensure that I can actually find things. I also plan (one of those aspirational ones again) to provide Culturebaby with only a few toys at once so that rather than the lounge looking like a post-apocalyptic landscape, she will be able to really focus on what she is doing.

Check out these bad boys: 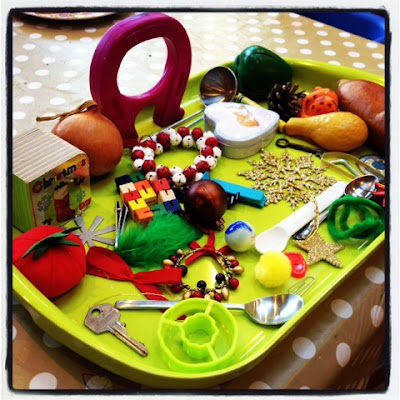 Culturebaby is lucky to be attending an outstanding Montessori nursery two mornings a week. She is clearly enjoying both the activities and environment and is also being stretched by the opportunity to learn alongside children who are older than her. It is really inspiring to walk through the door and experience the atmosphere of content concentration that exudes from the children that is so very different to a playgroup. This year as Culturebaby is now two, I'd really like to try to produce some planned trays and busy bags for her to investigate at home too, especially if these can follow a theme she is interested in. So *with all the best intentions to continue* here's our first attempt at a Montessori-style tray: exploring magnetism. 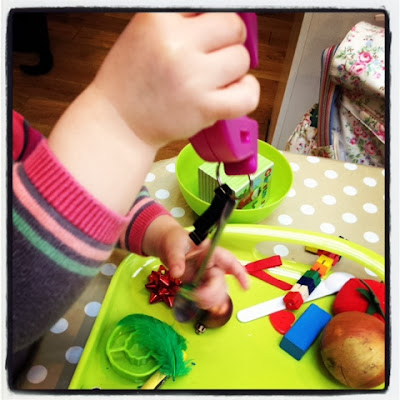 There are some helpful ways to structure this sort of activity, whilst bearing in mind that children will choose to manipulate materials in ways we might not consider and their play will inevitably take directions we wouldn't wish to predetermine... 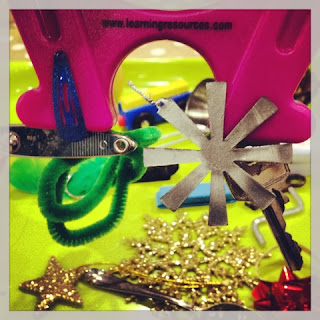 First set up the activity and demonstrate it to the child, then leave the child to investigate and play (though I do join in when invited), then finally ensure the child leads the all important tidying up. Don't be disheartened if they don't seem interested initially, as sometimes toddlers just aren't in the mood for a certain task. I've found Culturebaby comes back to things and has moments of intense concentration on new projects and other times when the same activity won't flick her switch. 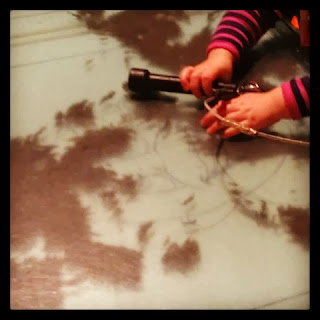 Our first tray was based around a large learning magnet Culturebaby received in her stocking. I've noticed she has been very interested recently in joining all her Brio trains into long snakes of carriages. Through trial and error she has also been working out that one side of the carriage will stick to another, while the other stubbornly refuses to. With this in mind I set up a very simple tray using a wide range of materials for her to investigate using her large Magnet. I also provided two pots for her to separate the materials into - those which are magnetic and those which are not.

The tray featured all the usual materials: wood, plastic, vegetable, metal, fabric, playdoh, paper, foil, etc... Some are rather obviously metallic and others not, but for additional interest I also threw in a few unexpected materials such as a silver spoon and metallic-looking plastic (not magnetic), pipe cleaner (magnetic) and other magnets such as brio carriages so she could test attraction and repulsion.

Culturebaby has enjoyed the task and played with it a number of times in small bursts. She's learned a number of the names of items on the tray too and has been using the large magnet to move train carriages along through magnetic repulsion. I was also delighted to see that other visitors to the house were caught exploring the tray too, including adults! 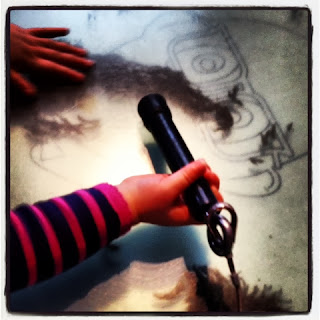 We made a trip last week for the first time to the wonderful V&A Museum of Childhood at Bethnal Green. This East End wonderland deserves its own future post but we were very pleased to discover, amongst the plethora of brilliant hands-on areas, a magnetic drawing table filled with iron filings for Culturebaby to explore. She concentrated on it alone for quite a while and was clearly making the connection between this and the tray she had at home. Likewise, in helpfully timely fashion, at GalleryOldham this week we encountered a magnetic fishing game as part of an exhibition, complete with artificial pond. I'll have to unearth our excellent Melissa and Doug fishing puzzle from amongst the boxes at home again as this follows the same principle - useful not only for its exploration of magnetism but also for the practice of steadiness in handling objects for toddlers.

At this stage I haven't gone into complicated explanations about magnetism and its causes, nor have we looked at books on the topic or used written words in the activity yet. It seems enough for a just two year old to have the opportunity to look at everyday materials in a new way and enjoy making them stick together or move away like magic. It's a simple activity that, after testing, I'd really recommend for a two year old. It only took 10 minutes to pull together and has provided rather a lot of enjoyment. Plus once you've done it, you begin to notice magnets everywhere - and so does the toddler... 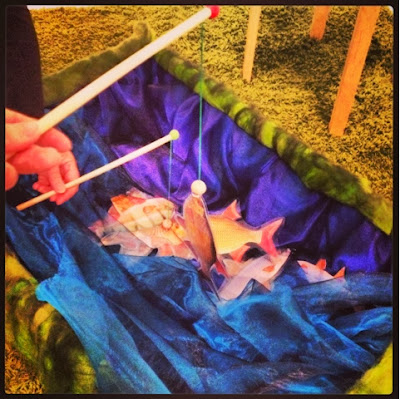