On Saturday we returned to our local theatre to see a wintery interpretation of how Lewis Carroll's Alice would deal with falling into a land of winter, ruled by a despotic Red Queen and her deck of playing cards. Combining elements of Wonderland, Through the Looking Glass and iconic poems such as The Jabberwocky, this creative concoction was thoroughly effective, gripping and rather emotional. As with much of Carroll's ingenious creations, the apparent nonsensical prose holds timeless wisdoms. The Rose Theatre's recent Hunting of the Snark, likewise, has had a surprising legacy with the girls. 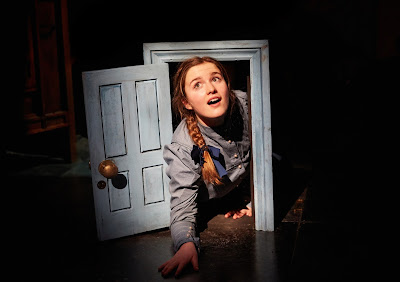 Alice, brought up by loving parents, loses her mother during the war, and her father's mind to post traumatic stress. Formerly surrounded by joy and wisdom, she finds herself at the mercy of a joyless aunt who is set on her attending a finishing school. On receipt of the parting gift of her father's watch, Alice's fervent wish to halt time immediately leaves us at a permanent two minutes to four. A white rabbit appears, steals the watch and leaves her with no option but to follow him into Wonderland to retrieve her precious gift.

Encountering the most bizarre of characters - a talking rabbit, a smiling cat, a dodo in search of love and a waddle of penguins, she finds herself in a surreal game of chess. Characters who work to aid her quest, though fantastical, are strikingly reminiscent of family members (friend or foe). Realising the importance of friendship and love for even the most unsavoury of characters, Alice grows an army of the bonkers, the bizarre and the brave - a frumious bandersnatch, and a knight brandishing a vorpal sword, a mad hatter help the little pawn to ultimately defeat a queen. Because of course, with the right strategy, even the smallest and seemingly most insignificant of pieces, can become the greatest. 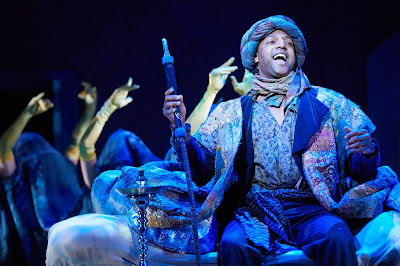 The production itself, as Culturedad noted, was akin to something you would expect to see in the West end. The digital effects were brilliant - with Alice growing to the size of the theatre, or flying on the back of enormous puppets. The Jaberwocky managed to be huge and ferocious and the surprising coda - which I shall not reveal in this review  - brought tears to my eyes as I witnessed the unbridled wonder and joy on the faces of the girls. They declared it absolutely brilliant, one of the very best performances they've seen (and we see a lot of theatre). It captured their imaginations to the extent that the very next morning Culturetot charged into our room brandishing her vorpal sword ready to slay the ferocious Jabberdaddy. There was not only a great set of professional actors, but also a host of youth actors who did a sterling job. A thoroughly scumpiferous frumabulous production. Go and see it. 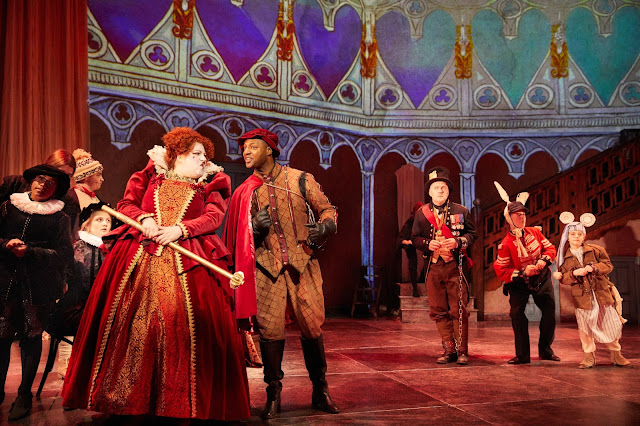 Culturebaby's verdict (6): "I liked when Alice grows tall when she ate the tart, because the background was an amazing giant screen. The Queen's voice was funny. The show was very clever because the claws of the Jabberwocky seemed real. Alice learned she could be a hero and she didn't have to leave with her Aunty - she was strong, and she learned that she has to look after friends, and they will help her too. The frumious bandersnatch was actually friendly. He helped Alice."

Culturetot's Verdict (4): "I would have liked to have played the red queen, I liked her voice. I liked Alice because she ate the tart and it was funny. The doormouse was cute - I liked the song they sang when they were having tea. Alice learned to be a White Queen - she was strong and saved her friends. I liked the caterpillar - he told the tale of the Jabberwocky." 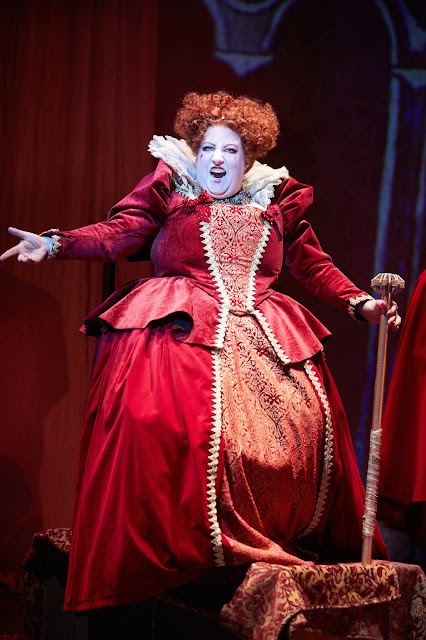 A Q&A WITH SUSANNAH VAN DEN BERG ‘QUEEN OF HEARTS’

I’ve seen a few Christmas productions at The Rose, as well as being involved in several community scratch choirs. I have always been impressed with the production values and the commitment and energy of the youth theatre. I was also excited about tackling a brand new script and original score, being involved in creating something new and fresh.

The setting of the original books has been changed to during the First World War. Using elements and characters from the two books it’s essentially a coming of age story for Alice. Through her adventures in Wonderland she gains the strength and courage to deal with the trauma and responsibilities of reality.

Tell us a bit about your character. What are you most enjoying about playing The Queen of Hearts?

The Queen of Hearts is a delicious megalomaniac, rather like a modern day dictator. I’m finding her such fun to play because she has no limits. I have the ability to be as silly or outrageous as I like because my court allows me to get away with anything. Like anyone in great power, the chance of being overthrown is always present so I’ve chosen to rule by fear.

Vocally it’s a big role - lots of shouting “Off With Their Heads” - so sustaining that will be a big task. Delivering a pretty spectacular battle scene whilst wearing a massive dress is also going to be challenging!

They’re magnifications of human nature - all elements we recognise in ourselves taken to huge proportions. They’re all things we could become.

The production sees a professional cast and a youth company perform together. What has it been like working alongside Rose Youth Company?

Really fantastic. They have such great energy and focus that could shame some other professional companies! Working with two separate casts is a joy as a performer as you get different performances to play off, meaning no show will be the same. The company really works as a true ensemble, they are generous to each other and there are no small parts. Slotting into a company like this is incredibly exciting.

The story is incredible and the families who come to see it will go on a real journey with Alice. There’s puppets, magic, monsters, a new script with an electrifying original score, some terrible jokes, beautiful costumes & scenery and snow... there’s definitely snow. Entertaining yet life affirming.

A Q&A WITH BILLY RILOT ‘TWEEDLEDUM’

I was lucky enough to be in the cast last year and enjoyed it so much I decided to audition for Alice in Winterland. Last year’s production was the best few months of my life, I made a lot of great new friends that will last a lifetime.

Alice in Winterland is about friendship, bravery and family.

Tell us a bit about your character. What are you most enjoying about playing Tweedledum?

My character is Tweedledum, he is loving fool, who is not too bright and is devoted to his twin sister even though they squabble. I enjoy playing Tweedledum because I get to do lots of clown work (including fixed points, accents and playfulness).

As Tweedledum I have to do an accent, which I have never done before on stage. It gives the show more realism and it really brings it to life.

I think the characters have such an appeal because the journey of Alice is so brave, how she goes from being a lost girl to being the brave hero and saviour of wonderland.

The production sees a professional cast and a youth company perform together. What has it been like working alongside professional actors?

It has been such an eye-opening experience for me, learning from them and working with them, the pros are also extremely nice people.

I think people should see Alice and Winterland because it is a story that all ages can understand and appreciate …there are villains, heroes, animals, talking playing cards, monsters – it’s scary, funny, sad and exciting.


A Q&A WITH REN WALSINGHAM ‘DORMOUSE’ 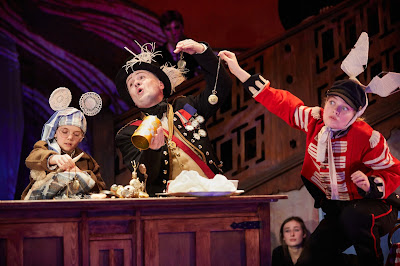 I love acting and when I saw that Alice In Winterland was on I was so happy I went to the auditions.

Alice in Winterland is about a young girl who has lost her family and one day gets sucked into the mad world of Winterland.

Tell us a bit about your character. What are you most enjoying about playing the Dormouse?

My character is a fun character, a bit cheeky and knows everything!

The physicality of a realistic mouse.

The story is relevant of anytime we live in.

The production sees a professional cast and a youth company perform together. What has it been like working alongside professional actors?

Amazing, I have learnt so much!

It’s a great family show with a twist on a classic.

Alice In Winterland will be at Rose Theatre Kingston from Thu 7 Dec – Sun 7 Jan. Tickets cost from £15 and are available online, rosetheatrekingston.org, by phone, 020 8174 0090, or from the Box Office

Disclaimer: We received tickets to the performance for the purposes of review, as always views are all entirely our own. Photographs courtesy of the Rose Theatre Press Office.
Posted by MuseumMummy at 17:30