Sounds of the Southbank 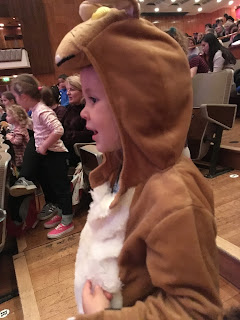 The Southbank Centre feels rather like a playground for my little ones. We've been to some lovely events that the girls associate with the venue, from family concerts to the superb Imagine Children's weekend in the spring, where the venue is taken over for a couple of weeks by kids with a programme designed entirely for the very young and offering everything from immersive theatre to storytelling, dancing, art and experimentation with instruments. During Imagine, open spaces are transformed - last Spring there was an interactive Narnia-inspired scheme complete with a home inside a wardrobe, a pirate ship with miniature sailors clambering up the rigging and various playhouses to explore. A perennial favourite fixture at the Festival Hall is also the musical lift with its chorus of voices rising and falling in pitch depending on the destination and floor you have selected. It's a task to extricate any toddler from such an enthralling experience. 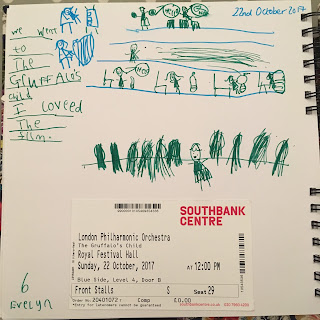 This Autumn we attended two concerts designed for families, each very different. FUNharmonics is a regular (quarterly) series run by the London Philharmonic Orchestra for children over six (though I'd say these are equally effective for younger children). I've mentioned the series before as part of an article on big music for little people here. As Sarah Kirkup noted in a rave review of FUNharmonics for Gramophone, children, far from being forgiving of mediocrity are hugely discerning. She quotes Israeli-born American pianist Orli Shaham who discusses playing to a young audience ‘I play everything from Bach to music written last year... they accept everything equally so long as the pieces are wonderful and the performers have conviction’... As Sarah notes "‘Conviction’ is the key word here – and possessing it as a performer is even more important when playing for kids than for adults. If you don’t have it, they’ll see straight through you." It is wonderful to see performers put so much into performing for the very young and exuding a level of energy that shows they believe wholeheartedly in their mission. And rightly so, this is the audience of the future, and the shapers of societal taste far after the present orchestra have laid down their violins for the last time. 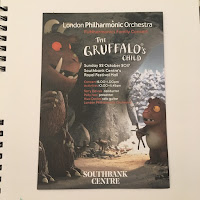 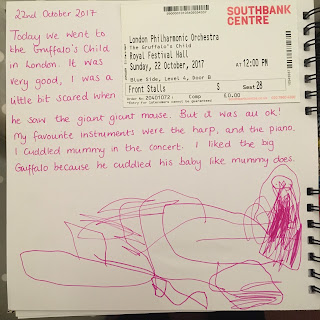 Following last year's Imagine Children's festival, where a huge highlight of the programme saw an orchestral cinematic showing of Julia Donaldson and Axel Scheffler's The Gruffalo and Room on the Broom, the LSO followed up with a concert featuring The Gruffalo's Child. These concerts begin with art activities and the opportunity to handle instruments then, by stealth, a number of orchestral pieces are introduced to warm up the audience, including on this occasion the vibrant Slavonic Dances by Dvorak and three songs from Julia Donaldson's collection. The children were taught each piece, and various actions to go with them. We particularly loved Funny Face, an earworm that two months on still occasionally surfaces as the children break into a rousing chorus. It's a delight to see the shattered parents of London gurn quite so effectively on a Sunday morning. That's the joy of children's theatre and music; it keeps us grounded. It's incongruent not to be ridiculous along with your children, which in turn is rather good for the soul. High quality narrators at these events are also a must. Every group of the orchestra gets an introduction, we are shown their unique sounds and the parts they play in the upcoming pieces. Listening along to the soundtrack of The Gruffalo's Child we are encouraged to really hear what lies behind the moving image: which instrument produces which unique effect? As I've said previously, watching a full orchestral performance of a film is an electrifying experience and it positively ruins cinema forever - without an orchestra it begins to feel flat, you want more. Hand in hand with children's theatre, this sort of concert trains the ear to crave that immersive experience, and hopefully plant a seed for life.

The second concert we attended at the Royal Festival Hall was hotly anticipated as jazz is one of my favourite genres and the children really enjoy it too. Last year we'd been to an utterly brilliant concert by Albert's band at The Royal Albert Hall (see here)  Jazz for Kids - and introduction to New Orleans Jazz . The children were taught about the rhythms that give Jazz its distinctive sound, heard the history of a movement rooted in the opportunity presented by the wholesale abandonment of military instruments, met a sousaphone (a curly tuba for marching) and had the opportunity to dance and sing with abandon to the music. The Introduction to Jazz concert on this occasion, Is This Jazz? was a BBC Concert Orchestra production, which puts on such fabulous children's concerts as the CBeebies Prom, and leads on the inspiring 10 Pieces Project. The orchestra was also led by a woman, Holly Mathieson - important role modelling for the girls to see in a world where male conductors are the norm and it took 118 years for a woman to conduct the Last Night of the Proms. It also featured a young choir, always great for future aspiration for any little audience member. 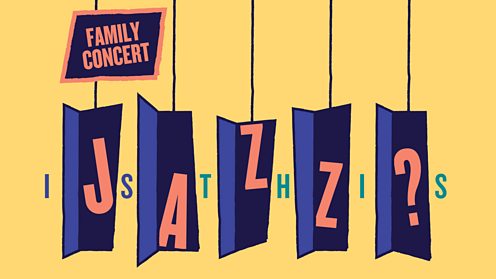 On this occasion an excellent idea led to a mixed experience - children's concerts don't always get it right. The first half was brilliant and well pitched, and I'd really encourage the orchestra to run an event like this again along these lines. Energetic narrator, Pete Letanka, took the family audience on an exciting journey through the various places Jazz can be found. Do we always recognise music as Jazz? There's so much to be found in film and TV as well as shops, clubs, and in the concert hall. We sought out the sneaky jazz hiding all around us, through learning about the rhythms and re-creating these as a audience. The energetic opening showcased a cornucopia of TV theme tunes, we were treated to the Mambo from Westside Story and Gershwin's Summertime, film hits from Toy Story and La La Land, favourites from Duke Ellington and Dizzy Gillespie and then some pieces we wouldn't think of as jazz, such as Shostakovich. There was lots of interaction and engagement. Finally we were introduced to the idea of improvisation where our narrator, also a musician, demonstrated effectively what could be done with a tune as simple as twinkle twinkle. With the rousing coda of It Don't Mean a Thing, the concert should have been left at that. The section that didn't work so well as a world premier of an improvisation piece. We wanted to love it, but it was long, failed to be gripping enough and led to much shuffling and even early exits from the families in the audience. It took some energy for those remaining to rouse themselves to join in at the ending. Even mistakes like this however lead to good discussion. Why do we like certain pieces, what pictures do they paint in our minds, why do other pieces fail to inspire us? Why do some lines stick in our heads and others fail to linger? The kids love jazz and we are grateful for those orchestras that experiment and showcase a variety of genres for a young audience.

FUNharmonics concerts from the London Symphony Orchestra are a regular feature at the Royal Festival Hall. Keep an eye on their events here. You can see the BBC Concert Orchestra's forthcoming concerts here, including upcoming events such as a live orchestral screening of Harry Potter and the Chamber of Secrets. An upcoming blog with explore last year's Imagine Children's Festival in a little more detail and give you a taste of what to expect this year.

Disclaimer: We received tickets to the events in exchange for an honest review. As always all views are our own.
Posted by MuseumMummy at 10:38