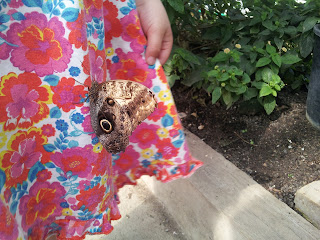 The last two weeks have been focussed on Natural History. This wasn't planned, but it all seems rather appropriate in a week when we've seen our wonderful athletes push the human body to its limits in the London 2012 Olympic games. We have 43 medals as I write and even I'm in danger of becoming more interested in sport... 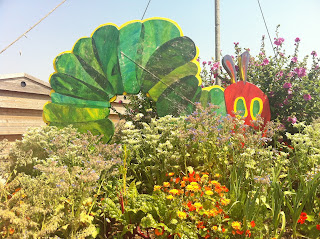 Last week we continued our unexpected summer theme of sharks and butterflies, an unlikely marriage first set by Hirst's magical retrospective at the Tate Modern (for an account of our first visit see here). Each time we have returned to Hirst's exhibition, Culturebaby has found the live butterflies the most exciting element. We therefore jumped at the invitation to visit Butterfly World in Chiswell Green with our friends. At present, 'world' is rather an overstatement (think tent), but the ambitious plans for the site promise a rainforest dome with 10,000 tropical butterflies, thunderstorms and mock Mayan ruins in 2013. Belize in St Albans? Yes please!

The site contains a number of different insect houses. The butterfly tent was sweltering but stimulating, with a stunning selection of bright butterlies which flew around heads and landed on the children. With help from the friendly staff, the 4 year old was able to excitedly locate butterfly eggs on the leaves. Culturebaby bounced with excitement and flapped her arms like wings as she gazed around her. The insect study centre was equally enthrawling for children. Culturebaby saw a butterfly emerging from its chrysalis and sat on convenient wide ledges to examine tanks of stick insects, cockroaches,  locusts, and various types of mantis, while her little buddies also handled giant snails. Next door we also found a colony of leaf cutter ants, carrying leaves long distances along rope to line their 'city' (visible as a cross section). This was a wonderous sight for adult and baby alike, and Culturebaby's little 9 month old  friend couldn't take his eyes off the activity. 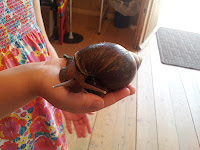 We luckily chose a beautiful hot day and were also able to spend hours wandering through the fascinating designed gardens. Culturebaby and pals particularly loved venturing through a giant flowerpot into a garden from Brobdingnag or the Borrowers with giant flowerpots and garden tools; exploring the rooms of a house from Wonderland (complete with Madhatter's tea party setting); and investigating a garden with numerous spangly or surreal installations. With lots to touch, see, smell and hide behind, and with flowers and plants designed to attract butterlies, these gardens were a wonderful surprise. 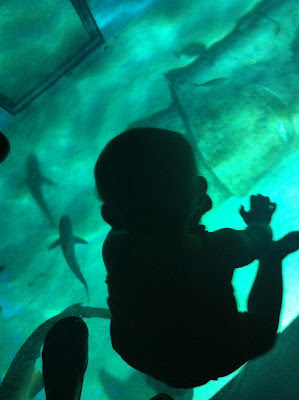 Two days later,  we met another old school friend and her sixth month old daughter at the London Aquarium. After the success of our visit to the Horniman (see here), we were both really excited to take our babies to see the enormous tanks teeming with fascinating species. I had never visited the Aquarium before and didn't know what to expect. With so many brilliant free museums, it is an expensive trip (look out for 2 for 1 offers), and as it is a private business it has annoyingly commercial elements (expect to be collared for a cheesy photo on entry and offered face-painting and other gifts as you move round) but it was also really great for the babies, who loved it (as did we)... 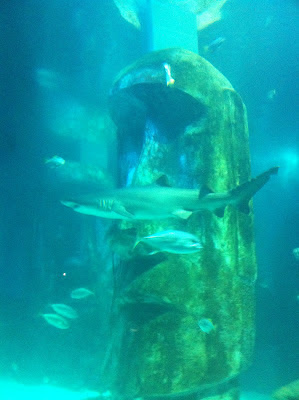 The entrance was one of the best experiences. We were lucky to steal a quiet moment and Culturebaby was able to sit alone on the (thick!) glass walkway floor with sharks swimming below. As we moved through the themed rooms, Culturebaby wriggled and chatted away and placed her hands against the glass. There were some great curved tanks and the babies could lean against them and examine their inhabitants from above. Big hits were the giant tank replicating a Pacific reef complete with 16 sharks, an area full of bright tropical fish (think Nemo and friends), turtles, a crocodile and the penguins. It was sometimes hard to pinpoint the specific things which made Culturebaby giggle and babble with excitement (which she did rather a lot) and sometimes her interest was caught by something unexpected, but she clearly found the whole experience thoroughly stimulating. The journey was also peppered with interesting facts and environmentally conscious messaging, which was interesting for us and I think will bring a whole new dimension for Culturebaby when she's a little older. 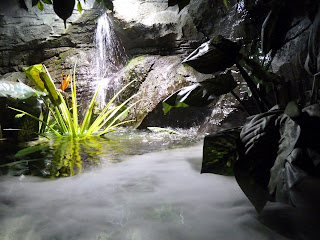 I'm also trying to pick out appropriate books and toys from our collection to accompany what we see (remember the champion charity shopping mother?). Last week we attended our first baby book club (a fabulous idea and run by a friend of ours as part of the Picture Book Picnic). Appropriately one of the books on the menu was a gorgeous new book by Petr Horacek called Butterfly Butterfly. Radiant is indeed the right word for this stunningly coloured book complete with story and pop up butterfly. It's a little delicate for tiny hands, but supervised I think it 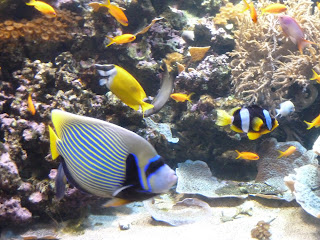 is fine for babies. Similarly amazing is a noisy book we found in the Horniman Museum bookshop called Bugs by Maurice Pledger. This brilliant series allows the reader to hear the recordings of the sounds associated with a particular environment whilst looking at the appropriate pop-up pictures. Again it is delicate, so needs to be held out of the reach of little paws, but Culturebaby still loves it. Other good bug related reads are the eternally popular and fabulous The Very Hungry Caterpillar by Eric Carle; The Very Lazy Ladybird pop up board book by Isobel Finn and Jack Tickle; one of Culturebaby's earliest favourite books - Feely Bugs by David A Carter 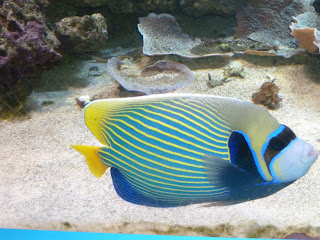 (we have a version from 1995 which could be sturdier, but it has really good feely materials and was one of the first books that Culturebaby really enjoyed - she turned the pages backwards and forwards and really examined the bold feely images); a retro find from my brother's old collection - My Garden, an early fold out board book about bugs by Rod Campbell; and finally the wonderful Fuzzy Bee and Friends cloth book by Roger Priddy. This series is Culturebaby's absolute clothbook favourite with catchy rhymes, touchy feely elements, bright colours and easy to handle and satisfyingly crunchy pages.

To accompany our underwater adventures, we also have the equally fab Squishy Turtle cloth book from the above series. Here are another few underwater themed books Culturebaby has enjoyed looking at from our collection: 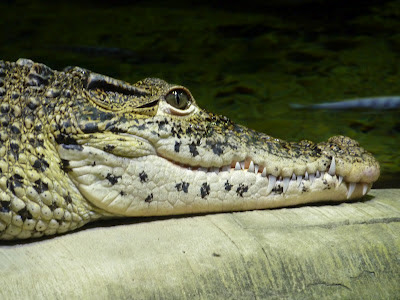 It must also be said that the value of cool bathtoys also cannot be underrated in this area. Other than Archimedes the rubber duck, we have great sets of squirty and sponge sea creatures and bath books, which Culturebaby definitely counts amongst her favourite toys (as well as being really educational). She often tries to go to bed still clutching Captain Crab or one of his comrades. For dryer playtimes we also have a giant snail shape sorter (we'll cover this in a later post but shape sorters are Culturebaby's current favourite thing) - if you ignore the slightly annoying tune it is not a bad and quite simple one - and of course we have the seemingly compulsary but wonderfully sensory pram accessory Freddy the Firefly. We also found a brilliant set of Baby Einstein Animal Discovery Cards a few months ago. Culturebaby loves sorting through these, examining the pictures and (hopefully) learning to recognise some of the animals from their portraits.

Next stop, Culturebaby's first trip to the Natural History Museum...
Posted by MuseumMummy at 20:38