Walking in the Air

Culturebaby was two in October, and this was the first Christmas when she really understood much of what was going on. For us this reawakened the full magic of childhood with its sherry and mince pies left beside the chimney, carols and dancing, stories of baby Jesus and renditions of the Night before Christmas. Culturebaby fell in love with it all and I almost began to believe that sleighbells really would ring through the air as Dasher and Danson delivered presents for my babies. Alongside the tree and nativity, which both really captured Culturebaby's interest (she still takes Mary and Joseph for a nap with her and gives baby Jesus rides on her toy carousel), our Christmas - despite a lack of snow - was utterly Snowman themed.

Culturebaby has only recently started watching television, and we have been really selective about it, but nothing could have been a higher quality or more magical baptism than the film of the Snowman. Even now in January, this or its sequel The Snowman and the Snowdog, are still viewed almost daily. So many of Culturebaby's current points of reference relate back to this little work of art; satsumas, coal, hats, the fireplace, refrigerators, anything to do with aviation, little boys in general... It has prompted art projects, imaginative play, primitive scientific experiments and a host of conversations on everything from loss of a pet to why we get Christmas presents. For a good few weeks I was also instructed by my tiny front seat driver to sing 'Waa-in-air' as I puffed up our local hill pushing our behemoth of a double pram as Culturebaby pretended to fly. Mothers can have no inhibitions... 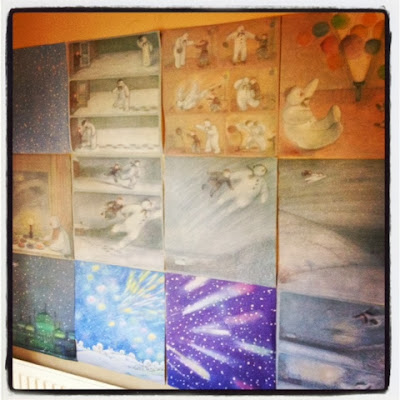 The Snowman is wonderful on so many levels as an educational tool. First of all it is beautifully illustrated - essentially an animated picture book. It also has no words and therefore allows conversation throughout. Culturebaby chatters away and narrates the story or points out items and events to everyone around, especially to 10 week old Culturetot. Then there is the amazing classical score that is so distinctive and dynamic that it alone can paint pictures in the mind's eye. I was absolutely stunned that as we listened to the audio soundtrack in the car for the zillionth time, Culturebaby began to narrate what was happening in the story accurately from the music alone. Our little sponges take so much in at this age that it is so exciting to witness the development of a visual and audio connection like this. Then of course there is the associated original storybook which, again with its lack of words, is able to facilitate conversation and stimulate observation in a unique way. Interestingly the original story is different and involves a trip to Brighton and the sea, and not the snowmen's ball, but this hasn't really phased Culturebaby and has provided additional material for conversation as we have looked at it. We've also been lucky enough to play with a sequence of wall posters Nanny got hold of for us. These really excited Culturebaby as she was able to peruse these large images at leisure, look at them while she was eating or playing, and narrate key parts of the story.

Finally, the story is moving and instructive on so many levels. Ultimately it is a tale of belief, living life to the full and dealing with loss. It has prompted different thoughts for me as an adult than I gleaned from it as a child, and Culturebaby at two can clearly not understand it all. However, there have been moments when she has watched the melting scene with tears in her eyes and my explanation that the Snowman could perhaps come back one day when it snows again gave her hope - which was fortunately corroborated (no doubt to the relief of hoardes of the middle aged who have always had to deal with the loss of the original Snowman) by the sequel released last year: The Snowman and the Snowdog. This sequel is also wonderful. Though the soundtrack is rather less distinctive, the film takes a similar format to the Snowman. A new little boy moves into the cottage and shortly after his old dog dies. He discovers a box under the floor containing the Snowman's attire and a photograph, which he uses to recreate our old friend, and - missing his pet - he also shapes a snowdog. These characters come alive and go on adventures, this time including an aeroplane and a snowman winter olympics. The greatest kindness of this wonderful sequel is that, though we again lose our eponymous hero to the sun, the snowdog is transformed by a Christmas gift of a collar into a real puppy. The little boy is no longer left alone.


As Culturebaby has been so in love with the theme, we have worked with this interest and done a number of really enjoyable toddler activities related to The Snowman, and I wanted to share them here as they have been a brilliant accompaniment to the film and book. 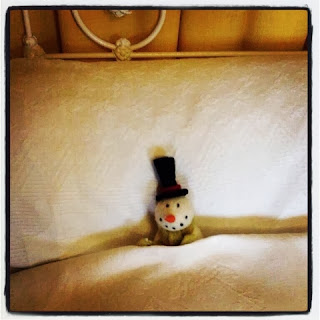 1. Snowman hunting - The National Trust have done themselves proud this winter with toddler friendly activities, bringing the houses and gardens to life. One of the simplest and most effective was a snowman trail around Disraeli's house Hughenden. Hidden amongst the rooms, which were atmospherically dressed for a Victorian Christmas, were a number of little snowmen for children to discover. Culturebaby is at the age where one of the best museum activities for her is finding things, especially repeated sightings of the same object, and this trail was perfect. She talked about it for days after, and mentions the snowmen every time she looks at a photograph of the front of the house. If she gathers these sorts of memories and associations of joy in every cultural location she visits I'd be thrilled. Of course, this simple activity could be set up anywhere - even in the back garden. Culturebaby has also really enjoyed spotting snowmen everywhere and anywhere (on buildings, in books, on Christmas decorations). We even made a surprise sighting of a retro soft toy at the V and A Museum of Childhood, which really impressed her. 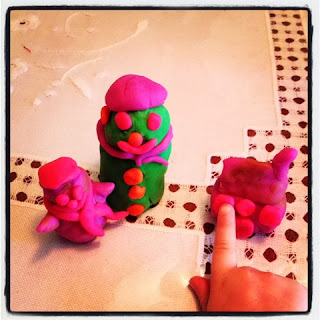 2. Art and modelling- Culturebaby is just beginning to draw with clear intention, and produce shapes, which slightly resemble the things she says they are! Almost everything she draws at present, when quizzed, is identified as The Snowman or the little boy. Using playdoh is another way to foster this interest, and she has really enjoyed modelling the characters, and watching others do so - as well as 'melting' (squashing) the snowman afterwards. We have also really enjoyed creating the scene of the house from playdoh and acting out certain parts of the book. Making the footprints in the snow was particularly satisfying! 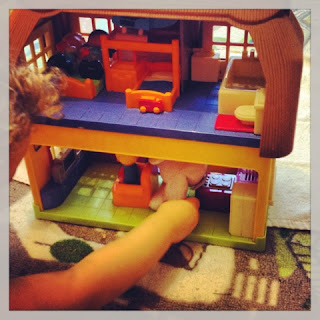 3. Imaginative play with Happyland toys - We created a snowy landscape with a large white towel and, listening to the audio soundtrack, used one of Culturebaby's play cottages and characters, with her toy snowman, to act out parts of the story. I also filmed her creating certain scenes and she loves watching these again and again on my phone.

4. First science experiments - We took a few ice cubes and let them melt in a bowl at room temperature. We talked about what was happening and why - and of course why the Snowman had started to melt when he sat too close to the fireplace. Practical activities like this have also helped her understand and discuss differences in temperature. She's shown much more awareness of this since.


5. Dancing and flying - There is little better than dancing with a joyful toddler. We have, on many occasions danced together to the musical box and the Snowmen's ball, and my arm muscles are bitter but better for the amount of flying around the room Culturebaby has requested in recent weeks. It is rather tricky however to perform in all situations when no was not an acceptable response Mummy!  Passers-by on the motorway, for instance, must have been rather amused by us all repeatedly moving our heads and shoulders or re-enacting a upper limbed version of the highland fling (driver exempted for the latter) in sync to the soundtrack.

6. Other reading - I've been really impressed by the associations Culturebaby has made with other books on the topic. She took a long time over examining a melted snowman in the fabulous Snow is my Favourite and my Best by Lauren Child. Midway through this story she got up, retrieved her book of the Snowman, found the melting scene and looked from one book to the other a number of times and earnestly said to me "they melted Mummy". She then went back and back to this same part of the book several times before we were able to get through the story. She has since been spotting snowmen in many other books from the genius The Jolly Christmas Postman by the Ahlbergs, to Scheffler's Pip and Posy's The Snowy Day, Hubery and Ball's Christmas with You, Moss and Kneen's The Snow Bear and others. It has been really interesting and enjoyable to see and hear the connections she has been making between these different stories.

And finally, and most obviously, we keep talking about and can't wait for the real thing... some snow to really bring it all to life. I have a stock of satsumas on the go, but I'm rather worried that anything other than a green hat and scarf won't cut the mustard. Time to trawl the charity shops perhaps? And let the magic begin...
Posted by MuseumMummy at 23:14